Around 34 million Americans—roughly 1 in 10—have some form of diabetes, and another 88 million have prediabetes. Read on for an overview of how diabetes works; how Type 1 differs from Type 2; common symptoms; and how you can prevent, manage, or (in the case of Type 2 diabetes) even reverse it. 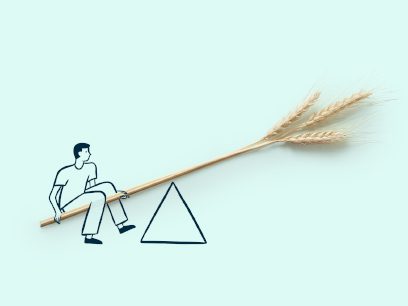 Diabetes, or diabetes mellitus, is a group of chronic conditions in which the body is unable to efficiently convert food into energy.

When we eat, our body breaks food down into glucose (sugar), which is released into our bloodstream to be absorbed by cells as needed. Insulin, a hormone secreted by the pancreas, helps glucose make its way into cells.

In people with diabetes, the pancreas either doesn’t produce enough insulin or the body is unable to properly use insulin. This leads to too much sugar in the bloodstream, which can cause serious health problems over time.

Everything You Need to Know About Insulin Resistance and Diet

Type 1 diabetes (T1D) is an autoimmune condition in which the pancreas produces little to no insulin. With T1D, the immune system attacks the pancreas and destroys the cells that would produce insulin. Formerly known as juvenile-onset diabetes, T1D is usually diagnosed during childhood. Type 1 is less common than Type 2 diabetes, representing about 5–10 percent of total diabetes cases in the United States. However, rates have been steadily increasing in recent years. Type 1 diabetes is primarily treated with insulin, oral medications, and blood glucose monitoring. Proper nutrition can help manage symptoms and reduce complications.

Of the 34 million Americans who have diabetes, the vast majority (around 90–95 percent) have Type 2 diabetes (T2D). With this form of diabetes, the pancreas produces insulin, but cells stop responding normally to it (a process called insulin resistance). The pancreas tries to compensate by secreting more insulin into the blood. This works at first, but eventually, the pancreatic cells responsible for producing insulin become dysfunctional from the excess workload. At this point, blood glucose levels begin to rise to the diabetic range. T2D is primarily treated through lifestyle measures, though insulin and oral medications are sometimes prescribed.

Is the Sugar in Fruit Healthy or Unhealthy?

At the core of prediabetes and Type 2 diabetes is insulin resistance: a condition in which the body’s tissues become “blind” to insulin. The precise cause of insulin resistance still isn’t fully understood, but a number of factors, both environmental and genetic, seem to contribute. One of the primary risk factors is being overweight or obese. For a fascinating deep dive on insulin resistance, see “Everything You Need to Know About Insulin Resistance and Diet.”

The Role of Fat

Scientific evidence points to fats, particularly saturated fats, as a major culprit behind insulin resistance and Type 2 diabetes. That’s because excess fat has the effect of “gumming up the locks,” preventing insulin from importing glucose into cells, as Michael Greger, MD, explains: “Fat in the bloodstream can build up inside the muscle cells, create toxic fatty breakdown products and free radicals that can block the signaling pathway process. So, no matter how much insulin we have out in our blood, it’s not able to open the glucose gates, and blood sugar levels build up in the blood.”

Because diabetes leads to elevated blood sugar, there’s a popular misconception that sugar causes diabetes. The reality is more complicated.

While diets high in added sugars have indeed been linked to an increased risk of Type 2 diabetes, there are a number of potential reasons for this link. For one, refined sugars (and other ultra-processed foods) make it easy to exceed one’s caloric needs, promoting weight gain, obesity, and a heightened risk of insulin resistance and T2D. Another possible explanation is that people who consume a lot of added sugars tend to have unhealthy overall dietary patterns or other lifestyle habits that would increase their risk for T2D.

Additionally, sugars consumed as part of whole plant foods—e.g., a piece of fruit—do not appear to increase the risk of diabetes. In fact, research suggests the opposite: A large-scale observational study found that greater consumption of whole fruits was associated with a decreased risk of Type 2 diabetes.

The following symptoms can be warning signs of Type 2 diabetes, according to the American Diabetes Association.

If you’re experiencing any of these symptoms, let your physician know.

How to Get Tested

Also known as an HbA1c test or hemoglobin A1C test, the A1C test looks at a blood sample to determine your average blood sugar over the past three months. Below are the ranges used to interpret A1C results.

Diabetic ketoacidosis is another potentially serious condition: Unable to properly use glucose, the body begins breaking down fat tissue to use as fuel, creating a buildup of acids in the bloodstream. Diabetic ketoacidosis is more common in people with Type 1 diabetes than Type 2 diabetes, as people who have Type 2 diabetes still produce some insulin.

Whole grains, fruits, vegetables, and overall plant-based eating patterns may help prevent Type 2 diabetes and improve outcomes for people who already have diabetes. Let’s take a look at the research.

Eliminating animal products and moving to a diet rich in whole and minimally processed plant foods can significantly reduce the problems created by Type 1 diabetes. Although there’s no cure for this type of diabetes, Cyrus Khambatta, PhD, who co-founded the Mastering Diabetes program with Robby Barbaro, MPH, notes that following a low-fat, WFPB lifestyle can:

The Dangers of Low-Carb Diets

If you have diabetes, you may have been told at some point to eat a low-carb, high-fat diet, such as the ketogenic diet. While these diets can help normalize blood sugar levels in the short term, they fail to address the underlying cause of Type 2 diabetes: insulin resistance.

This is why people on high-fat diets might experience high blood glucose immediately after eating fruit, whole grains, or other carb-rich foods. “From a biological perspective, this makes perfect sense, because the more fat you eat, the less tolerant of carbohydrates your muscles and liver become,” explain Khambatta and Barbaro in their book Mastering Diabetes. But “fruit is not to blame for elevated blood glucose; it’s the high-fat foods you ate before eating fruit that makes it difficult for your muscles and liver to metabolize glucose effectively.”In the long term, high-fat, low-carb diets also increase the risk of heart disease and premature death from all causes.

If you’ve already been diagnosed with prediabetes or Type 2 diabetes, you can likely improve your outcomes by eating more whole plant foods and avoiding animal products and highly processed foods.

For inspiration, check out these first-person testimonials from people who reversed Type 2 diabetes after adopting a whole-food, plant-based diet.