The recent film What the Health raised the question as to whether sugar or other carbohydrates cause diabetes. Because blood sugar levels are high in diabetes, a common notion has held that eating sugar somehow triggers the disease process.  The American Diabetes Association and Diabetes UK have labeled this notion a “myth,” as has the Joslin Diabetes Center, which wrote, “Diabetes is not caused by eating too much sugar.” These and other organizations have worked to educate people about the causes of diabetes and the role that foods play in the disease process.

Type 1 diabetes is an autoimmune disease. Type 2 diabetes—the most common form of the disease—is caused by insulin resistance and pancreatic failure. Sugar can play an aiding and abetting role in diabetes, but the idea that “eating sugar causes diabetes” is simplistic and interferes with efforts to help the public understand the actual causes of the disease and how to protect themselves and their families. Here is what you need to know:

Sugar is the Body’s Fuel

The human body runs on glucose, a simple sugar. Just as gasoline powers your car, glucose powers your muscles, your brain, and the rest of your body. Glucose comes from fruit and from starchy foods, such as grains, beans, and potatoes, and your body can also produce it when needed. Without it, you would die.

What Fuels the Diabetes Epidemic?

In Japan, China, and other Asian countries, the transition from traditional carbohydrate-rich (e.g., rice-based) diets to lower-carbohydrate Westernized eating habits emphasizing meats, dairy products, and fried foods have been accompanied by a major increase in diabetes prevalence. Similarly, in the U.S., a meat-based (omnivorous) diet is associated with a high prevalence of diabetes, compared with dietary patterns emphasizing plant-derived foods. In the Adventist Health Study-2, after adjusting for differences in body weight, physical activity, and other factors, an omnivorous diet was associated with roughly double the risk of diabetes, compared with a diet omitting animal products. 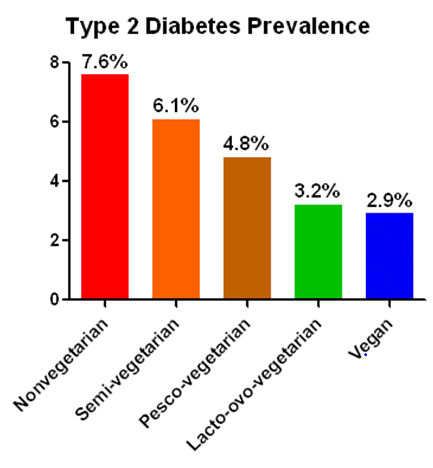 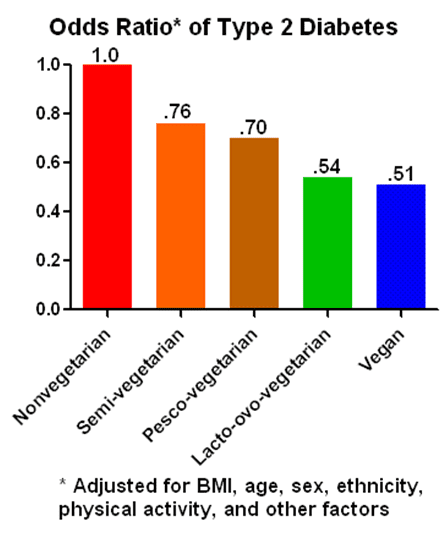 In clinical trials, when people change from an omnivorous diet to a low-fat, vegan diet, diabetes typically improves significantly.

These findings from observational studies and clinical trials resonate with the finding from magnetic resonance spectroscopy showing that fat inside the cells leads to insulin resistance, the first step toward type 2 diabetes.

Sugar is Falling, Diabetes is Rising

It has become fashionable in recent years to blame sugar for health problems, to the neglect of other important contributors. Sugar consumption has actually been falling in the U.S. since 1999, when bottled water and sugar-free beverages began to edge sodas off the shelf. At the same time, consumption of cheese and oily foods has steadily increased, as has diabetes prevalence. This suggests that something other than sugar is driving the diabetes epidemic.

Still, Sugar is not Health Food

So, our bodies actually run on sugar—that is, glucose. Moreover, sugar has only four calories per gram (much less than fats and oils, which have nine calories per gram), and sugar’s calories can be used for metabolic needs or stored as glycogen. So, does that mean that added sugars are innocuous?

Certainly not. Although glucose is an important fuel for the body, there is no physiological need for added sugars. Because sugar dissolves into sodas and snack foods, it is easy to consume surprisingly large quantities of it, contributing to weight gain. In turn, higher body weight can make type 2 diabetes more likely to occur. Some have also suggested that excess ingested sugar, particularly fructose, may contribute to diabetes risk in other ways.

A number of studies have looked for relationships between sugar (especially sugar-sweetened beverages) and diabetes risk. Many have found no significant relationship, apart from sugar’s extra calories that lead to weight gain. For example, the Women’s Health Study, the Atherosclerosis Risk in Communities Study, the Black Women’s Health Study, and the Multi-Ethnic Study of Atherosclerosis found no significant associations between sugar consumption and diabetes risk after adjustment for measures of body weight. Some studies have had mixed results, exonerating sucrose, but indicting glucose and fructose., And some studies have shown associations between sugar-sweetened beverages and diabetes that persist after adjustment for body weight.,

A 2015 meta-analysis summarized the results of 17 cohorts, concluding that, after adjustment for body weight, a daily 250 mL serving of sugar-sweetened beverages could increase diabetes risk approximately 13 percent. These observational studies do not necessarily indicate cause and effect. Sodas are often accompanied by cheeseburgers, chicken nuggets, and other unhealthful foods. That is, soda consumption can be a sign of a diet focusing on fast foods or an overall unhealthful diet. And, sugary snack foods (e.g., cookies and snack pastries) are often high in fat; the sugar lures us in to the fat calories hiding inside. Some, but not all, observational trials have sought to control for these confounding variables. The meta-analysis authors also cautioned that they had identified significant bias, suggesting that public interest in the issue may have led investigators to favor research showing ill effects of sugar and to neglect to publish data seeming to exonerate sugar.

The roots of type 2 diabetes remain in insulin resistance and pancreatic failure, and the blame for the current diabetes epidemic lies in an overall dietary pattern emphasizing meat, dairy products, fatty foods, and sugary foods, rather than simply in sugar alone.

Diabetes is a serious disease. Its most common form, type 2 diabetes, has become a worldwide epidemic as Western eating habits spread. An understanding of its causes is essential to identifying means of combatting it. A diet emphasizing vegetables, fruits, whole grains, and legumes and avoiding animal products helps prevent diabetes and improves its management when it has been diagnosed.

The idea that “eating sugar causes diabetes” is inaccurate. Nonetheless, avoiding added sugars is a helpful step, and it should be taken in addition to a healthful plant-based eating pattern, not instead of it.

This article originally appeared on the Physicians Committee for Responsible Medicine website and was reprinted with permission.

Dr. Neal Barnard is an adjunct associate professor of medicine at the George Washington University School of Medicine in Washington, D.C., president of the Physicians Committee for Responsible Medicine, and a New York Times bestselling author of 18 books and more than 80 scientific publications. In 2003, he was funded by the National Institutes of Health to test the benefits of a plant-based diet for Type 2 diabetes. His practice focuses on diabetes and other metabolic problems, quantifying the power of nutritional interventions in research studies that have been cited by major medical organizations and the U.S. government. He became a fellow of the American College of Cardiology in 2015, and received the Trailblazer Award from the American College of Lifestyle Medicine in 2016. Find him on Facebook and Instagram.