Acne is the most common skin condition in the United States, affecting as many as 50 million people annually, according to the American Academy of Dermatology. While it is most pervasive in adolescence, rates of adult acne are increasing. One out of three total acne office visits are made by adult women, according to a paper in the Journal of Drugs in Dermatology. One study in the Journal of the American Academy of Dermatology found that 54 percent of women and 40 percent of men reported having some form of acne. 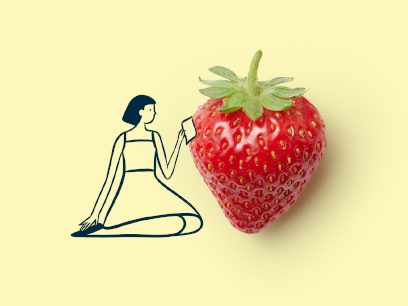 Acne is mediated by hormones. With the start of puberty, the hormone androgen activates oil glands, called sebaceous glands, in the pores. A bacterium called propionibacterium acnes lives in the pores. As bacteria and oil proliferate, they can mix with dead skin cells to clog pores or create inflammation. The areas of the body that have the most sebaceous glands—the face, neck, chest, shoulders, and back—are most affected.

Some women experience breakouts cyclically at certain times during their menstrual cycle, during pregnancy or during perimenopause or menopause. Acne can also occur as a side effect of medications or a symptom of a health condition such as polycystic ovary syndrome. Acne can also be exacerbated by stress, sweaty workouts without prompt hygiene, or certain skin care products or makeup.

Severity of acne runs along a spectrum.

How to Eat for Healthy Skin

A growing body of epidemiologic and clinical research shows an association between diet and acne, as noted in a paper in the Journal of the Academy of Nutrition and Dietetics. Research repeatedly implicates foods that are prevalent in the standard American diet, especially sugar, refined carbohydrates, processed foods, and dairy.

The Link Between Skim Milk and Acne

DO SPICY FOOD, ALCOHOL, OR CHOCOLATE CAUSE BREAKOUTS?

Spicy food and alcohol can worsen rosacea, an inflammatory skin condition that is sometimes mistaken for acne because they can look very similar. In rosacea, however, you don’t have blackheads and whiteheads, just general redness from dilated blood vessels at the cheeks and nose with inflamed red bumps. Foods that cause flushing—like spicy food, alcohol, and hot beverages—can cause rosacea to worsen.

When it comes to chocolate and breakouts, the answer is complicated. Many chocolatey products contain added dairy, sugars, and fats—all of which can trigger breakouts. A 2015 study attempted to dig deeper into this question by focusing on dark chocolate, which has fewer additives. Over the course of four weeks, 25 acne-prone males consumed 25 grams of 99 percent dark chocolate daily. After just two weeks, researchers did find a statistically significant increase in acne compared with the subjects’ baselines. This could be due to chocolate’s naturally high fat content, but more research is needed.

Epidemiological evidence from non-Westernized cultures have found drastically lower rates of acne in indigenous populations. Thirty years ago, over a seven-week period, a Swedish doctor named Staffan Lindeberg visited all 494 houses of the small island of Kitava in Papua New Guinea. He examined 1,200 residents and found no cases of acne. “Not a single papule, pustule, or open comedone was observed in the entire population examined,” the researchers wrote in a study published in JAMA Dermatology. The Kitavan diet consisted predominantly of carbohydrates in the form of low-glycemic tubers, fruits, and vegetables.

Other research has found that when native cultures are introduced to Western culture, they experience skin changes. Otto Schaefer, MD, spent 30 years treating the Intuit Eskimo people in Arctic Canada and reported that acne was absent when they were eating in their traditional whole food manner as hunter-gatherers with a diet rich in foods like caribou, seal, fish, rabbit, birds, and berries. When they assimilated to a Western diet high in carbonated drinks, chips, and other processed foods manufactured with added fat, salt, and sugar, acne prevalence became similar to the levels seen in Western societies.

In June 2020, a large study out of France looked at adult acne and diet. Researchers surveyed more than 24,000 people and found that people who reported the most acne had diets highest in milk, sugary beverages, and sugary and fatty foods. “Our results may support the hypothesis that the Western diet (rich in animal products and fatty and sugar foods) is associated with the presence of acne in adults,” the researchers wrote in the journal JAMA Dermatology.

The Best Diet for Acne: A Q&A with Nina and Randa Nelson, Co-Authors of “The Clear Skin Diet”

IS THERE A DIET TO CURE ACNE?

While research on diet and acne is still ongoing, avoiding potential trigger foods—dairy and sugar and other refined carbohydrates—might be a good place to start if you’re looking to reduce flare-ups. Consult a dermatologist for more personalized guidance.

Anecdotally, Forks Over Knives has heard from people who have had success in clearing up their skin after adopting a whole-food, plant-based diet:

This may be because a whole-food, plant-based diet is free of dairy and highly processed foods and/or because plant foods are high in vitamins, minerals, and phytonutrients that have antioxidant and anti-inflammatory effects. Additionally, a diet rich in plant foods is high in fiber to help stabilize blood sugar and ward off hormonal shifts that can lead to acne. The fiber also feeds good gut microbes, which can help reduce skin inflammation.

Check out our Plant-Based Primer to learn more about adopting a whole-food, plant-based diet.

Diet and Depression: Exploring the Connection