I Went Plant-Based and Conquered My Cystic Acne

For years, Kiernan battled cystic acne, attempting to keep breakouts at bay with medication and topical treatments. Nothing made a difference—until she changed her diet.

My family has always been fairly health conscious. My mom and dad worked out and tried to teach us to eat healthy, at least most of the time. A lot of our meals consisted of meat and veggies, as my dad has a gluten intolerance. I have three younger brothers, and our parents were always pushing us to eat more protein. I ate a lot of meat, cheese, butter, and eggs, often in low-carb wraps or by themselves.

Painful Breakouts
When I was 16, my skin started breaking out. My mom and my grandma had both dealt with cystic acne in their teens, but theirs hadn’t appeared as quickly or caused as much damage. As the years went by, my skin refused to improve. My parents and I tried everything from benzoyl peroxide face washes to chemical peels, none of which helped for more than a month.

It wasn’t until I was 19 that I started taking antibiotics. Antibiotics were the first thing to help from the inside out. That was my lightbulb moment: I realized that something internal was causing the cysts to form.

Eventually, though, the antibiotics stopped making a difference. I tried probiotics, but they stopped helping after a while, too. In June 2017, my skin was still breaking out. I had deep, pitted scars and large, painful cysts that were difficult to cover even with the best makeup. Finally, I’d run out of options.

A Taste of Change
That next month I started a “cleanse,” something I’d done before but never to this extreme. I cut out all dairy, gluten, sugar, and fast food. During this time, I told my mom how expensive the cleanse was, and she suggested a meal plan that was completely plant based and cost under $25 a week. I had nothing to lose, so I tried it. I noticed that my skin improved slightly during the part of the cleanse when I wasn’t eating animal products. That was my first introduction to vegan eating.

But after that month-long cleanse, I went back to eating the way I had before, and my acne flared up again. By November, I was at my wits’ end. I needed a long-term solution. I had always joked about going vegan as a last-ditch effort. Finally, in desperation, I went vegan two weeks before Thanksgiving.

Clear Results
Sticking to a vegan diet was rough at first, and I definitely cheated over the holidays. I missed pizza so much I would have given my left pinky toe for a slice—but by the New Year my skin was looking better than it had in a long time. It took a couple months, but the cysts cleared up. I’ve been plant-based ever since, and I haven’t had a flare-up of cystic acne in over four months. My skin is clearer; my energy is higher; and, for the first time since puberty, I’ve been able to keep a stable, healthy weight. I’ve started weight training, which has increased my energy even more. I’ve been able to encourage my friends and family to eat more plant-based meals and to try different vegan foods. I even made a fully raw pineapple cake for my family over Christmas. It’s been nine months since I started this vegan journey, and I don’t plan on ever going back! 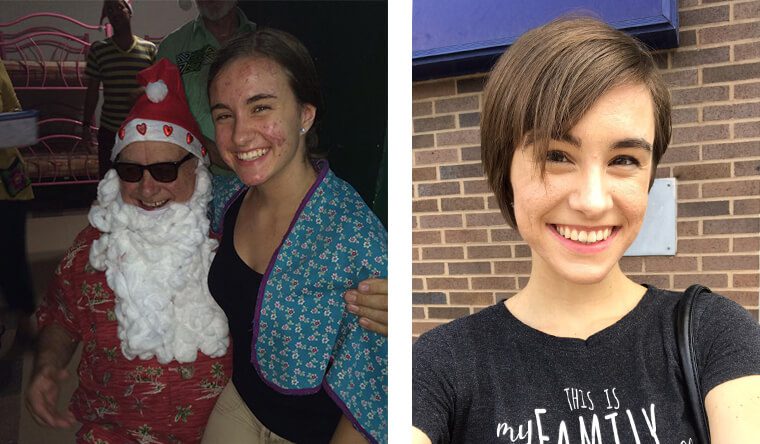