The Best Diet for Acne: A Q&A with Nina and Randa Nelson, Co-Authors of “The Clear Skin Diet”

When Nina and Randa Nelson, the vibrant, bright-faced twins behind The Clear Skin Diet were teenagers, they had what Nina calls “a normal amount of zits.” But as the rising YouTube stars—who were also working in commercials and doing music videos—reached age 20, their out-of-control cystic acne devastated their career ambitions, their social lives, and their self-esteem.

The twins tried everything from costly facials to antibiotics. Faced with a decision about whether or not to start Accutane, a serious acne medication that requires monthly blood testing and comes with a long list of alarming side effects, they thought, “Wow, this is what we have to do to have clear skin? No. There’s got to be a different way to go.”

Although they were already eating a vegan diet, the twins looked to their plates for a solution. Read on for the key diet changes that restored their clear skin and confidence, and inspired them to write The Clear Skin Diet.

FOK: How did you make the connection between what you were eating and your acne?
Nina: We made the connection when we were looking at John McDougall’s website. It said that there are parts of the world where people don’t have acne, like in Papua New Guinea and Okinawa, where they eat a low-fat, minimally processed diet. So we said, “We’re going to try that!” And pretty much within three days, we still had some zits, but we noticed that they were smaller. And the inflammation was coming down. Our skin was so much less oily that we just knew, “Okay, we have to stick with this. It’s working.” It was that fast. Obviously, our skin wasn’t perfect overnight, but when your skin is so, so bad, you know when it’s getting worse and we just knew and could feel that it was getting better.

FOK: What specific foods are included in The Clear Skin Diet, and what’s off the menu?
Randa: The Clear Skin Diet is a low-fat, whole-food, plant-based diet. So basically you’re eating only plant foods and no animal products such as meat and dairy. You also can’t eat any high-fat plant foods like oil, soy milk, avocado, peanut butter, nuts, or vegan cheeses. And the center of the diet is starch-based.

FOK: What was your diet like when your acne was at its worst? What specific changes helped clear up your skin?
Randa: Before we came to our diet, we were already vegan, and we thought we ate a healthy diet. We definitely ate healthier compared to some of our friends and the average person. But we were eating lots of fat at the time. Well, I didn’t think it was a lot, but it adds up every day. So we were having soy milk in our oatmeal. We were having peanut butter. We would go out to restaurants sometimes when we were traveling, and there would be oil in the food. We were eating avocado, vegan chocolate, and sometimes we’d have vegan ice cream. But I think it was the soy milk that really did it for us; it’s just the fat. We would have had the same reaction to almond milk or coconut milk. Basically, it was the accumulation of foods like peanut butter, soy milk, and oil.
Nina: And hummus! The foundation of our diet was still rice, beans, potatoes—that was mainly what we were eating because that’s what our mom made—but we would have hummus, avocado, maybe have some vegan chocolate occasionally. And just having a little bit of that every day made such a difference with inflammation on our faces. ‘What is moderation?’ I thought, ‘I only have a little bit every day.’ But it really makes a difference in your skin.

FOK: What are the most important takeaways from the book for people who are struggling with acne?
Randa: I think the biggest takeaway from our book is that you can literally take control of your skin. It’s so empowering to know that you can take control. I just remember feeling free when I realized, ‘Wow, the power is in my hands.’ I know that my skin is going to be clear and I can literally control it myself and it’s one less worry. I don’t have to worry about my skin.
Nina: Also, if you really want to see results and clear your skin, I would say give it your all. What [else] do you have to lose except maybe some weight that you want to lose?

FOK: Any surprises in store for the reader?
Randa: I think it’s surprising to some people that it’s so easy to eat this way. Not only is it easy, but it tastes good and you’re satisfied. I have friends that might think, ‘Oh, that must be such a hard diet to follow.’ And then they come to my house and I feed them my food and they’re like, ‘Wow, I really like this food. I could do this.’ It’s easy, and it’s great and delicious.
Nina: Yeah, I think a big takeaway is that you’re just going to enjoy the food. When people go on diets and they have to restrict themselves, a lot of them are hungry. We never go hungry. We always feel satisfied. We look at food as our fuel. The most important thing is that we feel good. And when you feel good, you look good.

FOK: The Clear Skin Diet defines six key principles. Can you give us a run-through of those guidelines?
Randa: The guidelines are: 1. Plant foods only (no animal products). 2. Unrefined starches are going to be the center of your diet. 3. Avoid all oils. 4. Avoid high-fat plant foods like avocado, nuts, seeds, tofu, and soy. 5. Eat whole foods (that means food that is grown and minimally processed). 6. Just eat simply; It’s not important to get a ton of variety because when you’re eating healthy, you’re getting everything that you need.

FOK: Once you’ve adopted those guidelines, how long does it take to see results?
Nina: Some people experience results, like we did, in three days. And for some people, it takes two weeks. And then for other people, it can take longer, which is why we say in the book to give it at least six weeks. But it really just depends on the person. We tell people to remember that when people go on Accutane or [other] drugs like that, it can take three or four months to see results.

FOK: How strictly do you have to follow the diet for it to work?
Randa: The more you stick to the diet, the better the results you’re going to see. Some people don’t have to stick to the diet one hundred percent once they clear their acne. They can start to reintroduce foods and maybe see which foods lead to more acne. But we just encourage people to clear their acne, stop the breakouts, and then they can reintroduce foods.
Nina: When people stick to the diet one hundred percent and their skin clears up, and then they do reintroduce foods and they start breaking out, they’re like, ‘It’s totally not worth it.’ And most people are so satisfied with the foods they’re eating that they don’t even feel the need to add any other foods back in. I mean that’s the way we feel. We’re so happy with the results and the way we feel that we don’t miss any of those foods.

FOK: There are so many tasty-sounding recipes in the book. Do you have any favorites?
Randa: My favorite recipe is the Sweet Potato Pizza Crust with Roasted Veggies. It’s really fun to make and it’s so good and filling.
Nina: My favorite is the Lazy Lentil Loaf. It’s so filling and it’s kind of like sweet and savory. It’s amazing.

FOK: They sound really tasty. How did you go about developing the recipes?
Randa: Our mom helped come up with the recipes. They are family recipes, stuff that we learned over the years.
Nina: And things that most people like. Everybody loves pizza, everybody loves tacos, everybody likes brownies and mashed potatoes. So we kind of saw different foods that people like to eat and thought, “How can we make them healthy?” And it’s really not that hard to make them healthy and enjoyable. You feel good and you get clear skin. 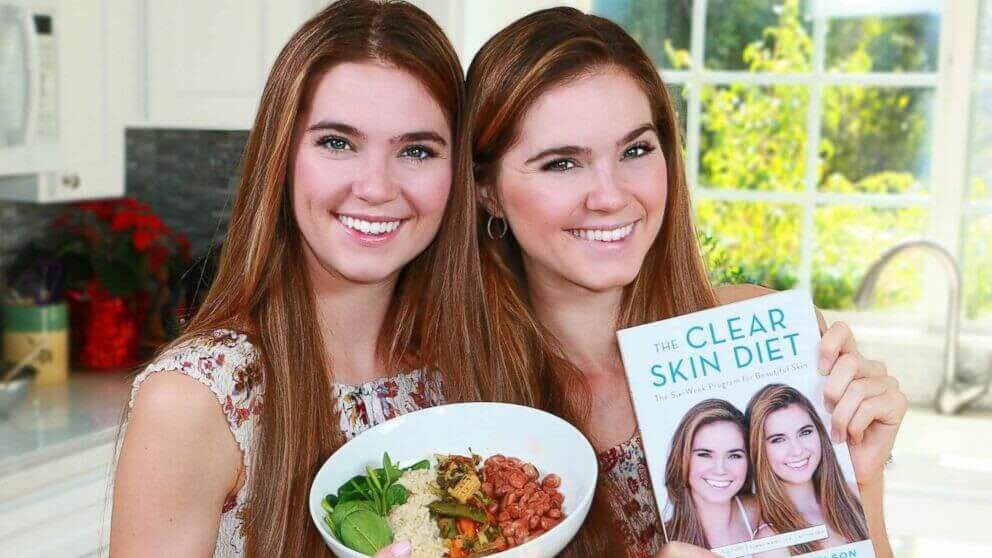 Jolia Sidona Allen is Forks Over Knives’ resident social media strategist. She is a longtime food and health writer and editor with a fierce passion for plant-based eating. Before coming to Forks Over Knives, she was the online managing editor of Vegetarian Times and a writer for POPSUGAR, Vegetarian Times, VegNews, Parachute Home, and other healthy lifestyle publications. Addicted to Facebook, farmers’ markets, and staying up on all the latest nutrition studies, Jolia spends her days spreading the word about healthy eating to as many people as she can reach.