How Does Following a Vegan Diet Help the Environment?

Adopting a whole-food, plant-based diet isn’t just good for your health: It’s also one of the best things you can do for the environment.

“When you make a choice between any two competing ingredients or meals, you’re making important choices that cascade through the global landscape,” says Gidon Eshel, PhD, a researcher who focuses on geophysics, climatology, and agricultural environmental efficiency at Bard College. From land use, to water supply, to greenhouse gas emissions, what you put on your plate has repercussions for the planet. Let’s compare the environmental impacts of meat and plant foods when it comes to each of these key issues. 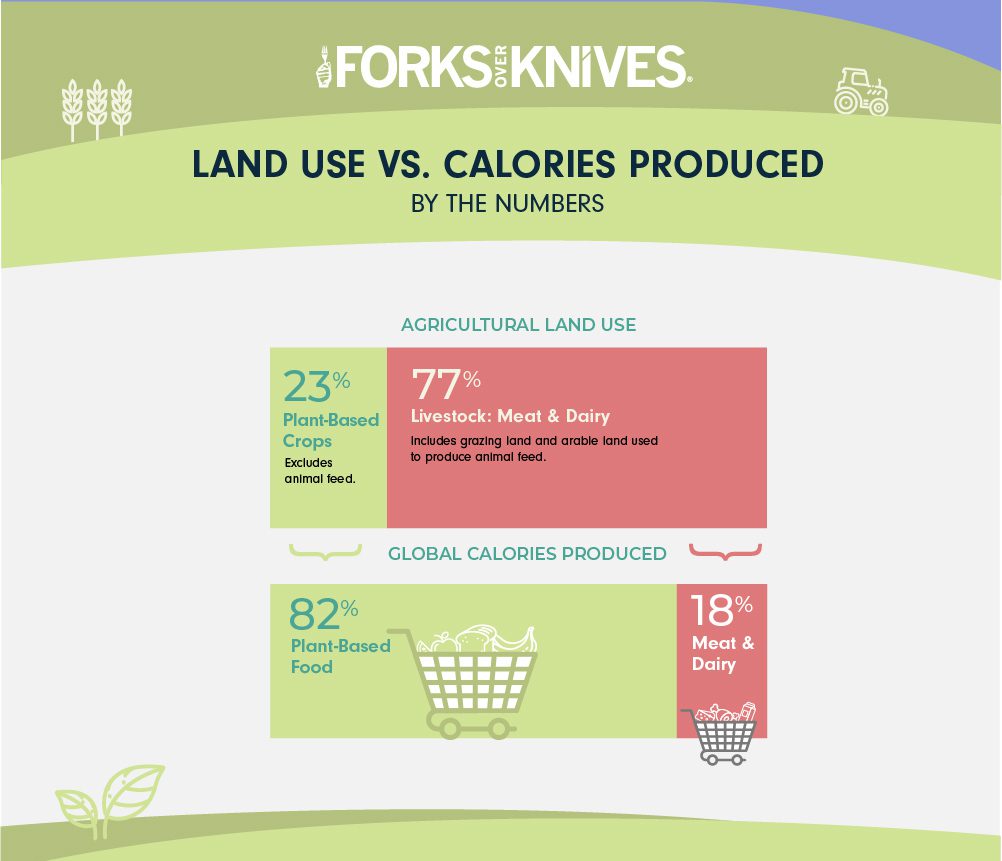 One of the most straightforward reasons that a plant-based diet is better for the environment is simply that it’s more efficient. Eating plants—instead of eating animals who eat plants—cuts out the enormous environmental burden that goes along with animal agriculture. Raising animals for food “introduces a major extra step of waste relative to the efficiency of us just eating the plant foods directly,” says David L. Katz, MD, MPH, FACPM, FACP, FACLM, co-author with Mark Bittman of How to Eat. “If you just eat the plants, you cut out the middleman.”

In the United States, 415 million acres, or 18 percent of all U.S. land, is dedicated as permanent pastures to raise livestock, according to research by Christopher Gardner, PhD, who studies human nutrition and food systems at Stanford University.

Livestock production is the single largest driver of habitat loss, according to research from Florida International University published in 2015 in the journal Science of the Total Environment. In the Amazon, where the rainforest plays an integral role in regulating the world’s oxygen and carbon cycles, cattle ranching accounts for 80 percent of deforestation rates.

In addition to the land needed for the animals themselves, there’s also the vast amount of land needed to produce crops to feed the animals. In fact, the majority of cropland in the United States is not used to produce food that people will eat but to produce crops that animals will eat. Between 2000 and 2010, 80 percent of the plant proteins produced in the United States were allocated to animal feed, either domestically or abroad. 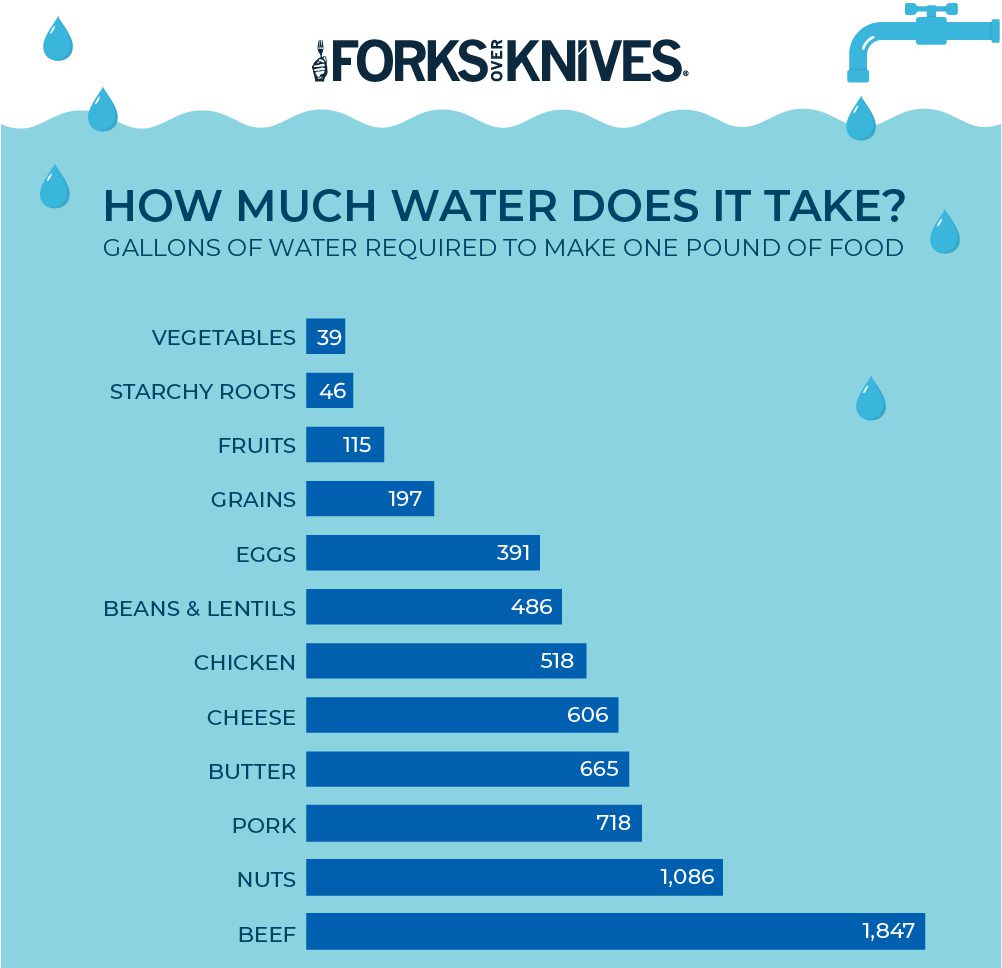 Lifting the Burden on the Water Supply

Water is one of the earth’s most precious resources, and tackling water scarcity begins with eating a plant-based diet.

There are a variety of reasons why plant-based foods are generally more water-efficient than animal foods. Nearly half of the water consumption in the United States goes toward raising livestock. Drinking water for the animals is only a small portion of the water used: It takes copious amounts of water to produce crops that will go into their feed. A pound of beef can take 1,800 to 4,000 gallons of water to produce. According to the Water Footprint Network, the average water footprint per gram of protein of beef is six times larger than for legumes.

Not only does animal agriculture require excessive amounts of water, it also interrupts our waterways. Grazing cattle accelerate soil erosion, choking off streams and wetlands. Excrement from industrial farmed animals can spill over and contaminate surrounding streams, rivers, lakes and ponds, making their way into the groundwater. “It’s a huge problem to manage the volume of waste produced at a factory farm,” says Katz.

Fertilizers, fuel, and pesticides used to farm crops for animal feed can also contaminate the water supply. When excess nitrogen runoff from fertilizers reaches waterways, it can stimulate the growth of algae. As the algae decomposes it depletes oxygen in the water, leading to dead zones and mass die-offs of marine life. 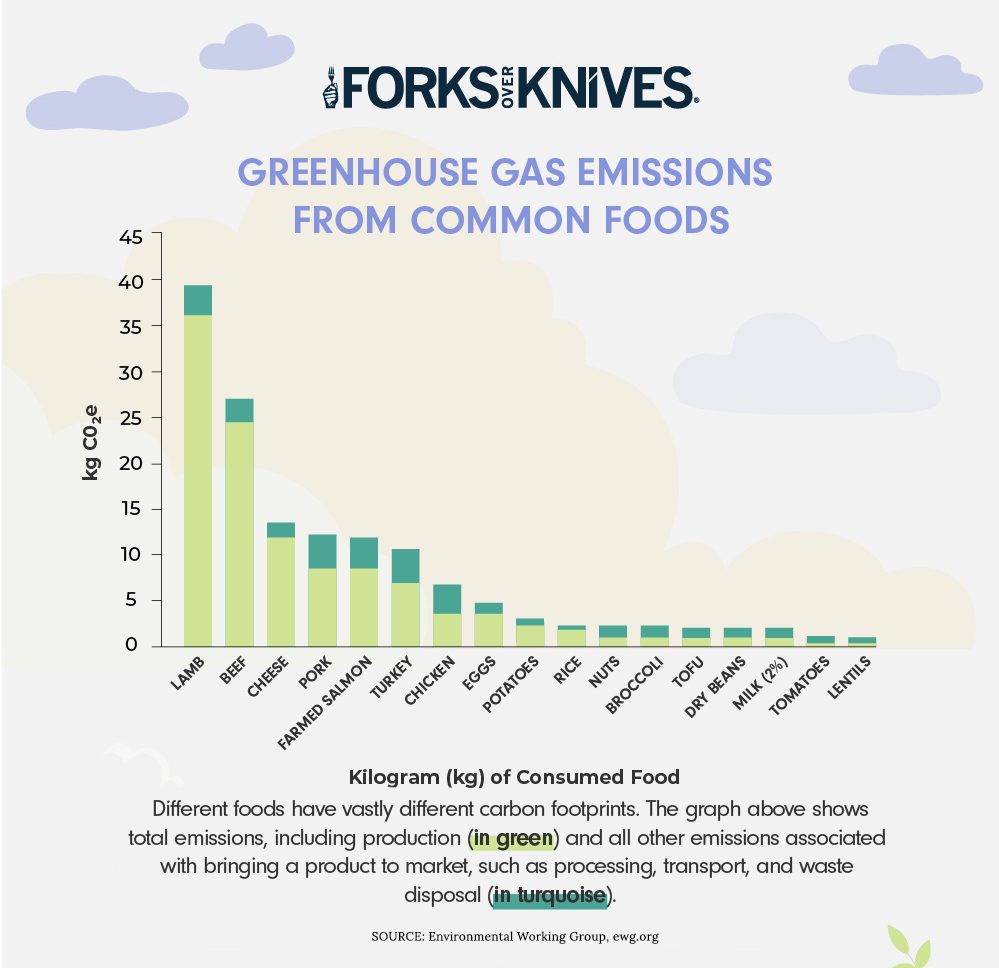 A 2017 study in the journal Climatic Change found that if every American substituted beans for beef, our country could achieve somewhere between 46 and 74 percent of the greenhouse gas reduction targets set in the Paris Agreement. “The ‘beans for beef’ scenario offers significant climate change mitigation,” wrote the study authors.

In animal agriculture, the biggest contributors of greenhouse gases are cows, responsible for 65 percent of the livestock sector’s emissions. The climate-altering carbon emissions associated with a single gram of protein from beef are at least 7.5 times higher than those associated with a gram of protein from plant sources, according to a 2019 review in the journal Nutrition Reviews.

Because cattle are ruminants, they ferment their food in a chamber of their stomach during digestion. The process produces methane, a greenhouse gas roughly 30 times more powerful than carbon dioxide. This methane then gets released into the air, along with nitrous oxide and carbon dioxide via cow belches and flatulence. These emissions absorb radiation from the sun and can trap heat in the atmosphere, contributing to climate change. Even stored manure releases methane.

Is Beef from Grass-Fed Cows Better for Environmental Sustainability?

Contrary to popular belief, purchasing meat from grass-fed cattle is not an eco-friendly choice. Clearing land for cattle ranching destroys natural ecosystems and biodiversity. Additionally, because cattle use energy to convert grass into protein, about 10 times the amount of land is needed to produce an equal amount of beef than needed to produce grain, according to the Yale School of Forestry and Environmental Studies’ Global Forest Atlas.

The commercial fishing industry is the single biggest contributor of plastic in our oceans, with discarded fishing nets alone making up roughly 46 percent of the infamous Great Pacific Garbage Patch.  The industry is also depleting our oceans of marine life, including mammals, killing more than 300,000 dolphins and whales annually as by catch. Learn more here: 5 Key Takeaways from the Viral New Netflix Documentary ‘Seaspiracy’.

Making Your Plant-Based Diet the Most Eco-Friendly

Living a plant-based lifestyle is a win for environmental sustainability. To make an even bigger impact, choose whole, unprocessed foods that are sourced locally when local conditions permit. Shop for seasonal produce in biodegradable, compostable packaging—or better yet, no packaging at all. And aim to reduce food waste by shopping strategically and using what you have.

Dana Hudepohl is an Atlanta-based writer specializing in health. Her work has appeared in more than 40 national magazines, newspapers, and websites including O, the Oprah Magazine; Shape; Health; and The Wall Street Journal. A graduate of Stanford University, she enjoys listening to health podcasts while cooking plant-based meals for her family of four. Find her on LinkedIn.