Freshwater Abuse and Loss: Where Is It All Going?

Along with climate change, perhaps the most pressing concern we have regarding sustaining our lives, and future life on earth, is our supply of fresh water. From 1941 to 2011 the world’s population has tripled, but freshwater consumption has quadrupled, which is predicted to leave forty percent of the world’s population facing severe water stress by the year 2020. One third of all counties in the lower United States (1,100 counties spanning fourteen states) will face water shortages by 2050, with more than 400 of them at “extremely high risk.”

While many scientists and organizations are concerned about water scarcity, the matter is really one of water management. Although important, the obvious individual acts of everyday water consumption are not where we need to focus (flushing toilets, taking showers, doing laundry, etc.) Instead, we most need to recognize and manage the water-intensive practices that remain obscured by various motives. For instance, nearly half of U.S. annual water consumption goes toward raising livestock, while less than one percent is used for human drinking purposes.

Fresh water constitutes just 2.5% of all water on earth, and in many ways it is not fully renewable in our lifetime, nor infinite in quantity. Many aquifers are being drawn down at rates as high as 250 times their ability to recharge. Deep groundwater aquifers that took tens of thousands of years to form are rapidly being drained in many areas of the world, such as the North China Plain, the Ogallala in the High Plains of the U.S., the Columbia River Basin in Washington state, and California’s San Joaquin Valley. As much as 75% of the water withdrawals in these areas are given to livestock. The 12-million-year-old Ogallala Aquifer, which has supported the life of more than 50% of our cattle industry since the mid 1940s, is predicted to run completely dry within the next twenty years.

In many areas of the world, freshwater scarcity coexists with hunger, poverty, and inefficient use of marginal natural resources. Soon countries downstream will be battling those upstream for freshwater supplies. Pakistan, Afghanistan, and Saudi Arabia are raising livestock and crops to feed them while running their water supplies dry. Sixty percent of Ethiopia’s population suffers from hunger and thirst, and yet their parched land is being used to support a growing herd of over 50 million cattle.

Worldwide, we raise and kill 70 billion animals for food each year, all of whom require water. A few billion of these animals need forty or more gallons per day—that’s over 100 times what we as individuals need to consume daily. While agricultural irrigation is responsible for the majority of global freshwater use (between 70 and 93%), the largest concern is irrigation of crops, alfalfa, and pastures used to feed livestock. The livestock industry also uses fresh water for the animals to drink, for cleaning equipment and holding areas, for slaughtering, and for processing the dead animals. The meat and dairy industries combine to account for 29% of all the fresh water used in the world today.

Many of the commercial vegetable and fruit farms I’ve interviewed grow their products without any irrigation, yielding 2,000 to 20,000 pounds of annual produce per acre, grown simply with rainwater.

According to the EPA, the average household of three in the U.S. consumes 50,000 gallons of water per year for indoor use. However, this estimate does not include the water required to bring food to our table, which is by far the most important factor in our water consumption. Consider that the average American consumes 206 pounds of meat each year (46 pounds of pig, 58 pounds of cow, and 102 pounds of chicken and turkey), as well as 248 eggs and 616 pounds of dairy products. This equates to 405,000 gallons of water per person per year, consumed just to support that animal-based diet. A more accurate view is that every U.S. household of just three people uses well over a million gallons of water each year, not 50,000. And 96% of that outrageous water use results directly from the choice to eat animals.

Our current mindset regarding global freshwater usage is business as usual, and it is demand based—meaning any increase in perceived need resulting from predicted water shortages is met simply by finding solutions to extract more water (e.g., desalination, digging deeper wells, devising water-diversion schemes, or “borrowing” from nearby surface water). Instead, we need to understand that this vital natural resource is not “free” and then establish economic incentives to minimize overconsumption.

The long-term solution to our looming freshwater crises can be found on our plates. Why wait until we run out of water? Make the change to a water-smart, purely plant-based diet today—and then inspire others to do the same! 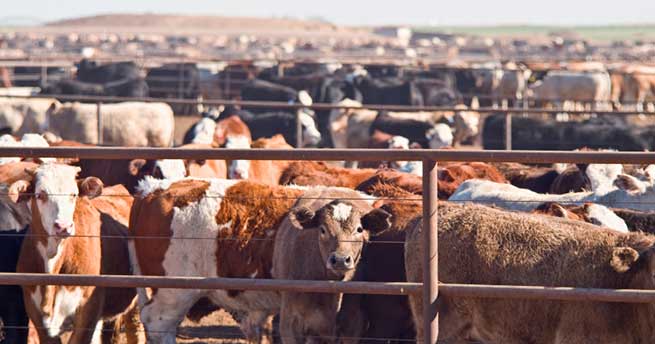 Huge New Study Finds Healthy Foods Are Better for the Environment
Aug 24, 2022
Which Nondairy Milk Is Best for the Environment? The Answer Might Surprise You
Jun 29, 2022
Catering Giant Pushes Toward 42% Plant-Based Meals on U.S. College Campuses
May 4, 2022