No, Grass-Fed Beef is Not Better for the Planet

Bill Ripple, PhD, distinguished professor of ecology and well-known researcher at Oregon State University, has spent over 20 years researching the roles of large carnivores in ecological systems around the world. He began his work researching the beneficial effects that wolves in Yellowstone have on that ecosystem. I talked to him about his critical research and how his work demolishes the belief that grass-fed beef is good for our planet.

Wild carnivores are regularly exterminated to protect livestock. But Ripple discovered that the surrounding ecosystems suffer when this happens. Humans, who eat meat but are biologically designed to eat a more plant-based diet, are killing the predators whose role in a balanced ecosystem is precisely to eat meat. Why? So that humans can consume the prey of true carnivores.

Ripple is one of 43 conservation scientists and ecologists from around the world who made headlines last July when they published a report titled “Saving the world’s terrestrial megafauna” in the journal BioScience. They appealed to the scientific community and to governments around the world to prevent the imminent extinction of large carnivores and herbivores.

In his work, Ripple studied the impact of ruminants, especially cattle, on greenhouse gases. Ruminants are animals that ferment their plant-based food in a special stomach during digestion. During this process, ruminants emit methane, a far more potent greenhouse gas than carbon dioxide. Ripple reached the following disturbing realization: “In our research, we found that even with dramatic reductions in carbon dioxide emissions, we can’t meet our climate goals. We need to quickly and drastically reduce other greenhouse gases, especially methane.”

He added, “Comparing greenhouse gas impacts per pound of product produced, grass-fed beef has the strongest food-related impact, followed by sheep (another ruminant), cattle that are grass-fed part of the year and on a feedlot in winter, and finally cattle that are kept on a feedlot all year. So the popular idea that grass-fed beef does less environmental damage than feedlot beef is actually the reverse of the facts.”

Beyond methane, Ripple and his colleagues studied what would happen to a severely degraded ecosystem when grazing cattle were removed. The profound effect on the surrounding wildlife and vegetation is strikingly visible (photos below) from the research they did at Hart Mountain, a national pronghorn antelope refuge in southeastern Oregon.

According to the U.S. Fish and Wildlife Service’s description of Hart Mountain: “The 278,000-acre refuge is one of the most expansive wildlife habitats in the arid West free of domestic livestock.” This was not always true, as “grass-fed cattle” dominated and degraded the reserve for decades. In 1990, the U.S. Fish and Wildlife Service banished grazing cattle to try to restore the ecosystem and allow more resources for pronghorn antelope and other animals whose numbers in the wild were precarious.

The results are astonishing and delightful. The shrubs and trees key to the ecosystem, such as willow and aspen, started growing back, and stream banks were restored when cattle stopped trampling them and eating down the plants. Wildlife numbers rebounded as their habitat healed itself. This transformation is documented by numerous before-and-after pictures that show a wounded environment at the time when cattle reigned, and green flourishing young trees, shrubs, and grass without livestock present. The destructiveness of so-called “grass-fed beef” is undeniable in these before-and-after photos. 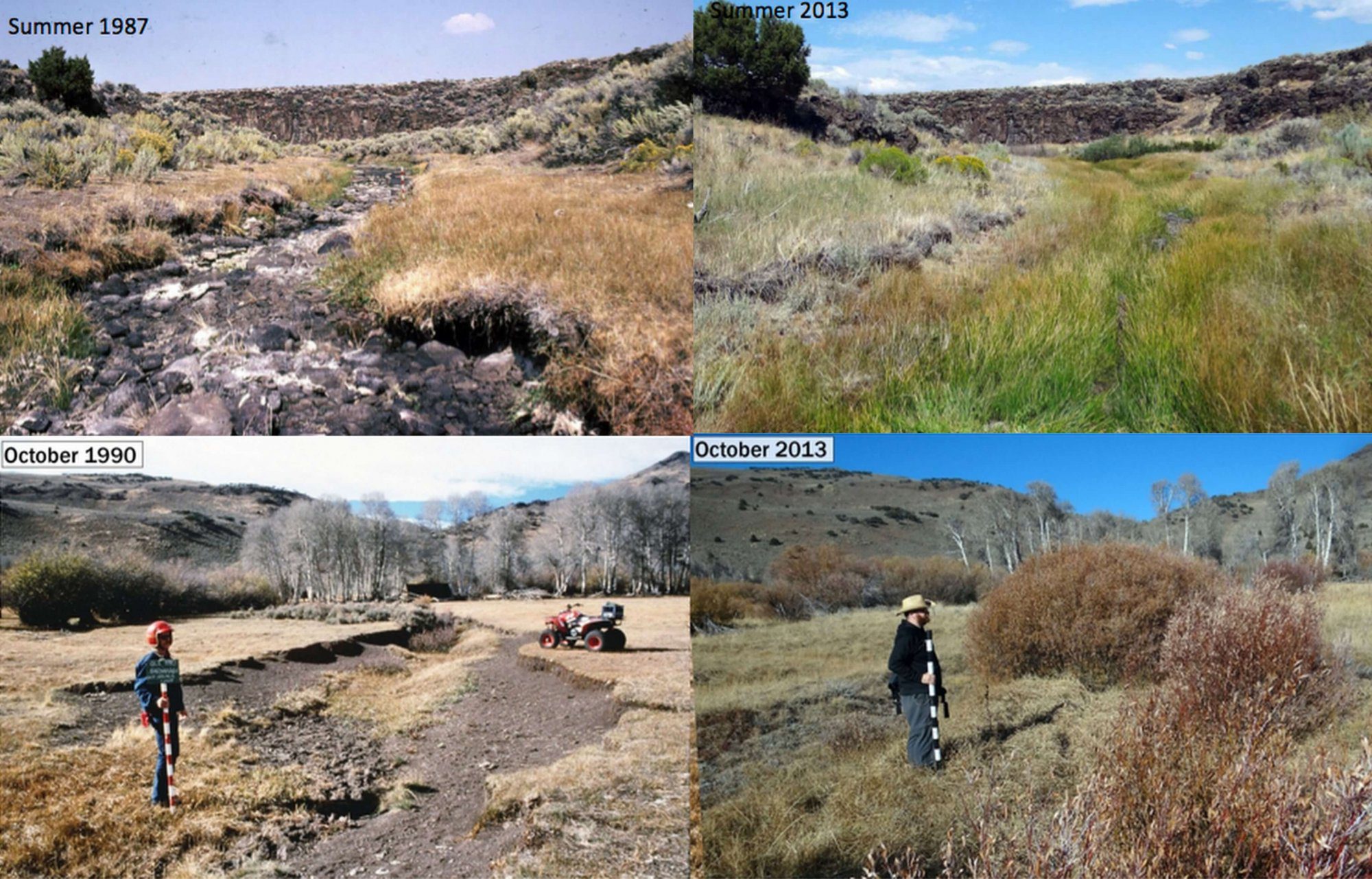 Ripple is fascinated by the parallels between environmental and human health recovery. “When you stop eating animal products, studies show your arteries can reopen and health problems vanish with the blockages. Just as we saw at Hart Mountain—get rid of the cattle, and streams will be beautifully restored in the landscape.”

Watch the video below for a full presentation by Dr. Ripple on the Rewilding of Hart Mountain.

Can’t Cut Meat 100 Percent Yet? “The Reducetarian Solution” Says Less Is Next Best
April 17, 2017
The Best Thing You Can Do for the Planet Has Nothing to Do With Shorter Showers or Hybrid Cars
May 5, 2016
7 Things That Happen When You Stop Eating Meat
January 12, 2016

The Rewilding of Hart Mountain After Livestock Removal