When Sheil Shukla, DO, went vegan on New Year’s Eve in 2014, it wasn’t love at first bite. “I tried making a mac and cheese without dairy, and I hated it,” he says with a laugh. But convinced that it was the best choice for his health, the environment, and the animals, he stuck with the new diet, coming up with his own recipes and sharing them on Instagram, where he developed a steady following. Throughout medical school, as he attended nutrition conferences and learned more about the connections between diet and disease, his passion for plant-based cooking only grew stronger. Now, less than a month after completing his residency and beginning his practice as a physician, Shukla is releasing his debut cookbook. Plant-Based India: Nourishing Recipes Rooted in Tradition features more than 100 vibrantly photographed vegan recipes that center on whole plant foods and can be adapted for oil-free eaters. Recently, Shukla spoke with us from his home in Illinois about the new cookbook, his culinary influences, and the art of practicing medicine.

What style of cuisine is represented in Plant-Based India?

SS: Gujarati cuisine is relatively minimalistic [compared with] Indian cuisine in general. A classic Gujarati meal is a thali or a plate, and that has different components. No. 1 is usually a vegetable dish, whatever vegetable is in season—ivy gourd, cauliflower and peas, or really any vegetable at all. Another component would be a legume dish, usually a dal, which is a savory stew. Another would be some sort of grain; traditionally that would be rice, but quinoa is another grain option. And then typically roti, a whole grain flatbread.

You dedicated this book to your grandmother, who lived with you and your parents in Wisconsin for a time before returning to India. What’s a lesson that she imparted on you in the kitchen?

SS: One of the biggest things that I learned from her is taking advantage of seasonal produce. In one of the recipes, I talk about how we had this elderly handyman who came around to our home to help out with things, and he had a garden in his backyard. So he would bring us boxes of fresh bell peppers, fresh tomatoes, zucchini—plenty of fresh produce. And my grandmother would use all of that produce and make the freshest meals. She would really take advantage of whatever was in season, whatever was available to her. Even if it wasn’t traditionally used in Indian cuisine, she would find a way to incorporate it into the food that we were eating.

You note that a passion for both science and the fine arts led you to become a doctor. What connections do you see between those fields?

SS: I see medicine as even more of an art than a science. Talking to patients, counseling patients, coming up with diagnoses and plans—the finesse that it takes comes with experience and through training and years of practice. Of course, there’s a scientific background, as well, to medicine and the research behind the decisions that we make. It was really the combination of the two that drew me toward medicine as opposed to purely lab-based, more research-based careers or to art alone.

You write in the book that you’re unapologetic about calling for a lot of different spices in your recipes. Tell us more about that.

SS: Spices are really the hero of Indian cuisine. And for plant-based cooking, spices are a way to really elevate the flavor of dishes. They have nutritional benefits, as well, with a lot of spices being anti-inflammatory. And these days it’s just so easy to find spices too, like at your local grocery store or even online. It’s just so accessible. So I had a hard time finding a reason not to include many spices.

Which spice blends do you always keep on hand?

SS: Garam masala is one of the most important ones. Another important blend that is not as widely recognized is sambar podi, or sambar masala. Some of the key flavors are coriander, cumin, fenugreek seeds, as well as urad dal, which is black lentil with the skin removed. Lentils are often used in stews and that sort of thing, but the lentil in this purpose is used to create a nutty flavor in the spice blend. So it’s really unique to see it not used as a stew, but rather as a flavor component.

Can the recipes in this cookbook be adjusted for a whole-food, plant-based diet?

SS: I do use a sprinkling of salt, oil, and sugar throughout the book, not only because those ingredients are traditionally used [in Indian cooking] but also because it’s reflective of how I cook and eat, and I think it would be disingenuous to have a strictly SOS-free book when that’s not necessarily how I cook for myself and for my family. But there’s absolutely huge merit to eating a strictly oil-free diet, especially for people with chronic illnesses like heart disease. So I think of the book as catering to people who are transitioning from a traditional [American] diet to one that’s fully SOS-free. Pretty much every single recipe can be made without salt, oil, or sugar. Obviously for salt, you just omit it. For oil, there are two different techniques that can be used: For stir-frying, just use vegetable broth or water instead of oil. When I call for frying spices in a small amount of oil to develop their flavors (a technique called vaghār), you can just toast the spices in a dry pan. And instead of using sugar, which I don’t really call for much at all anyway, you can use date paste. 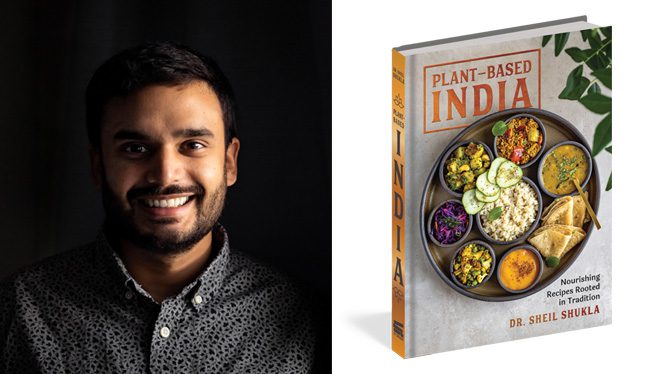