From Prediabetic, Asthmatic, and Anemic to Positively Thriving on a Plant-Based Diet

For decades, I struggled with a range of health issues. In middle school, I was diagnosed with asthma. At college, where I lived on fast food, I developed anemia and gained excess weight. Migraines entered the picture in 2011, when I started my career as a nurse in an emergency room.

Then, while on my honeymoon in 2013, I started to experience severe stomach pains and bloating after every meal. I went to multiple doctors, and they couldn’t find anything wrong with my stomach. Eventually, I was diagnosed with irritable bowel syndrome and leaky gut syndrome. I was given medication, but it only seemed to worsen my symptoms.

In 2015 I decided to try switching up my diet to see if that might help. I adopted a high-fat, low-carb diet that consisted of meat and vegetables, along with lots of oil and other fatty foods. I completely eliminated dairy, grains, and beans, and I ate very little fruit. I found some relief, but I was still having stomach issues and suffering from asthma and migraines.

While on vacation in September 2018, I was scrolling through Netflix and came across the Forks Over Knives film and decided to see what it was about. When I was done with the film I was curious about trying the diet, but I was skeptical. At that point I’d been avoiding grains and legumes for years because I’d been told that they could worsen my stomach symptoms. I couldn’t see how I could eat those things and get better.

Around the same time, I started experiencing unexplained chest pains and weight gain. Again, I went to see a specialist and they couldn’t determine the problem. They said that my blood pressure was perfect; my labs were fine; and my heart looked good. The only thing they could think to tell me was that I was obese and needed to lose weight. Eventually, I talked to a nurse practitioner who told me that my gallbladder could be causing chest pain. I went for a HIDA scan (an imaging test used to examine the liver, gallbladder, and small intestine), and sure enough the chest pain was caused by my gallbladder, which was functioning at less than 5 percent.

On top of that, I was so tired all the time. As a registered nurse, I work 10- to 12-hour shifts, and I never felt like I had enough energy. I couldn’t believe I felt so bad at just 35 years old.

In 2019, I found a great doctor who ran some more lab work for me. Two things stuck out: My A1C (a measure of average blood sugar) was 6.0, putting me in the prediabetic category. My C-reactive protein level—which measures inflammation and should generally be under 3—was 8.4. I was stunned. I had not had a grain or fruit in years, and yet my A1C was high; I was prediabetic and overweight; and my entire body was inflamed.

She then tested me for small intestinal bacterial overgrowth (SIBO) and found that I had hydrogen sulfide SIBO and that meat and other foods were causing me to have a reaction. That was the final thing that convinced me to go whole-food, plant-based.

In November 2019, I went in 100 percent to the whole-food, plant-based way of eating. I found some plant-based YouTubers, such as Brittany Jaroudi, who talked about their journeys, and that gave me a lot of inspiration. I also had a chance to meet Michael Greger, MD, in person and listen to his seminar, and that really helped solidify that WFPB was the right path for me. I downloaded the Forks Over Knives Recipe App and signed up for Forks Meal Planner, and I picked up the magazine. I also bought the How Not to Die Cookbook. As I became more confident in my plant-based cooking, I started creating my own meal plans.

The thing that surprised me the most was the diversity of food available to me. Even though I was not eating meat, processed foods, oil, or dairy, I still had so many options. For the first time, eating became exciting to me, and I found a love for cooking that I never knew I had. I started to enjoy coming up with new dishes.

And I began to see the health benefits. I had more energy. My mood got better. My asthma symptoms decreased. About six months in, I discovered that I had some food intolerances due to leaky gut, but I made the necessary adjustments and stuck with the WFPB way of eating.

Thriving Through and Through

More than a year later, I continue to see the benefits of this lifestyle change. Today I hardly ever need to use my inhaler. My labs have shown significant improvement, with my A1C dropping from 6.0 to 5.3 and my C-reactive protein dropping from 8.4 to 3, putting me in the normal range for both. And my iron doubled! I’ve lost more than 50 pounds, and I continue to lose weight just by eating the foods I love. For the first time in a long time, I’ve had the energy to actually want to exercise.

My favorite thing to eat now is beans. I love making soups loaded with beans and veggies; they are convenient for lunch during my long, busy workdays. The No-Tuna Salad Sandwich is another go-to meal for me.

When the people in my life saw the weight dropping off me, they asked me about it, so I’ve been able to share my story many times. Three of my co-workers have now switched to the WFPB diet, and some friends and family members have started trying to eat more this way, too. I hold information sessions over Zoom to help them understand what WFPB is and how to make the transition. I can’t remember ever feeling as good as I do today. 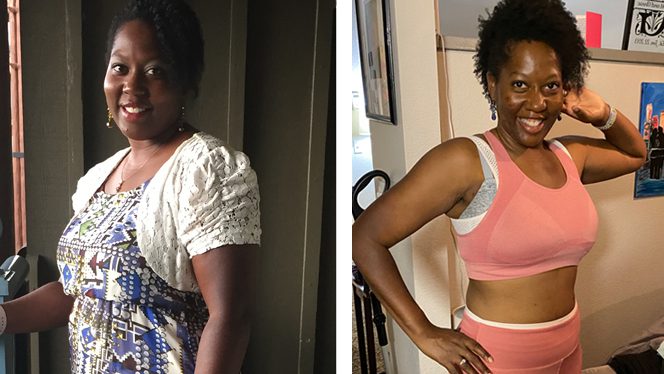 A Carb-Centric Diet Helped Me Recover from Type 2 Diabetes
Jun 22, 2021
Meal Prepping: 6 Reasons It’s Worth the Hype
Apr 15, 2021
A Plant-Based Diet Freed Me After Decades of Digestive Distress and Gastrointestinal Issues
Apr 1, 2021