It’s expected that by the year 2030, there will be 21.7 million cases of cancer around the world, up from 14.1 million cases in 2012, according to the World Cancer Research Fund. The American Cancer Society estimates that 1 in 2 men and 1 in 3 women will develop cancer in their lifetime. An estimated 40 percent of cancers are preventable, and diet can impact cancer risk in several ways. In this article, we’ll review the scientific research on the connections between diet and cancer. 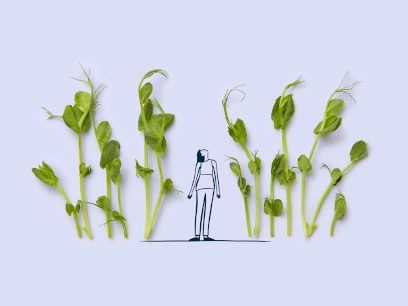 New human cells are routinely formed as healthy cells grow and divide. It is normal for old, damaged, or abnormal cells to die, making room for these new cells. When suboptimal cells continue to replicate instead of dying out, they force out healthy cells. The spread of the unhealthy cells can lead to cancer.

Causes of cancer include environmental factors, lifestyle behaviors, and genetics. Fewer than 10 percent of cancer cases are caused directly by gene defects (or mutations) passed on by parents. People who do inherit such genetic mutations can take steps to reduce their risk of developing cancer. “Time and time again, studies have shown that even if you have inherited some genes that put you at increased risk of cancer, adopting a healthy lifestyle can significantly reduce that risk,” says Shireen Kassam, MBBS, PhD, a visiting professor in plant-based nutrition at the University of Winchester in England, who gave a presentation about plant-based diets and cancer at the 2020 Plant-Based Nutrition Healthcare Conference.

An estimated 42 percent of cancer cases in the United States are lifestyle-related. Cigarette-smoking alone accounts for 19 percent of all cancer cases, but it’s by no means the only lifestyle factor to play a significant role in cancer risk. According to the 2020 American Cancer Society Guideline for Diet and Physical Activity for Cancer Prevention, more than 1 in 6 cancer cases in the United States are related to excess body weight, physical inactivity, alcohol consumption, and/or poor nutrition. But a 2019 survey by the American Institute for Cancer Research found that less than 50 percent of Americans recognize that exercise, alcohol consumption, and certain dietary habits have a clear link to cancer development.

How I Went from Cancer Patient to Ironman Triathlete

The following foods and beverages have been linked to a heightened risk of cancer.

After a Cancer Diagnosis, Our Family Went Plant-Based and Lost Over 300 Pounds

CAN OVERCOOKED FOOD CAUSE CANCER?

Cooking beef, pork, poultry, and fish at high temperatures, whether frying, broiling, or grilling, creates chemicals called heterocyclic amines (HCAs), which may increase the risk of certain cancers such as colorectal, breast, prostate, kidney, and pancreatic. Other chemicals called polycyclic aromatic hydrocarbons (PAHs) are produced during smoking or grilling, when fats and juices drip into the flame; the smoke can act as a vehicle to adhere the chemicals to the food. Interestingly, grilling vegetables, tofu, and plant-based meat substitutes does not carry the same risk for forming HCAs and PAHs, according to the Dana-Farber Cancer Institute.

Frying or burning starchy foods or grains, such as toast, cookies, and potatoes, produces a chemical called acrylamide. While high levels of acrylamide in food have been found to increase the risk of cancer in some animals, a study by the World Cancer Research Fund found there is no strong evidence of a link between eating overcooked starchy food and increased cancer risk in humans.

Still, if you would like to reduce your exposure to acrylamide, the U.S. Food and Drug Administration recommends the following:

After a Cancer Diagnosis, I Went Plant-Based and Transformed My Health

All cells, including cancer cells, use glucose (the most basic form of sugar) for fuel, which has led some to wonder whether it’s possible to “starve” cancer cells by completely eliminating sugar from one’s diet. However, as the Dana-Farber Cancer Institute notes, “all of our healthy cells need glucose to function, and there is no way for our bodies to let healthy cells have the glucose they need, but not give it to the cancer cells.” Glucose is so fundamental to human metabolic processes that when we don’t get enough of it, our bodies will synthesize glucose from protein and fat.

When it comes to sugar and cancer risk, the key factor is the form in which the sugar is consumed: as it naturally occurs in whole foods; or refined and stripped of all other nutrients.

Refined sugar intake may increase cancer risk by several mechanisms. As discussed in the section above, eating a lot of refined sugars and highly processed foods often leads to weight gain, and excess body fat significantly increases the risk of many types of cancer. Additionally, eating refined sugar can cause insulin spikes, which may increase IGF-1 levels and heighten cancer risk. In the case of esophageal cancer, refined sugar may have a more direct impact: A 2017 clinical study found that even when controlling for BMI, subjects who ate more refined, added sugars were more likely to develop Barrett’s esophagus, a precondition for esophageal cancer.

But across the board, these negative outcomes are seen only with refined, added sugars. Eating fruits, veggies, and whole grains—which contain naturally occurring sugar, packaged with fiber and other vital nutrients—has not been shown to increase cancer risk (and as we’ll discuss in the next sections, a diet rich in these whole plant foods can help reduce one’s risk of developing and dying from certain cancers).

A WFPB Diet Helped Send My Prostate Cancer Into Remission

Based on robust research, eating a plant-predominant diet rich in fruits, vegetables, whole grains, and beans may be one of the most powerful tools in cancer prevention. “Each of these food groups have been associated with a significantly lower risk of cancer due to the high-fiber content and high levels of antioxidants and anti-inflammatory compounds,” says Kassam. Plant-based diets help improve several risk factors that, left unchecked, promote the development of cancer: insulin resistance, hormone/growth factor dysregulation, oxidative stress, inflammation, carcinogen exposure, and an unhealthy gut microbiome.

“When we consume fiber-rich foods such as fruits, vegetables, whole grains, seeds, nuts, and legumes, we empower our gut microbes to produce short-chain fatty acids like butyrate that are anti-inflammatory and have been shown to inhibit colon cancer development,” says Bulsiewicz.

A large study in the International Journal of Cancer found that those who ate the most plant foods and least animal foods reduced their risk of cancer by 15 percent. A large Harvard study followed men and women for 34 years and measured whether they adhered to five low-risk lifestyle-related factors: never smoking; maintaining a healthy weight; regularly exercising; consuming alcohol only in moderation; and eating a healthy diet high in vegetables, fruits, whole grains, unsaturated fats, and omega-3 fats and low in red and processed meats, trans fats, and sugar-sweetened beverages. They found that just following a healthy diet reduced the risk of dying from cancer by 30 percent; adhering to all five healthy lifestyle factors reduced the risk of  dying from cancer by 65 percent.

DOES A PLANT-BASED DIET MAKE A DIFFERENCE IF YOU ALREADY HAVE CANCER?

Studies have found that eating a low-fat diet rich in vegetables and whole grains can help improve survival rates for cancer patients. In a study of 1,575 people with nonmetastatic colorectal cancer, for every 5 grams of increased daily fiber consumption, there was an 18 percent lower risk of death from colorectal cancer. (Plant foods are the only source of fiber; animal products contain no fiber.) In a study looking at diet and breast cancer mortality, women who increased their intake of fruits, vegetables, and whole grains lived longer.

One area of ongoing research is whether certain plant foods can suppress angiogenesis—the process by which our bodies create new blood vessels, which cancer cells can use to grow and spread.