Vitamin B12: All Your Questions Answered

Vegans are regularly advised to mind their levels of vitamin B12, but vegetarians and even meat eaters often come up short on this important nutrient, which helps keep nerves and blood cells healthy. In this informative Q&A—and in the video below—Dr. Sofia Pineda Ochoa goes deep on where vitamin B12 comes from, why we need it, and how to ensure we’re getting enough.

Vitamin B12 is a water-soluble vitamin that is important for the maintenance of the nervous system and in the formation of red blood cells.

Where does B12 come from?

Vitamin B12 is produced by bacteria, not animals or plants. As such, animals, including humans, must obtain it directly or indirectly from bacteria. It can be found in bacteria-laden manure and unsanitized water, though we obviously should not be consuming either of those things. It can also be found in the human intestinal tract, but it’s not clear whether sufficient amounts are made and absorbed there to meet our nutritional needs.

Many animal foods contain high amounts of vitamin B12 because they accumulate this bacterial product during their lives, and livestock are often supplemented with vitamin B12 in their feed. These animals are also exposed to manure in their living conditions, with some even being fed manure. (For example, cows are sometimes fed poultry waste.) In fact, the FDA has reported that most meats are contaminated with fecal bacteria.

In the past, vitamin B12 from bacteria was also naturally and more reliably present in plant foods. Today, however, with modern hygienic practices more effectively cleaning and sanitizing produce, along with soil being exposed to more antibiotics and pesticides, most plant foods are no longer reliable sources of this bacterial product.

Interestingly, some plant foods still contain some vitamin B12, including certain mushrooms and seaweed. And, many plant-based food products, such as cereals, non-dairy milks, and nutritional yeast, are now fortified with a crystalline form of vitamin B12, making them good sources of vitamin B12.

The crystalline form of vitamin B12, which is the form used in fortified foods and supplements, is actually preferable to the protein-bound form present in animal foods because it’s generally easier for our bodies to absorb.

Who is at risk for B12 deficiency?

Another review found that 40 percent of patients in the U.S. had unexplained low vitamin B12 levels. Researchers attributed this shortfall to “food cobalamin malabsorption,” meaning the vitamin B12 that is naturally present in foods is simply not absorbed. Luckily, research has shown that these people are still able to absorb the crystalline form found in supplements and B12-fortified foods.

The absorption process for vitamin B12 is actually quite complex, requiring several physiologic elements to take place for it to occur adequately, and many factors can contribute to deficiencies. For example, long-term use of antacids, H. pylori infection, alcohol abuse, smoking, atrophic gastritis, and conditions that slow the movement of food through the gastrointestinal tract (such as diabetes, scleroderma, strictures, diverticula), are all associated with vitamin B12 deficiencies.

So, while people who abstain from eating animal foods can have lower levels of vitamin B12, it’s important to note that vitamin B12 deficiencies are not uncommon in the general population, even among those eating large amounts of animal foods.

What are the best sources for B12?

Are animal foods a good source of vitamin B12?

While animal foods contain high amounts of protein-bound vitamin B12, they are not an ideal source for vitamin B12 for two main reasons:

First, the protein-bound B12 in animal foods can be difficult for some people to absorb, particularly those who don’t have appropriate amounts of gastric acid to cleave the protein from the vitamin.

Second, animal foods are not the best source because consuming them increases our levels of IGF-1 (a hormone consistently associated with increased cancer risk and tumor growth), TMAO (a substance that injures the lining of our blood vessels and promotes the formation of cholesterol plaques), as well as other unhealthy substances such as heme iron, which is associated with oxidative stress and the formation of free radicals.

In fact, the recent past president of the American College of Cardiology, Dr. Kim Williams, stated during his tenure that the extensive medical evidence linking TMAO to cardiovascular disease was, in his opinion, sufficient reason for people to avoid consuming all animal foods (even without considering all of the other highly problematic health issues associated with meat, dairy, and eggs).

What are the symptoms of B12 deficiency?

Symptoms of vitamin B12 deficiency are fairly non-specific, and can include fatigue, weakness, lightheadedness, and loss of appetite. Shortness of breath, numbness, and memory problems can also occur. The wide-ranging and imprecise nature of these symptoms underscores the importance of being proactive in avoiding this vitamin deficiency.

What happens if B12 deficiency is overlooked or ignored?

Because vitamin B12 helps in the formation of nucleotides (genetic material), a deficiency can impair our normal production of DNA. This can first manifest as difficulty with the normal production of red blood cells, and can result in anemia. It can also result in problems with the maintenance of the nervous system, causing a wide variety of neuropsychiatric symptoms.

Who should take a B12 supplement or get tested?

Given the prevalence of deficiencies in the general population, regardless of one’s diet, everyone should monitor their vitamin B12 status or take a supplement (or both). This is a deficiency that’s usually easy for a medical professional to identify and treat.

For most healthy people with no known deficiency, a blood test including vitamin B12 levels at your annual physical is normally appropriate. Keep in mind that vitamin B12 can be stored in the liver for a few years and keep our blood levels high, even if we are no longer absorbing or consuming enough of it.

Additional tests available to further evaluate and diagnose a suspected B12 deficiency include methyl malonic acid and homocysteine levels (both of which are usually elevated when there is a B12 deficiency).

So, what’s the bottom line when it comes to B12?

Vitamin B12 is an important and necessary nutrient. However, animal foods are not the best source due to the health issues noted above. Everyone (regardless of their diet) should monitor their B12 levels and ensure they have a reliable source by taking a vitamin supplement or eating B12-fortified plant foods (or both). In the end, avoiding vitamin B12 deficiencies is easy and inexpensive, but it is something we should be mindful of.

Learn more about whole-food, plant-based nutrition on our FAQ page. 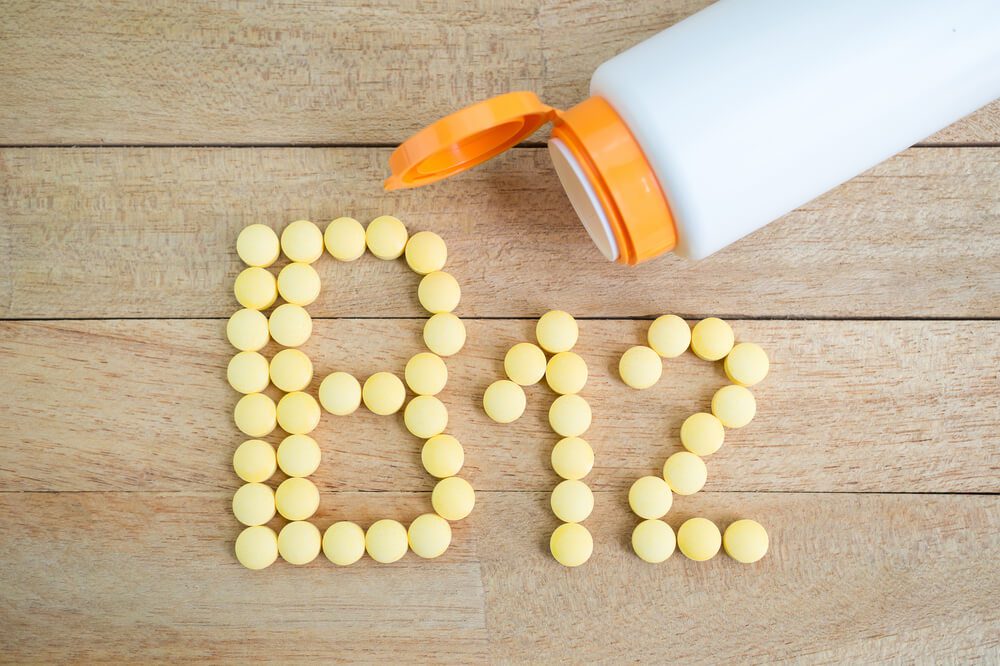 Sofia Pineda Ochoa, MD, is a practicing physician in Houston, Texas, who is certified by the American Board of Psychiatry and Neurology. She was a biochemistry professor at the University of Guadalajara’s School of Medicine in Mexico, and is also the director of the environmental documentary Endgame 2050. Visit Endgame2050.com for more about Dr. Pineda Ochoa.