The American diet is changing. More people than ever are questioning the wisdom of consuming large amounts of animal foods and are moving to a life with more plant foods. Indeed, this shift is evidenced in the booming plant-based food industry, which saw $3.3 billion in sales in 2018 alone.

We all by now have heard of family or friends that have gone “vegan” or have adopted a “plant-based diet.” Others may even know people on a “whole-food, plant-based diet.” Some of this terminology is relatively new; some of it has a longer history. Further confusing things is how these terms are quickly evolving and often mean different things to different people. But what do these terms mean to most of us today? Let’s take a deeper dive.

What Is the Difference Between a Vegan Diet and a Plant-Based Diet?

A plant-based diet predominantly consists of plants; most people use the term to refer to a 100 percent plant diet, but some people include small amounts of animal products. A vegan diet totally eliminates all animal products.

Donald Watson coined the term “vegan” in 1944 to describe someone who fully abstains from all animal products for ethical reasons. It followed that a “vegan diet” completely eliminated animal-derived foods of all kinds, 100 percent of the time. Over time, more and more people have started to adopt the vegan way of eating for reasons other than animal welfare (such as health and the environment), and today “vegan diet” is commonly used to describe a diet that excludes animal products, regardless of motivation.

With a plant-based diet, the vast majority of food comes from plants. The term originated in the health science community, where it was more appropriate than “vegetarian” or “vegan.” First, the term is divorced from any ethical connotation; and second, it doesn’t mean “never eating meat” or “never eating animal products.” Consumption of very small amounts of animal foods can be inconsequential when speaking of the health benefits of a diet, an important nuance for science that is not captured by the term “vegan” or “vegetarian.” 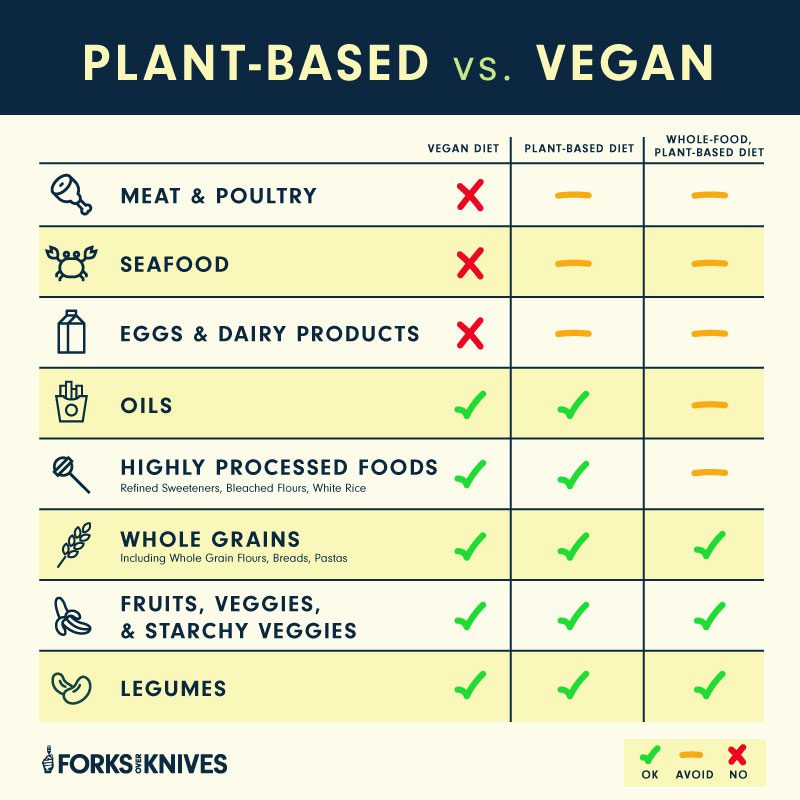 What Is a Whole-Food, Plant-Based Diet?

A whole-food, plant-based diet—which is what Forks Over Knives advocates—is centered on whole, unrefined or minimally refined plant foods and excludes or minimizes meat, dairy products, eggs, and highly refined foods such as bleached flour, refined sugar, and oil. A person eating this way will eat mainly fruits, vegetables (including tubers and starchy vegetables), whole grains, and legumes.

The “whole-food” part of “whole-food, plant-based” has become increasingly relevant, as highly processed vegan foods have become more widely available, making it possible to eat a vegan diet while eating very few whole plant foods. Simultaneously, for marketing purposes, many manufacturers have begun labeling these highly processed vegan foods as “plant-based.” This has effectively made “plant-based” and “vegan” synonyms when it comes to food labeling. Foods sporting the “plant-based” label are generally vegan; whether or not they’re healthful is another issue.

Can You Be Vegan and Whole-Food Plant-Based?

How We Got Here: A Brief History of “Plant-Based”

In 1980, T. Colin Campbell, PhD, was at the National Institutes of Health researching the potential therapeutic impact of a low-fat, high-fiber, vegetable-based diet on cancer. Campbell sought a succinct term that encompassed this eating pattern without invoking ethical considerations. Thus the term “plant-based” was born into the world of nutritional science. A few years later, after testifying against the supplement industry, Campbell appended the “whole-food” modifier to clarify that it was whole plant-foods, not isolated nutrients, that had health-promoting effects.

7 Things That Happen When You Stop Eating Meat
Jul 14, 2021
For Fork’s Sake: Rachael Brown’s New Book Makes Whole-Food, Plant-Based Eating Easy for Families
Sep 2, 2022
Are Potatoes Good For You? Everything You Need to Know About Starchy Vegetables
Jul 6, 2022

Brian Wendel is the founder of Forks Over Knives and creator and executive producer of the groundbreaking 2011 feature documentary film Forks Over Knives. Read more of his story here, and find him on LinkedIn.