Meet Matt Frazier, the Vegan Ultrarunner Behind “No Meat Athlete”

Matt Frazier is a marathoner and ultra-runner who runs the popular fitness site No Meat Athlete. But Matt says that growing up, he wasn’t that into running or fitness. His journey began in college, when he started going to the gym. On a whim, he and a group of friends decided to try to run a marathon. Matt’s personal goal was to qualify for the Boston Marathon. He missed the qualifying time by 103 minutes. In his own words, he “wasn’t a runner.” He also lived on the typical college diet of junk food and takeout.

Over the next six years, Matt started running more and improving the way he ate. After five marathons, he still hadn’t qualified for the Boston Marathon. In early 2009, he decided he was going to go vegetarian for ethical reasons. Although he was scared the change would affect his running performance, he couldn’t deny his feelings on the subject. He started a blog to document his progress.

Matt immediately saw results: “I got faster immediately, and six months later, I qualified for Boston. Once that happened, I went vegan. I kept getting faster, and after that, I started to run longer distances of 50 and 100 miles.”

He’s still racing and doing ultras, and about two years after he started his blog, it became a job. (He was in graduate school studying applied math when he first started No Meat Athlete.) The website now has hundreds of thousands of readers and has a very popular podcast and newsletter.

(May, 2017 Update: Matt and yoga teacher and health coach Stepfanie Romine just published The No Meat Athlete Cookbook: Whole Food, Plant-Based Recipes to Fuel Your Workouts and the Rest of Your Life. It’s chock-full of delicious plant-based recipes, all with oil-free options, like this Quinoa Primavera.)

We caught up with Matt to chat:

Forks Over Knives: What do your readers ask you about most?

Matt Frazier: The protein question is the most-asked question, of course. I also get asked about supplements and if I take any. I do take a multivitamin and B12 supplement, but I don’t take any protein powder or anything like that. I also get some running form questions.

FOK: What are some of the most popular things on your site?

MF: We have some nutrition articles that are always popular, like “Protein—A Primer for Vegetarians,” but we also have some unique posts like “Why Vegans and Paleos Should Stop Hating Each Other” that readers really like. For podcasts, “Live to be 100—Lessons from the Blue Zones” and “21 Weird Things We Do Now That We’re Vegan” are popular.

MF: I usually start my days with smoothies made of fruits, vegetables, and nuts. Very simple. I like pita and hummus for snacks. For meals we do a lot of ethnic dishes like beans and rice, Thai, Indian, Italian, and things like that. Every day I also have one big salad with a meal.

I never count calories, but I probably eat more on workout days because I’m hungrier. Fresh whole dates are my favorite running snacks. For really long runs or races where I have to actually bring food along, I like refried beans on corn tortillas or hummus and pita.

FOK: Who are your inspirations?

MF: I am inspired by a lot of people, but I especially look up to Rich Roll, Robert Cheeke, Brendan Brazier, Michael Arnstein, Dr. T. Colin Campbell, and Dr. Joel Fuhrman.

FOK: What’s your favorite thing about your website? Anything exciting coming up?

MF: I love doing the podcast and interacting with people on social media, but I especially am proud of the “No Meat” running groups that have popped up all around the country and all around the world, from Virginia Beach to Oklahoma City to Sydney, Australia. For me, it’s all about people making connections.

I’m also excited for my new book, written with Stepfanie Romine, coming out next year in 2017. [Matt’s first book was 2013’s No Meat Athlete.]

FOK: Why do you think your blog became so big?

MF: One thing that makes me unique is that I don’t do a lot of preaching. I’m more into helping people than lecturing. For example, some people might need to learn to be vegetarian until noon before they can go on. Sometimes it’s about baby steps. I tend to be allergic to vegan preaching. One of the reasons that I didn’t go meat-free earlier was because I didn’t want to one of those judgmental vegans or vegetarians.

I try to just be a good example in my life. I think that’s part of the reason people find me and stick around. 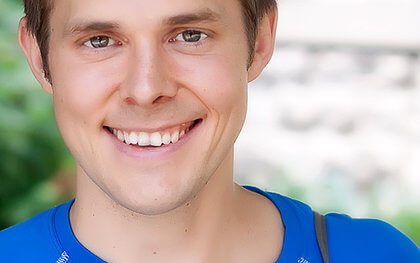