I Suffered a Widowmaker Heart Attack at 45. Today I’m Thriving on a Plant-Based Diet

I’ve lived in Texas my whole life, raised by parents who liked to fry stuff. I played high school football and ate like a lineman, with a diet of gravy and chicken-fried steaks and anything else I could dip in gravy.

After graduating high school in 1992, my weight became a constant battle. At 6’1”, I could carry my extra weight fairly well, but my heavier days found me at 280, and during “skinnier” phases I would hover around 230. I tried all sorts of diets and weight-loss pills, but nothing had a lasting effect. The constant yo-yo became part of my life.

In the winter of 2019 I weighed around 255, and I just felt bad. I had no energy, my skin was pale, and my breathing was becoming labored. I was experiencing atrial fibrillation. I was only 45 at the time.

On December 21, 2019, after celebrating an early Christmas with my wife and kids, I was hanging up some of my new shirts and getting ready for bed when something just didn’t feel right. My arms and hands felt hollow. I crouched by my bed waiting for it to pass, thinking that it was just my atrial fibrillation giving me a hard time. After being there for about five minutes, I felt a little better, so I brushed my teeth and went to bed. But after five minutes in bed, I knew something was really wrong. By the time I was dressed and getting in the car for my wife to take me to the emergency room, I was sure that I was having a heart attack, less sure that I was going to survive it.

We got to the ER and they gave me nitroglycerin, confirmed that I was having a heart attack, and said they needed to put in a stent because of blockage. A few minutes after they told me the news, it happened: I had a widowmaker heart attack, right there in the ER.

I died twice; they brought me back and were able to do an emergency procedure to put in a stent and clear the blockage. But by the time I got home a few days later, it seemed clear that I was headed for an early death. My blood pressure, cholesterol, and A1C (a measure of average blood sugar) were all horribly high.

Then, as I sat in my living room early Christmas morning, I turned on Netflix and saw Forks Over Knives. It turned out to be the perfect message at the perfect time. I couldn’t believe the stuff they were talking about in the film—that I could reverse my heart disease and turn my health around. Although I’d always been the type of guy who made fun of vegans, I made the decision then and there: I’d give up meat, dairy, and highly processed foods, and adopt a whole-food, plant-based lifestyle.

To be honest, I found the transition to WFPB really easy, even coming from a steady diet of chicken strips, gravy, and french fries. It helped that my wife (who was already very healthy) chose to do it with me. I also gave up caffeine, but fortunately, I found that after two weeks on this diet, my energy was through the roof. Also, after just two weeks, I’d already lost 10 pounds. I hadn’t even considered the weight-loss aspect; I was simply trying not to die. But it was a nice surprise benefit.

After years of trying every diet program imaginable—Atkins, keto, SlimFast, Weight Watchers, Nutrisystem—I finally understood the meaning of a lifestyle change. With WFPB, I wasn’t just on a diet. I was changing my future.

Three months after starting the WFPB way of eating, I went back to the doctor for more tests. My weight had dropped from 247 to 218. My total cholesterol had decreased from 217 to 124, with my LDL cholesterol decreasing from 161 to 63. My blood sugar decreased from 237 to 120. My A1C had decreased from 7.2 (which indicates diabetes) to 5.1 (within the healthy range). My blood pressure had gone from 140/100 to 105/60. And my heart function had improved significantly. All of that in just three months. It took 90 days to reverse a lifetime of awful eating and horrible health.

I’m now a year and half on the other side of the heart attack. I’m still living the WFPB lifestyle, and today weigh 197 pounds. My numbers all still look great. I still have a lot of energy, and I try to go for walks as often as possible, usually putting in about 3 miles per day during the summer. I haven’t felt this good in 25 years.

I share my story often, and fortunately, it has inspired others in my life to try this way of eating, too. I never dreamed I would be inspiring or giving health advice to others, but here I am! If this bull-headed, football-playing, chicken fried steak–eating guy can change, then anyone can. 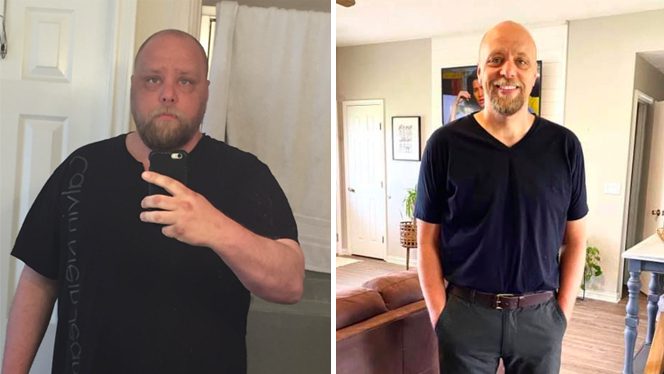 Don’t Overlook These 5 Sneaky Signs of Heart Disease
Jun 23, 2022
What is Cholesterol? How It Works, Foods to Avoid, and the Truth About HDL
Jun 17, 2022
1 in 4 Adults Has Nonalcoholic Fatty Liver Disease. Most Go Undiagnosed, Posing Heart Risks
Apr 28, 2022