How I Lost 220 Pounds, Became an Ultra-Runner, and Transformed My Life

As you may be able to tell by my very French-sounding last name, I am proudly from South Louisiana, where we “live to eat” (it’s even on billboards … really!). I grew up hunting, fishing, drinking, playing football, and eating a lot of deep fried and rich Cajun foods. Until a few years ago, I was also on the fast track to becoming a statistic. With a strong family history of heart disease on both sides of my family, I found myself weighing in at 410 pounds at the ripe old age of 32.

Concerned, I joined a gym with a lifelong friend in February of 2011, determined to lose weight before facing the conclusion of my final senior semester at Nicholls State University here in Louisiana. You see, besides being ten years older than everyone in my class, I was also 200 pounds heavier, and that made me extremely anxious about my impending presentations. I was worried about being the fat old guy with beads of sweat on his forehead and a belly hanging over his belt.

By the time I was making my presentations for my capstone course in May of that year, I had lost 60 pounds! I was feeling amazing and proud, not just about the weight loss, but also about earning a degree. It was around this time that I read about running as a way to create long-duration aerobic, fat-burning workouts for the human body. This grabbed my attention, and I started to run—as a 300+ pound guy! Running really hurt at first, but eventually I grew to like it so much that I entered a 10K race, the Crescent City Classic (CCC), in New Orleans. I achieved my goal that day—which was just to finish the race—but afterward I wanted more than weight loss: I wanted to become a runner!

This desire led me to read a book called Born to Run. Wow, did things change after this. I learned of vegan ultra-marathoner Scott Jurek in this book. Before reading about him, I had dismissed the vegan diet as some nothing more than an extreme thing that one did as a political statement. I had never thought of it as an asset to an extreme athlete before. After learning of Jurek, I read his book Eat & Run, and followed that by reading Finding Ultra, by Rich Roll. Another vegan ultra-endurance athlete, Roll had begun his running career at the age of 40. To get there, he had to overcome substance abuse and what he calls the “window diet” (referring to the drive-through window … I could relate). His story really resonated with me, and I was starting to see the light.

As I drilled down further into the plant-based diet, I discovered the documentary Forks Over Knives, which gave me a new perspective: rather than being an extreme regimen for athletes, this way of eating is the healthiest way for any of us to exist—and inside of that, the human body can achieve magnificent feats. Being introduced to firefighter Rip Esselstyn in FOK didn’t hurt either: he was just further proof that vegans are not wimpy or extremists. To use Rip’s words, “real men eat plants!”

I have lost 220 pounds overall. Since the spring of 2013, when I went 100% plant-based, I have also changed my health trajectory for the better in a major way. I have become an advocate for plant-based living, which could rid our country of most chronic disease and eliminate the inhumane, despicable treatment of other sentient beings. I have also raced several marathons, including two ultra-marathons … and I just ran my first 100k last month (October of 2015). The thing I am most proud of, however, is having helped six of my family members to make healthy changes in their own lives: to date, they have lost nearly 1,000 pounds combined!

All of this has led me to the undeniable conclusion that plants are what humans are supposed to eat, period. It’s what Mother Nature wants us to do, which is why she rewards us by freeing us from the prisons of our lifestyle-induced chronic diseases. 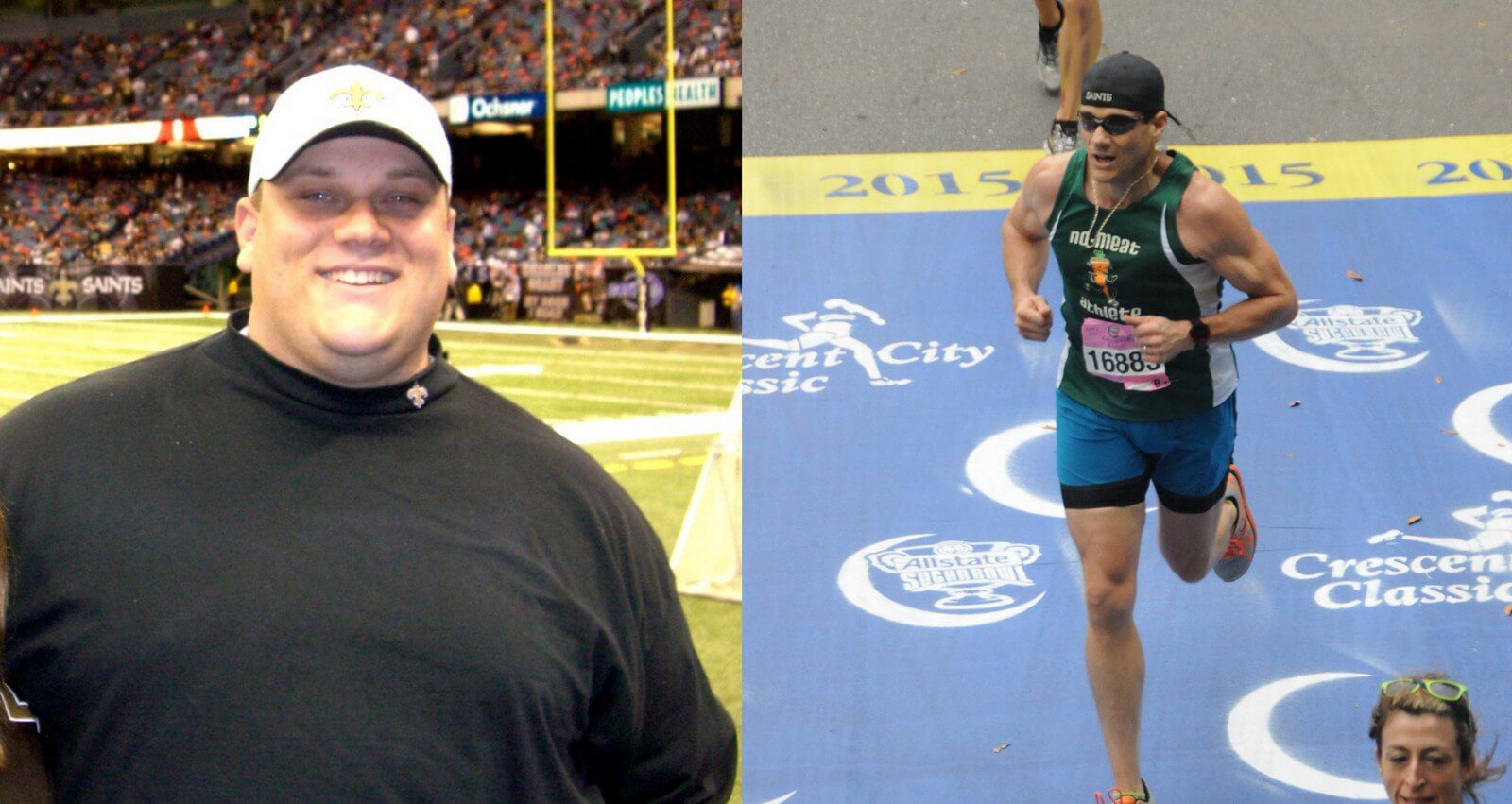