I grew up at the tip of southern Texas with four brothers and three sisters. When I was eight years old, my father abandoned our family, and my mother was left to raise eight children on her own. In search of better employment, she moved us to the Chicago area in 1982. In high school, I thrived as an athlete and earned a football scholarship to the University of Michigan. In those days, I could eat whatever I wanted and did not have weight issues, because I was so physically active. At twenty-one years old I was 6’2″ and weighed 305 pounds.

As a young adult, I witnessed my beloved mother, the rock of our family, battle type 2 diabetes and the complications that come with it. She suffered from kidney failure, vision problems, and heart disease. After 33 years of fighting diabetes, she passed away in April of 2002. I miss her dearly. Just two months later, my oldest brother David passed away from pancreatic cancer.

Out of eight siblings, my sister Jill is the only one who has not been diagnosed with type 2 diabetes. But she, too, has felt its impact personally, since she donated one of her kidneys to our mother. My sisters Carol and Sandra, and my brothers Martin and Joe (my twin), have all struggled with the disease for years. Just two months ago, Joe also suffered a heart attack. Martin suffers terribly: he has had a pancreas and kidney transplant, is legally blind, had his right leg amputated, goes to dialysis three times a week, and takes 25 medications every day.

My Own Struggle With Diabetes

I have also struggled with diabetes. I was diagnosed with the disease the same year that it claimed my mom’s life. At that time, I began taking five different oral medications including Metformin and Januvia for diabetes, Simvastatin for high cholesterol, and Lisinopril for high blood pressure. Back in 2002, my hemoglobin A1C level was 8.8. (The A1C test is a 3-month average of blood sugar levels; the current A1C range for a non-diabetic is between 4 and 5.7.) By September of 2011, my level had risen to 10.5, and that’s when my doctor prescribed insulin injections (Lantus).

As my A1C levels rose gradually over the years, I tried to improve my health by dieting, exercising more, and cutting carbs. Unfortunately, these strategies did not stop the progression of diabetes. (Later I learned that carbs are not the enemy—fat is.) Eventually, when my doctor told me that I had to begin injecting insulin daily, I felt very frustrated and helpless. I remember asking my doctor if I could ever stop taking the insulin injections. His response was “No.” This really pissed me off. But hey, what did I expect? My family is filled with diabetics, and I am Latino, an ethnicity with an unusually high percentage of diabetics. For years I had witnessed my family’s intense suffering from diabetes, and I saw myself as destined to walk the same path.

In the fall of 2011, my in-laws gave my wife Kim and me a copy of Forks Over Knives. It sat in our home for a few months before we watched it. One day, feeling hopeless about my diabetes, we decided to watch the film. We also purchased Dr. Neal Barnard’s Program for Reversing Diabetes, after which we were so inspired that we decided to give this way of eating a try … it just made sense. On December 3 of 2011, we both began our whole-food, plant-based diet, and our lives and health have not been the same since.

I now follow three basic guidelines: I eat no animal products, I eat low-fat foods, and I avoid high-glycemic foods. I enjoy meals like oatmeal with cinnamon and raisins, pasta primavera, bean burritos, veggie subs, veggie burgers, and plenty of fruits and vegetables such as strawberries and sweet potatoes. (Note that this is not a low-carb diet. In fact, it’s mostly complex carbs. Carbs are not the enemy … high-fat foods are! Fat gets in cells and prevents insulin from working properly.)

Off All Medications in Two Months

In less than two months, I was off of all my medications, and I have been med-free for over three years. I am proud to say that I am no longer diabetic. When I began this journey, I weighed 254 pounds. Today I’m at 207 pounds, which is what I weighed in the 7th grade!

Marc’s transformation after three months on the diet. He’s wearing the same gray pants in both photos.

I have learned that I had diabetes not because I am Mexican or because my family is predisposed to the disease. It all comes down to my daily food choices. By replacing nutrient-poor foods with highly nutritious ones, my body has responded positively. I’m happy to report that my oldest sister Carol has also eliminated her diabetes medications by switching to a mostly plant-based diet.

My wife Kim and I are empowered and liberated by our new whole-foods, plant-based lifestyle. We feel strong, healthy, and in charge of our lives. In addition, this lifestyle is kinder to animals and better for the environment. We are so thrilled with our experience that we want to shout about it from a mountaintop. Our website, Chickpea and Bean, is our mountain, and we are shouting! We want to share our success and inspire others to experience for themselves the profound transformation this lifestyle offers. 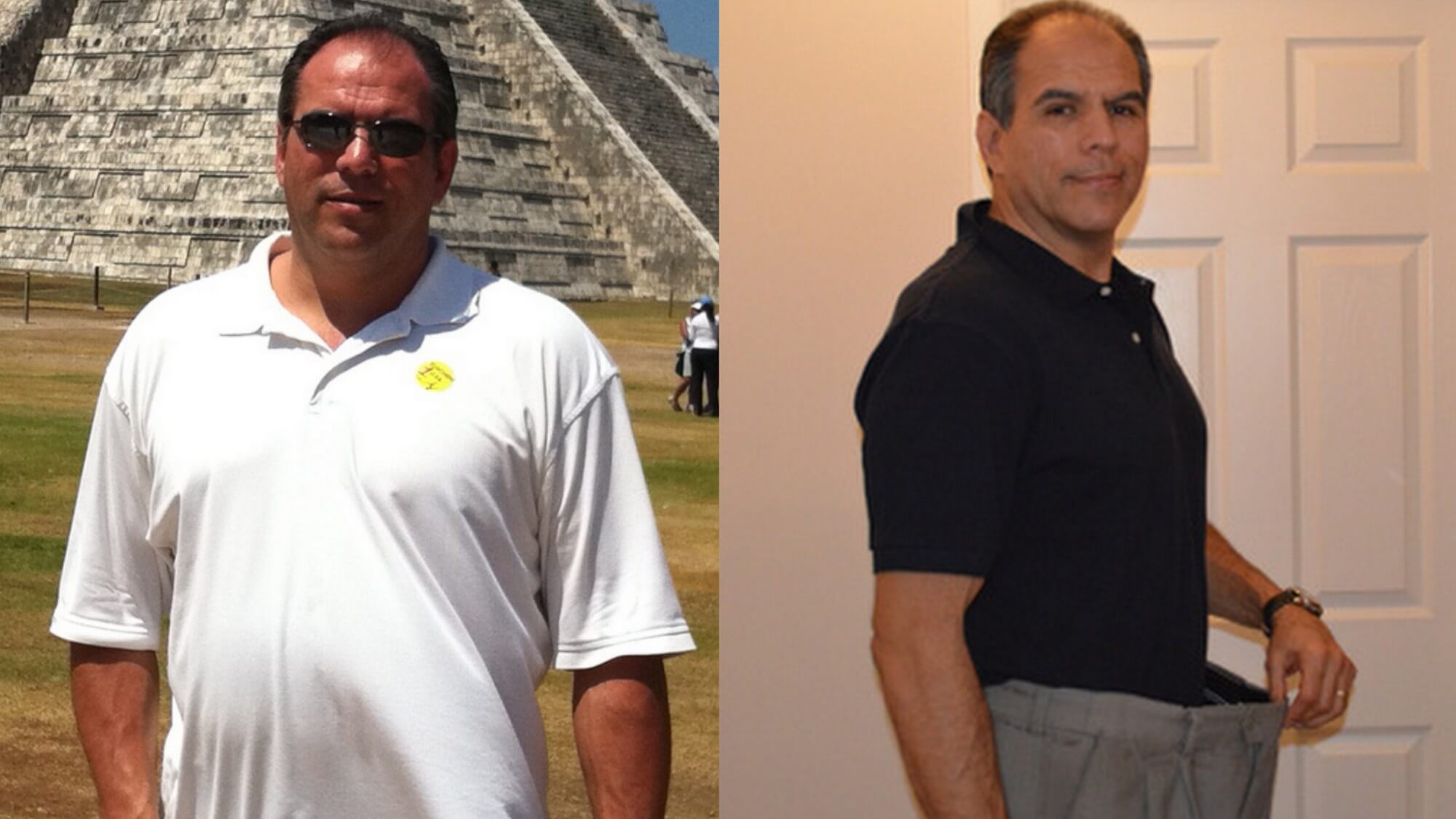