How I Lost 140 Pounds, Cured My Type 2 Diabetes, and Saved Thousands in Medications

In 2010, my doctor suggested that I purchase a funeral plot, because I would most likely need one within five years unless I lost weight and got my chronic health conditions under control. I was 51 years old and taking well over $1,000 in medications per month. I had type 2 diabetes; my total cholesterol was 300; my blood pressure was 160/100; I was about 320 pounds at 5’10”, my waist was 52 inches, and my shirt size was 3XL. I was constantly exhausted and sleeping ten to twelve hours each night. It was becoming harder and harder to walk, and I couldn’t tie my shoes or walk up a few stairs without becoming out of breath. I was single but hadn’t been on a date in 15 years and stopped attempting to maintain friendships or even leave my home except when absolutely necessary.

I had been overweight for 30 years and was morbidly obese. I had tried most of the fad diets marketed for weight loss in this country, including Atkins, South Beach, Weight Watchers, Nutrisystem, and many more. I used my best efforts to follow each of those diets, and was usually able to lose some weight. But eventually I found all of them to be unsustainable, and when each failed I quickly regained the temporary weight loss, plus an extra ten pounds. And then I would resume eating packaged and processed foods that were delivered to my home or served to me through the window of my car.

My final straw came in August 2010, as I was returning home from a business trip. My flight was delayed when my airline ran out of seat belt extensions, and the regular seatbelt was too short for me to buckle. As my airplane sat at the terminal, the man next to me said that he would miss his connection because I was too fat.

When I returned home, I made an appointment to schedule bariatric surgery. But the next day, I saw Bill Clinton interviewed on CNN, and he was asked about his recent weight loss. Mr. Clinton talked about getting back to his high school weight and reversing his heart disease by following a plant-based diet, based on the book The China Study by Dr. T. Colin Campbell, in addition to dietary guidance by Drs. Caldwell Esselstyn and Dean Ornish. I had never heard of a plant-based diet, so I Googled the term and was surprised that my search did not return any information or a plan I could follow (it would still be some months before Forks Over Knives was released). At age 51, I could not recall ever eating a meal without animal products. So I ordered a copy of The China Study and, while reading it, decided to hire a nutritionist and learn what a plant-based diet was about.

I was fortunate to find a nutritionist who also followed a plant-based lifestyle. In our weekly appointments, she taught me how to cook and what to eat. I began cooking for the first time in my life and stopped consuming all animal products, processed sugar, and oils. Most importantly, I learned that a plant-based diet wasn’t just salads and apples, but included the foods I liked best, including rice, beans, potatoes, lasagna, and Asian and Mexican food. I was able to eat foods I liked, and as much as I wanted.

My nutritionist also encouraged me to adopt a dog from an animal shelter to walk each day. So I went to the Humane Society and asked for an obese middle-aged dog so we would have something in common. Then a friend took me to me to a Body Pump exercise class. Just by walking my new dog, going to a one-hour exercise class three times per week, and practicing my new plant-based diet, I began losing 3 to 5 pounds per week.

Over the next year, my weight dropped from 320 to 180. My palate changed, and I began to strongly prefer my new diet over what I ate previously. In addition to my weight loss, my total cholesterol dropped to 130, my blood pressure went down to 118/60, and my glucose and all other medical stats became normal. Best of all, I no longer had any symptoms of type 2 diabetes or required any medications.

My waist size is now 33 inches. I have a 16-inch neck, and I wear a size medium shirt. I need only about seven hours of sleep each night, and I wake up feeling rested and filled with energy. My energy and mental clarity are extraordinary compared to before. I have friends again and feel attractive for the first time in my life. After I lost my weight and got in shape, I found that I enjoyed long-distance running, and I even qualified for the Boston Marathon in 2013. I presently enjoy my life in Seattle as a lifestyle vegan, plant-based nutrition and fitness enthusiast, and animal welfare activist. I have enjoyed speaking to community and nonprofit groups on the subject of “becoming the person you’ve always wanted to be,” through plant-based nutrition and a healthy, sustainable lifestyle. 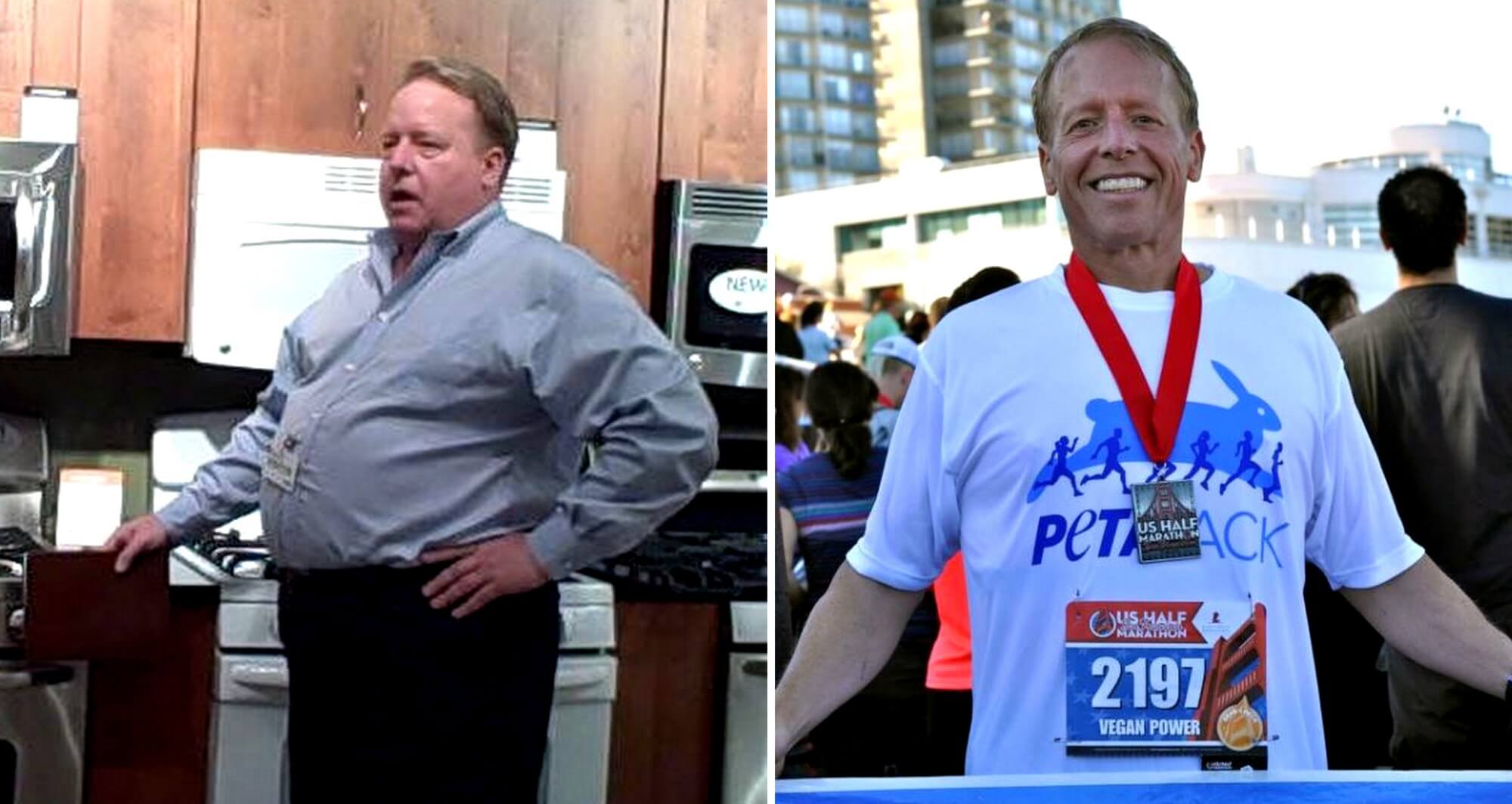 New Report: Prediabetes Rates in American Teens Doubled in the Last 20 Years
Apr 19, 2022
I Thought Weightlifting Could Offset an Unhealthy Diet. I Was Wrong
Aug 9, 2021
A Carb-Centric Diet Helped Me Recover from Type 2 Diabetes
Jun 22, 2021