After Decades of Dieting and Depression, I’m Healthy and Happy on a Plant-Based Diet

I started dieting at the age of 9. Every time I lost weight I swore to myself that I’d never regain it—but every time, the old habits returned, along with the weight.

By 2013, at age 55, I was at the end of my rope. I was in the grips of a lifelong depression that had suddenly gone from bad to worse, and my feet and knees ached relentlessly. At just 4-foot-11, I weighed 220 pounds. (That’s a BMI of 44.) I knew that I couldn’t continue on that path, but another round of counting calories and portion control was out of the question.

The first thing I did was start a mindful eating practice—without which, I’m convinced my transformation wouldn’t have been possible. By paying attention to my food, thoughts, and feelings, I was able to start to understand what was driving me to overeat. This wasn’t a speedy process. It took nearly two years. But it laid the foundation for what was to come.

The first time I saw Forks Over Knives, something didn’t quite connect in my brain. I was a lacto-ovo vegetarian and in so much denial that I didn’t see that the diet style presented in the documentary was radically different from mine—possibly because I was still buying into the whole “everything in moderation” myth, thinking that there was nothing wrong with eating a small amount of cheese every day.

My eyes were opened when I started researching the connection between inflammation and depression. I stumbled upon the research of Michael Greger, MD, a whole-food, plant-based doctor. After that, I rewatched Forks Over Knives, and the dots connected. I realized that dairy was likely contributing to my depression and probably to my weight problems, too.

One of my first thoughts was “Oh please—anything but dairy!” I loved cheese; in fact, I felt that nothing tasted good unless it was buried under a mountain of it. But I decided that I would give up dairy as a two-week experiment. After all, I could endure anything for two weeks.

I lost 7 pounds within a matter of days, which was a huge motivator. By the end of the two weeks I was starting to think that maybe I was on to something. I extended my experiment for another month. I continued to lose weight and decided that I’d need to give it a full six months, just to be sure.

The cravings set in around that time. I wanted pizza badly. I wanted cheese; I wanted ice cream. These weren’t the kinds of cravings that you can easily distract yourself from. They were intense and unrelenting. In hindsight I can see that it was probably a kind of withdrawal. Cheese was my drug, and I wanted it. Forks Over Knives helped sustain me. I probably watched it once a week during that period. It provided the motivation I needed to keep going.

Once I was off dairy, I gradually made other changes, eating far more vegetables than I ever thought possible, phasing out salt and oil, and exercising more.

Since going whole-food, plant-based more than five years ago, I’ve lost 90 pounds. The lifelong depression has lifted, and I’ve taken up a more active lifestyle, running three 10Ks and numerous 5Ks (although I had to switch to bicycling in the past year, as my knees were too badly damaged from a lifetime of obesity to continue running).

Now, I help others live a healthier life. I earned a certificate in plant-based nutrition from the T. Colin Campbell Center for Nutrition Studies. I’m a coach, specializing in helping people who have a long history of yo-yo dieting, and I have a YouTube channel where I demonstrate the preparation of whole-food plant-based meals. I know the old habits aren’t coming back this time. I feel too good.

4 Foods I Batch-Cook Every Week

When you have the building blocks ready to go, healthy weekday meals come together quickly. Here are a few staples that I batch-cook regularly.

Whole Grains: Intact whole grains are integral to a whole-food, plant-based diet, and my fridge is rarely without a bowl of them. I like to mix and match, combining a few grains that cook similarly, such as brown rice, whole barley, rye berries, and/or whole spelt.

Vegetables: Roast a medley of your favorite veggies on the weekend to add to tacos, burritos, grain bowls, and more throughout the week. I roast three large trays of bell peppers, red onions, mushrooms, broccoli, and cauliflower, and like to mix in at least one seasonal veggie.

Potatoes: After roasting my veggies, I keep the oven hot and bake several Yukon Gold potatoes and sweet potatoes. Baked sweet potatoes freeze well: Cut them into thirds; place the pieces on a sheet pan in the freezer. Once frozen, transfer the pieces to a freezer-safe zip-top bag. Thaw in the microwave as needed.

Breakfast Oats: Once a week, I cook a big pot of whole oat groats and divide it into three containers. I refrigerate one and freeze the other two. When I’ve eaten the batch in the fridge, I pull one from the freezer and let it thaw, refrigerated, for 24 hours. 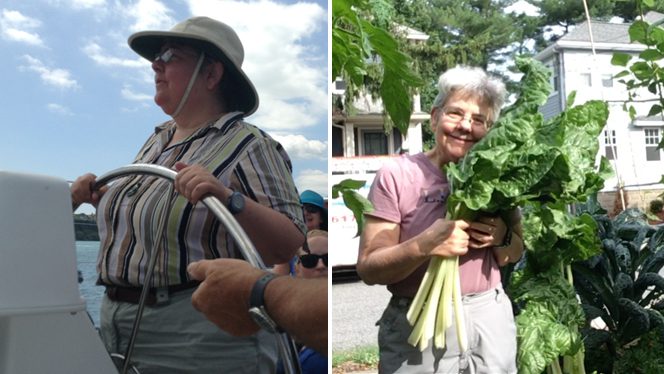