Gain skills and confidence in the kitchen with these healthy-cooking how-to’s for whole-food, plant-based home cooks. 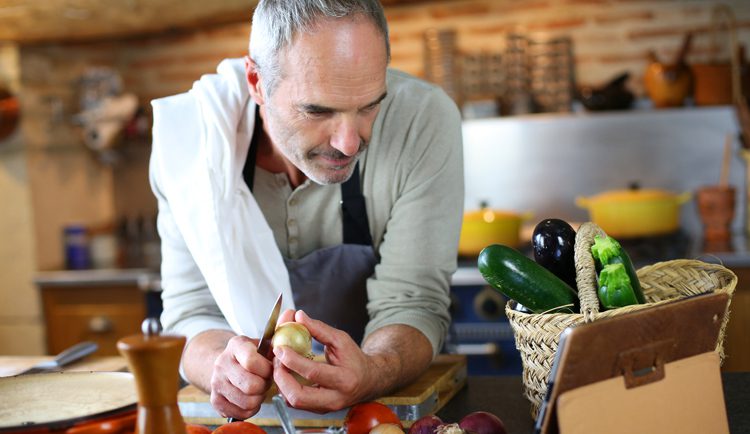 How to Sauté, Bake, and Roast Without Oil

All oils are ultraprocessed, calorie-dense, and stripped of almost all nutrients aside from fat. That’s why, for optimal health, Forks Over Knives recommends eliminating or minimizing all oil from the diet. But how do you sauté, roast, or bake without oil? It’s easy, once you get the hang of it. Plant-based chef and cookbook author Darshana Thacker Wendel tells you everything you need to know about one of the most essential whole-food, plant-based cooking techniques. Read her handy guide: 3 Expert Tips on How to Cook Without Oil.

When a recipe calls for slicing or dicing an ingredient to a certain size or shape, it’s important not to cut corners. Knowing basic knife skills can help this essential prep work go faster and more smoothly. In this helpful how-to, learn how to hold a knife correctly; the best way to dice an onion, and other essential cutting techniques; plus, the only three knives you really need: Knife Skills for Beginners: A Visual Guide to Slicing, Dicing, and More.

How to Cook Whole Grains

Packed with fiber and other nutrients, whole grains are a bedrock of the whole-food, plant-based diet. From amaranth to wheat berries, our comprehensive overview of whole grains gives the scoop on some common types (including gluten-free options), with a chart breaking down the cook times and water volumes for 20 different grains. Read our guide to whole grains here, and be sure to bookmark it for future reference. For a deeper dive into cooking brown rice, see How to Cook the Perfect Pot of Brown Rice Every Time.

How to Rock a Stir-Fry

Yes, in addition to sautéing and roasting without oil, you can stir-fry without oil! Veggie stir-fries are a reliably satisfying weeknight meal and a tasty way to use up veggies, tofu, and any grains you might have on hand. Perfect the oil-free technique and learn some key do’s and don’ts to keep in mind when making any stir-fry with this primer, which also features a roundup of some of our favorite stir-fry recipes that are bound to make their way into your weekly vegan cooking routine. Read the guide: How to Stir-Fry Veggies, Tofu, and More.

How to Whip Up Nice Cream

Nice cream is perhaps the easiest and healthiest dessert ever, and it’s truly delicious. The concept is simple: freeze fruit; then blitz it in a food processor or high-speed blender. That’s it. But certain fruits work better than others for nice cream. Learn which are your best options, plus some tasty combinations and flavor enhancements to try, with our Beginner’s Guide to Nice Cream.

Store-bought veggie broth is often loaded with sodium. Homemade broth is healthier, more flavorful, and it’s a great way to reduce food waste by using up veggie scraps. Make your own batch at home using a master recipe from Forks Over Knives contributing editor and all-around culinary whiz Mary Margaret Chappell. Get the recipes, and then experiment with her six suggested variations (including mushroom, vegan “chicken,” and French-style). Get the guide: How to Make Vegetable Broth.

How to Blanch Produce

Want to cook perfectly crisp-tender veggies, easily remove the skins from tomatoes for a sauce, or preserve fresh fruits and veggies for longer? These are just a few of the uses for blanching—a simple cooking technique that every home chef should have in their repertoire. Learn how to blanch and which fruits and veggies best lend themselves to blanching in this guide: Blanching 101: How to Blanch Vegetables and Fruits.

The Right Way to Read a Recipe

Although reading a recipe might seem pretty simple on the surface, there are often small details that, if overlooked, can throw a wrench in your cooking experience. It’s helpful to understand the nuances of recipe writing—like how to spot “hidden” ingredients and the difference between “1 cup chopped nuts” and “1 cup nuts, chopped.” This primer will teach you how to do just that: How to Read a Recipe.

Take Your Kitchen Skills to a Whole New Level

Become a plant-based home chef in 90 days with Forks Cooking Course, an online cooking course with 55 hours of content that you can consume at your own pace, live Q&As with chef-instructors, quizzes to track your progress and more.