A common question I hear as a dietitian (second only to “Where do you get your protein?” of course) is “What’s wrong with eggs?”

Where to begin? Let’s start with the obvious egg facts. Eggs have zero dietary fiber, and about 70 percent of their calories are from fat—a big portion of which is saturated. They are also loaded with cholesterol—about 213 milligrams for an average-sized egg. For reference, people with diabetes, cardiovascular disease, or high cholesterol should consume fewer than 200 milligrams of cholesterol each day. (Uh oh.) And, humans have no biological need to consume any cholesterol at all; we make more than enough in our own bodies.

Why so much fat and cholesterol in such a tiny package? Think about it: eggs hold every piece of the puzzle needed to produce a new life. Within that shell lies the capacity to make feathers, eyes, a beak, a brain, a heart, and so on. It takes a lot of stuff to make such a complex being.

In addition to these excessive (for humans) natural components of an egg, other human-health hazards exist. Because eggshells are fragile and porous, and conditions on egg farms are crowded, eggs are the perfect host for salmonella—the leading cause of food poisoning in the U.S.

Those are some facts and figures. But how do eggs affect real people in real life? Luckily, researchers have conducted good studies to help answer that question.

In a 1992 analysis of dietary habits, people who consumed just 1.5 eggs per week had nearly five times the risk for colon cancer, compared with those who consumed hardly any (fewer than 11 per year), according to the International Journal of Cancer. The World Health Organization analyzed data from 34 countries in 2003 and found that eating eggs is associated with death from colon and rectal cancers. And a 2011 study funded by the National Institutes of Health showed that eating eggs is linked to developing prostate cancer. By consuming 2.5 eggs per week, men increased their risk for a deadly form of prostate cancer by 81 percent, compared with men who consumed less than half an egg per week. Finally, even moderate egg consumption tripled the risk of developing bladder cancer, according to a 2005 study published in International Urology and Nephrology.

A review of fourteen studies published earlier this year in the journal Atherosclerosis showed that people who consumed the most eggs increased their risk for diabetes by 68 percent, compared with those who ate the fewest.

In a 2008 publication for the Physicians’ Health Study I, which included more than 21,000 participants, researchers found that those who consumed seven or more eggs per week had an almost 25 percent increased risk of death compared to those with the lowest egg consumption. The risk of death for participants with diabetes who ate seven or more eggs per week was twice as high as for those who consumed the least amount of eggs.

Heart Disease
Researchers published a blanket warning in the Canadian Journal of Cardiology, informing readers that ceasing egg consumption after a heart attack would be “a necessary act, but late.” In the previously mentioned 14-study review, researchers found that people who consumed the most eggs increased their risk for cardiovascular disease by 19 percent, and if those people already had diabetes, the risk for developing heart disease jumped to 83 percent with increased egg consumption.

New research published this year has shown that a byproduct of choline, a component that is particularly high in eggs, increases one’s risk for a heart attack, stroke, and death.

Animal Protein
Inevitably, this discussion also leads to another question: “Even egg whites?” Yes, even egg whites are trouble. The reason most people purport to eat egg whites is also the reason they should be wary — egg whites are a very concentrated source of animal protein (remember, the raw material for all those yet-to-be-developed body parts?). Because most Westerners get far more protein than they need, adding a concentrated source of it to the diet can increase the risk for kidney disease, kidney stones, and some types of cancer. 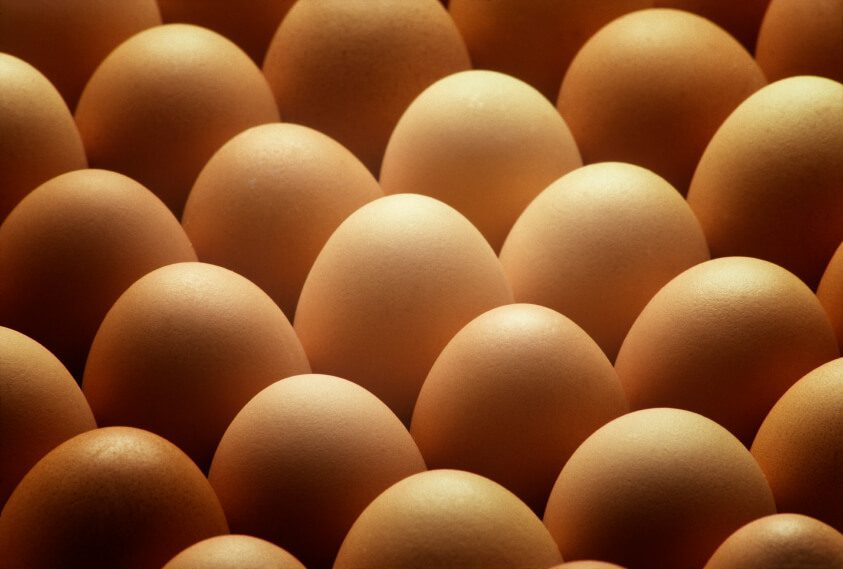 Susan Levin is director of nutrition education at the Physicians Committee for Responsible Medicine, a Washington, D.C.–based nonprofit organization dedicated to promoting preventive medicine. Levin researches and writes about the connection between plant-based diets and a reduced risk of chronic diseases, including cancer, diabetes, and heart disease. Find her on Twitter.