Two Heart Attacks at Age 29: a Story That Ends Well

On July 9th of 2013, I had a heart attack at age 29. It hit me at the Walgreens pharmacy, after a couple of bouts of intense anxiety had plagued me over the prior week. BAM!!! The pain was excruciating. My only thought was that I was going to die in Walgreens. The pharmacy clerk called 911, and an ambulance took me to Banner Estrella Hospital in Phoenix.

I arrived with an IV in my left arm, oxygen in my nose, and meds that had put me into a really weird state of mind. After several hours a nurse delivered the news: “Your enzymes are up, and we have confirmed that you had a heart attack. You’re not going anywhere for a while.”

Once again, anxiety overwhelmed me. I kept thinking how my life was going to change and how I was never going to see my 50th birthday or watch my boys grow up. People asked me lots of questions, because I was so young and not obese or a drug addict … Why had this happened? I just answered their questions and prayed they would go away so I could go back to sleep. I had crazy nightmares as my body was adjusting to the meds.

After several days, I was released from the hospital. Each day at home I felt trepidation, always expecting the worst. My anxiety had taken over, and I felt I could roll over and die of a heart attack any minute. The world was scary, and I didn’t want to leave my house. I had become a prisoner in my own home.

Fast-forward to July 19th. As I was filling out some paperwork, it happened again: I felt that strong familiar jaw pain. Rather than calling 911, I got in my car and drove to the ER. Sure enough, I was having another heart attack. So back to the surgery room and the ICU, where the whole saga repeated itself.

Who would have guessed the direction my life would head next? Just four months after my second heart attack, my health prognosis took a 180-degree turn for the better! This would never have occurred if it weren’t for Nathaly, my nurse, who introduced me to Forks Over Knives. “Watch it—I was meant to be your nurse, so I could show you this,” she said. What an awesome person!

The film was a life-changer. I had never been obese, but I was overweight, ate out daily, and consumed very little water. Now I eat nothing but plants, and only minimal processed foods. In less than four months, I lost 63 pounds, reached my goal weight of 170, and my cholesterol dropped 177 points. After attending cardiac rehab three times a week, I already went off of Lisinopril, because my heart got stronger.

Yeah, it was a challenge. But exploring new avenues, shopping for veggies that I have never tasted before, putting new recipes together, and watching my energy rise has been fun and rewarding. Going vegan was the best choice I ever made. It’s definitely a lifestyle change, and I am loving every minute of my life!!!

This heart attack was a blessing in a nightmare. It’s hard to explain. The world is slower now. I have rebuilt bridges I had burned, and I’m just excited to wake up every morning. Special thanks to my friends and family, to Forks Over Knives, and to Banner hospitals. 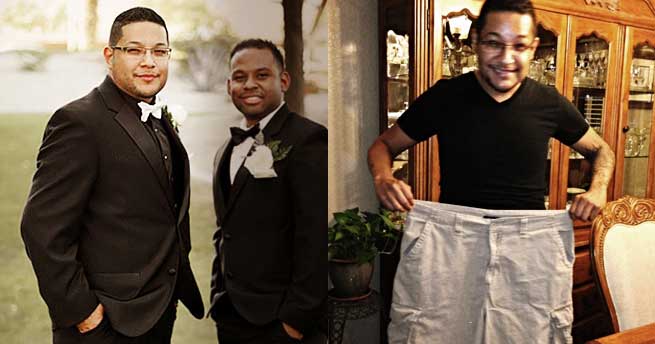