Sixteen years of poor lifestyle choices had left my life in ruins. My marriage had dissolved. My connection to friends and family members had been almost completely severed. I had bounced between jobs for a few years. My health was getting worse by the day. The root of it all: alcohol and poor diet. I had nightly drinks, more than I care to admit. I ate greasy, fatty, and highly processed foods for every meal. I stayed up all night and had poor sleep hygiene. I was darn near 300 pounds; tired; sloppy; and constantly out of breath.

In January 2018, after a decade or more of this terrible lifestyle, my body had had enough. I was at work and my co-workers noticed that my skin and eyes had turned a deep shade of yellow. I was so obviously jaundiced that my boss gave me a choice: I could find a ride to the emergency room, or she could call an ambulance. Still in denial, I simply drove to the local urgent care near my house. The doctor there took one look at me and said, “What are you doing here?! You need to go to the emergency room.” Finally, I went to the hospital, where I found out that my liver and kidneys were dying.

Over the course of the next few weeks, multiple doctors told me that there was nothing they could do for me. The only way to save me would be a liver transplant, and most of the doctors there were not willing to risk a perfectly good organ on an addict who would go back to his old lifestyle and waste his life away, again. I was told to get my affairs in order.

But two doctors believed in me, and after eight weeks, they convinced the transplant team to take a chance on me. I was so thankful; healthy organs are extremely hard to come by and there are plenty of deserving candidates other than me. We scheduled the surgery. The transplant day arrived, and not a moment too soon: As they wheeled me into the operating room, my body was crashing. The nurse told my fiancee that if it weren’t for the transplant, I’d die in a matter of hours.

Life After the Liver Transplant

When I awoke from surgery, a deluge of emotions overwhelmed me. I was filled with gratitude and guilt, simultaneously—gratitude for everyone who helped me make it to the other side, and guilt because I had put myself and my family in this situation. Those first 10 seconds after waking up were life-changing.

The road to recovery was a difficult one, to say the least. My stay in the hospital had left me weak. I needed 24-hour care. I could not walk on my own. I could not shower on my own. I could not cook for myself. In my regular conversations with my team of doctors, diet and nutrition were always at the forefront, and they told me that I needed to take care of my new liver by eating well. I followed their dietary recommendations closely the first few months after the liver transplant, but gradually I slipped into eating a more typical American diet—healthier than I’d been eating before the transplant, but still not great.

A year or so after my transplant, I waded into the world of endurance sports, completing a couple half-marathons and a few other races. As I grew more interested in long-distance running, I began reading memoirs by endurance athletes, including Rich Roll and Charlie Engle. They both had similar stories to mine, and both had turned to a plant-based diet for their health and athletic performance. This led me to watch the Forks Over Knives documentary film, which outlined the consequences of a diet rich in meat, dairy, and processed foods. I was shocked to discover just how poorly I’d been eating.

I started trending toward a more plant-based diet over the course of a few months. Then one day, I decided to go 100 percent all-in on the whole-food, plant-based way of eating.

Within days I began experiencing the benefits of a fully WFPB diet. I was sleeping better. My thoughts were clearer. I had more energy and actually wanted to get out and exercise. I started to set goals for myself.

In the year and a half since adopting a WFPB diet, I’ve run five half marathons and one full marathon. I competed in a 100-mile bicycle race (El Tour de Tucson). I’ve hiked more than a dozen mountains and trekked rim to rim at the Grand Canyon. Right now, I’m training for my first triathlon, and I’ve signed up for my first 50-mile ultra-marathon in January. At the root of it all (pardon the pun) is my WFPB lifestyle. I’m able to fuel my body properly before my adventures, and to give it a chance to recover afterward.

Since those first 10 seconds of my second chance at life, I’ve been committed to earning this gift that I have been given. I want to demonstrate this commitment to my doctors, to my family, to the donor’s family, and, most importantly, to myself. Today I help other transplant patients navigate their own health and wellness journeys. I truly believe, in my heart of hearts, that a WFPB diet is the foundation of my success in life after my liver transplant. This turned out to be the best decision I could have made for my health. 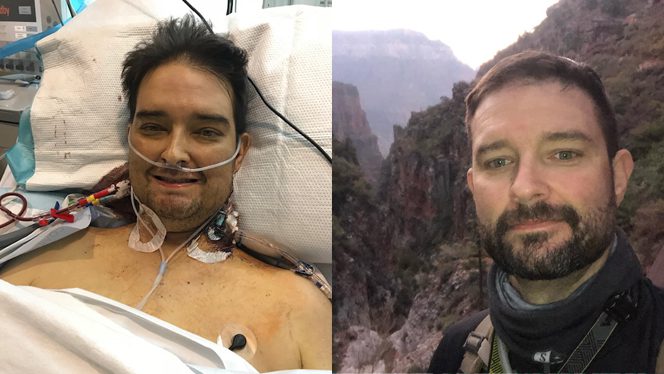 Webinar Replay: The Role of Nutrition in Mental Health and Addiction Recovery with Adam Sud
Aug 20, 2021
Recovering from Liver Disease on a Plant-Based Diet
Apr 21, 2020
At 73, I Went Plant-Based and Said Goodbye to Obesity, Heart Disease, Kidney Disease, and Arthritis
Nov 25, 2019