After a Bypass and a Grim Diagnosis, a WFPB Diet Reversed My Husband’s Heart Disease

In the middle of March 2012, my husband Dale and I watched Forks Over Knives, and halfway through he said to me, “Let’s do this!” I was shocked, because he was a true meat eater and always finished what was on my plate. I had always been curious about eating only plants, so I jumped on it and asked if he was serious. He said he’d give it three months, and we could see how we felt and what our bloodwork said.

At that point, Dale had already undergone an angioplasty and received a stent, followed by both quadruple bypass surgery and then a carotid artery surgery. His surgeon for that last procedure said he was probably days away from a massive hemorrhage and stroke. I was considered pre-diabetic and had cholesterol of 291.

So, by April 1st I had cleaned out all the cupboards and the freezer. All meat, animal-based products, and processed foods were gone from our house. Within a month and a half, we were already convinced we would never go back!!! We both began to drop weight and feel better. But Dale still wanted to see what “the numbers” said.

So at three months we had our blood checked. I’ve never seen a cardiologist giggle before. Dale’s numbers had dropped dramatically, and his cardiologist was speechless. He could only say, ”I’m happy. Whatever you’re doing, keep on doing it.”

Well, three months later, Dale had his carotid ultrasound and found one side clear and the other side 40% blocked. This provided more motivation to stay on the healthy diet. When we told the surgeon that we had begun eating a whole-food, plant-based diet, he said, “Why’d you do that? That’s a lot of work. Well, then, you won’t need me.” Sure enough, ten months later (in August 2013), a year and a half after beginning this lifestyle, the ultrasound showed no significant blockage on either side, and Dale’s weight was down 25 pounds. The vascular surgeon said he had never seen this before. He had read about it, but never seen it.

We told him about Forks Over Knives and The China Study. He said he had read The China Study and was now going to have to see FOK. He said he was going to definitely revisit this approach. He was very excited to see it with his own eyes and told us not to come back for two years — something he NEVER tells a patient!!!

As, for me, I lost 30 pounds, am no longer pre-diabetic, and my cholesterol is normal. 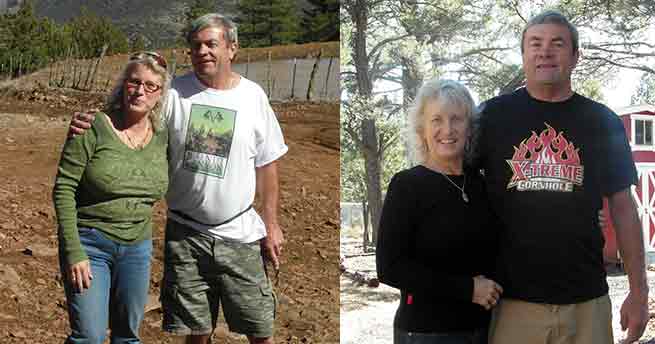