After college, Richard Hubbard headed down a dangerous path of weight gain and hypertension. Plant-based eating helped him reverse course.

My bad eating habits started while I was in college, but it wasn’t until I graduated and started leading a more sedentary life (primarily because of desk jobs) that things got really bad. Eventually, I ended up weighing over 350 pounds. (I stopped weighing myself at 345; I didn’t want to know how heavy I really was.)

I did a lot of “yo-yo” dieting. I tried everything, including cutting carbs. Nothing ever seemed to work. I also exercised, but, of course, you can’t out-exercise a bad diet.

I avoided doctors for years. Diabetes runs in my family, and I did not want to go to the doctor and hear I had it. When I did eventually see a doctor, it was only because my employer’s health insurance required that I get a physical. I am so grateful that I had to get that physical. I hate to think where I’d be today if I hadn’t. It was then that I finally faced my obesity-related problems.

A Life-Changing Proposal
I changed my diet a month or two before the appointment, as I didn’t want to hear that I had diabetes. I managed to get my blood sugar near a normal range, so I wasn’t in danger there, at least. However, I did find out that I had hypertension, and the doctor wanted to put me on medication. I did not want to go down the road of being on medication for the rest of my life. Instead, I made a proposition: If I could lose weight and lower my blood pressure naturally, would he agree that I could delay going on meds? Amazingly, he agreed.

I researched what foods to eat to lower blood pressure. Eventually, this led to watching Forks Over Knives and other documentaries about the benefits of plant-based eating. They changed my life. I read books by Dr. Joel Fuhrman, Dr. T. Colin Campbell, and Dr. Michael Greger, among others, and eventually became convinced that plant-based was the way to go.

All In
I started eating lots of fruits and veggies, though I still ate turkey and eggs. I lost 150 pounds—most of it within a year—but I was unhappy with my loose skin. I figured the way to a tighter body was to eat as healthily as possible, and, in my eyes, that meant giving up all animal products. Then I discovered vegan bodybuilders, such as Robert Cheeke, who were building muscle without consuming animal products. That convinced me.

On Sept. 6, 2016, I became completely plant based. Never before did I build muscle as well as I have since making the switch. I also have a lot of energy and work out five days a week. I attribute my vitality to my clean eating. 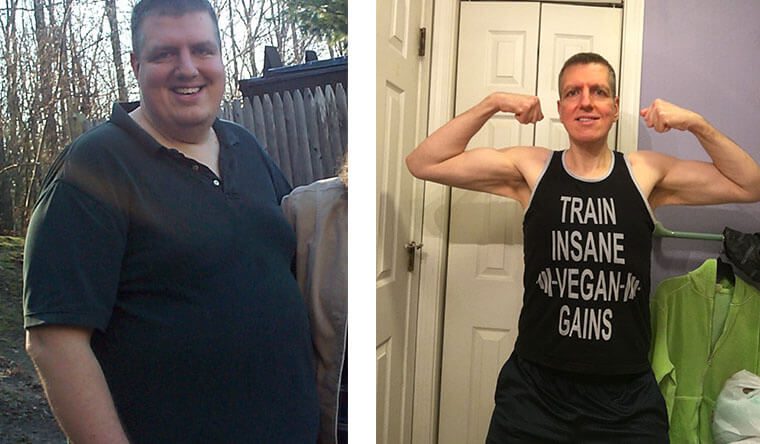