Heart Attack at 67 Led to Diet Changes … Now Off Multiple Meds and Feeling Better Each Day!

Although I appeared in good health, fit, and not overweight, in hindsight I’m not surprised by the heart attack. My uncle and a nephew died from heart disease in their 40s; my younger brother died suddenly in his late 50s; and my youngest brother recently had a heart attack with six bypasses, which resulted in congestive heart failure, poor kidney function, and insulin-dependent type 2 diabetes.

I thought I was doing quite well following the DASH diet, recommended by most “experts.” It allowed me to get my symptoms under control, with the use of three blood-pressure medications (Coreg, novo hydrazide and Micardis), as well as Plavix, Warfarin, Crestor, nitroglycerin patches, nitroglycerin spray, and antidepressants.

Then I watched Forks Over Knives with my wife, in September of 2011. I gradually started moving toward a vegetarian diet after watching the film.

Now, after a year of eating entirely the plant-strong way, my blood tests show very low cholesterol, and my blood pressure is optimal. My doctor took me off eight of my nine medications! He said my bad cholesterol is the lowest he’s ever seen, even after being off Crestor for three months. All I’m taking now is one pill for blood pressure (Micardis), which I’m hoping might eventually be stopped.

Here in Canada, my procedures, including all ambulance use, cost nothing: no co-pay, no limits — except for drugs. I used to pay 25% of the drug cost, which amounted to about $3,000 a year. So, on top of the health benefits I’ve experienced, our household cash flow has improved. In addition, our food costs are greatly reduced: plant-based eating is far less costly than the SAD diet. 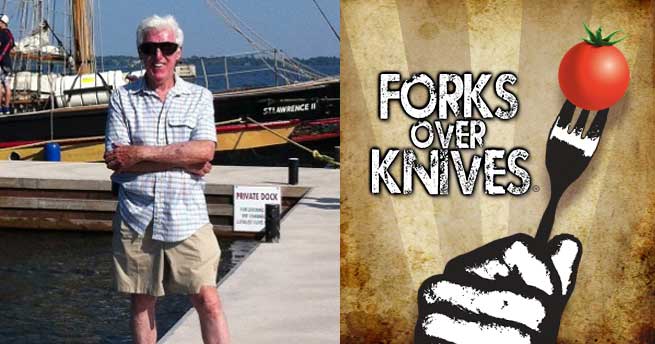