Hashimoto’s disease had rendered life miserable for Rick Avrett. His wife, Rebecca, shares their journey toward better health on a whole-food, plant-based diet.

My husband, Rick, had been taking a statin for over 10 years for high cholesterol and high blood pressure. His parents had serious heart disease, which he inherited. Because of this and my own desire to lose weight, I started to prepare what I thought were healthier foods. We ate no beef and minimal chicken. Our diet consisted mostly of seafood and fresh fruits and vegetables. We never ate anything I considered unhealthy.

Unfortunately, Rick’s cholesterol wouldn’t go below 205, which was not a healthy number with his family history. So, his doctor started him on a new statin. In the spring of 2018, about six weeks after he started his new medicine, Rick began to have leg weakness. His doctor patted him on the back and said that it was just old age. He was 68.

Miserable, Tired, and in Pain 24/7
The situation got progressively worse to where Rick could barely stand up and his legs would give out on him while walking. We thought it was the new statin, so his doctor took him off the drug and ran bloodwork. Nothing showed up.

After a month off the statin, Rick’s situation continued to get worse. He was truly in misery. His work required him to stand on his feet all day, which didn’t help.

In desperation, he reached out to a homeopathic doctor for an alternative approach. We found out from intensive blood work that Rick had Hashimoto’s disease, a condition in which the immune system attacks the thyroid. Hashimoto’s is caused by inflammation. The doctor advised him to remove wheat, gluten, and soy from his diet and sent him home with a bag full of supplements.

He followed the diet and took the supplements for a month but saw very little change. He was miserable, tired, and in pain 24/7. It was beginning to look like there were no answers.

Plant-Based Inspiration from Dad
My 87-year-old father started the WFPB diet nearly 10 years ago. In the fall of 2010, his health had deteriorated to a point that something needed to change or long-term care would be inevitable. He and his wife had each gained 30 pounds, and he was experiencing disabling neck and arthritis pain, putting him in daily traction and on pain medicine. His blood pressure was rising, and he was developing diabetes. That’s when they started to search the web for help and discovered Forks Over Knives. After watching the movie and reading the book, they started the diet. Within 90 days, my father was free of neck and arthritis pain and all signs of high blood pressure and diabetes were gone. He and his wife both lost the excess weight.

My father had been pushing me to try the diet, and although I always knew it was probably a good idea, Rick and I had never been able to stick to it for very long. But by June of 2018, it was obvious Rick was in trouble. He could barely walk, and eczema covered his body. We had spent so much money on alternative medicine and supplements, but nothing was working. That’s when I put my foot down and we started the WFPB diet. It really wasn’t a hard decision to make, since Rick’s health depended on it.

Kitchen Prescription: Finding Forks Meal Planner
I began cooking basic dishes with whole-food, plant-based staple ingredients, such as quinoa and beans. Rick ate what he was served and never complained, but I soon became frustrated. I was bored with just cooking the basics. The meals weren’t very creative. I no longer felt any joy cooking. I actually loathed going into the kitchen, which used to be my “happy place.”

To survive this new journey, I needed to rethink my strategy. I searched the web for WFPB recipes, and that is when I found Forks Meal Planner. It gave me a blueprint to build on and a new enthusiasm for cooking. My goal was to create healthy, compliant meals that made you feel like you were not missing out on anything but carried a positive outcome. I hadn’t known where to start, but Forks Meal Planner took care of that.

You Are What You Eat
Over the next three months, Rick experienced a complete health turnaround. He joined a gym and started going four times a week. The pain started to subside, and the eczema calmed down as well.

At his next doctor’s appointment, Rick’s cholesterol had gone down to 129. His doctor was floored. He was astounded by how significantly Rick’s diet had impacted his health. For Rick, it was quite a role reversal: He got to teach his doctor. The doctor even called his wife and got Rick to talk to her. It was probably one of the best times Rick has ever had in a doctor’s office, as he’d previously always associated doctors’ offices with bad news.

It has been a year since we’ve been eating WFPB, and we now feel a sense of normalcy in our lives. Rick is back to the dancing he loves, and I am a happy girl back in my kitchen.

My go-to breakfast is the Baked Oatmeal Cups (from Forks Meal Planner). They are beyond quick and easy to make. I have a summer garden, so in the summer I have an overabundance of zucchini. That’s when I love making Stuffed Zucchini smothered in a homemade marinara sauce. (Cook’s tip: I have found just about any type of bean works in this recipe.) When I am really craving something hearty, there is nothing better than a hearty black bean burger or veggie enchiladas with salsa verde.

The best reward for me personally has been some weight loss, which had been seemingly impossible for me at the age of 63. Although I didn’t lose as much weight as Rick lost (15 pounds), I’m thrilled to report that I lost 6 pounds without any exercise, and I have kept it off with no effort. I had borderline cholesterol and prediabetes issues: Both have corrected themselves since I started the WFPB diet. I have also found that I don’t tire as easily, which is a plus when trying to keep up with three grandchildren. I just basically feel good, period!

I really thought I was going to end up being a caregiver, but this amazing health transformation caused by our diet change has shown us that you truly are what you eat.

Learn more about Forks Meal Planner and how you can start with your free vegan meal plan. 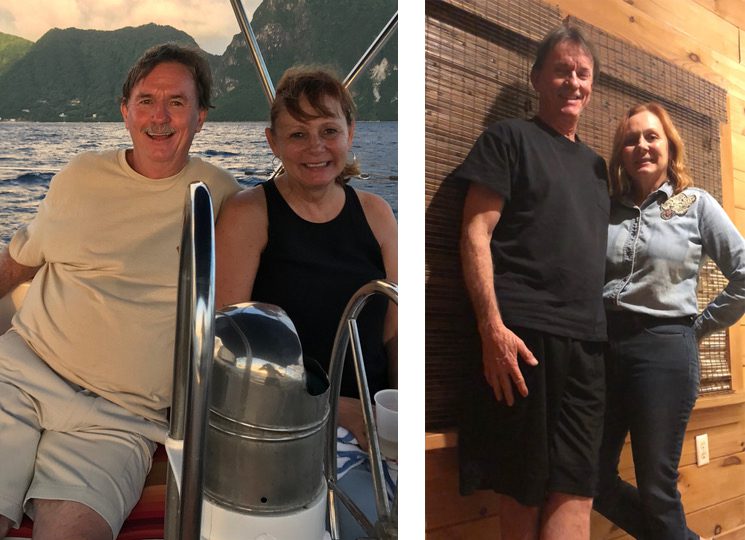