Insulin Resistance Is a Strong Predictor of Disease. Here’s What You Need to Know.

Insulin resistance significantly increases your risk for the development of a collection of health conditions, including type 2 diabetes and heart disease.

What Is Insulin and Why Is It Important?­

Insulin is a hormone that is released by the pancreas in response to rising blood glucose. When you consume carbohydrates, the glucose that enters the bloodstream signals the pancreas to make insulin. Insulin serves as the key that unlocks the door to allow glucose to enter body tissues. It tells your cells “Yoo -hoo! Pick up this glucose. It’s all over the place.”

Without insulin, cells in the liver, muscle, and fat have a difficult time vacuuming up glucose from the blood. These tissues can transport only a small percentage (5 to 10 percent) of the glucos­e in circulation without the help of insulin. When insulin is present, it increases the amount of glucose that can be transported into tissues, allowing them to be properly fed, and keeping blood glucose concentrations in the normal range.

This process of transporting glucose is important because every cell in your body uses glucose for energy. (Besides glucose transport, insulin also escorts amino acids into cells.) 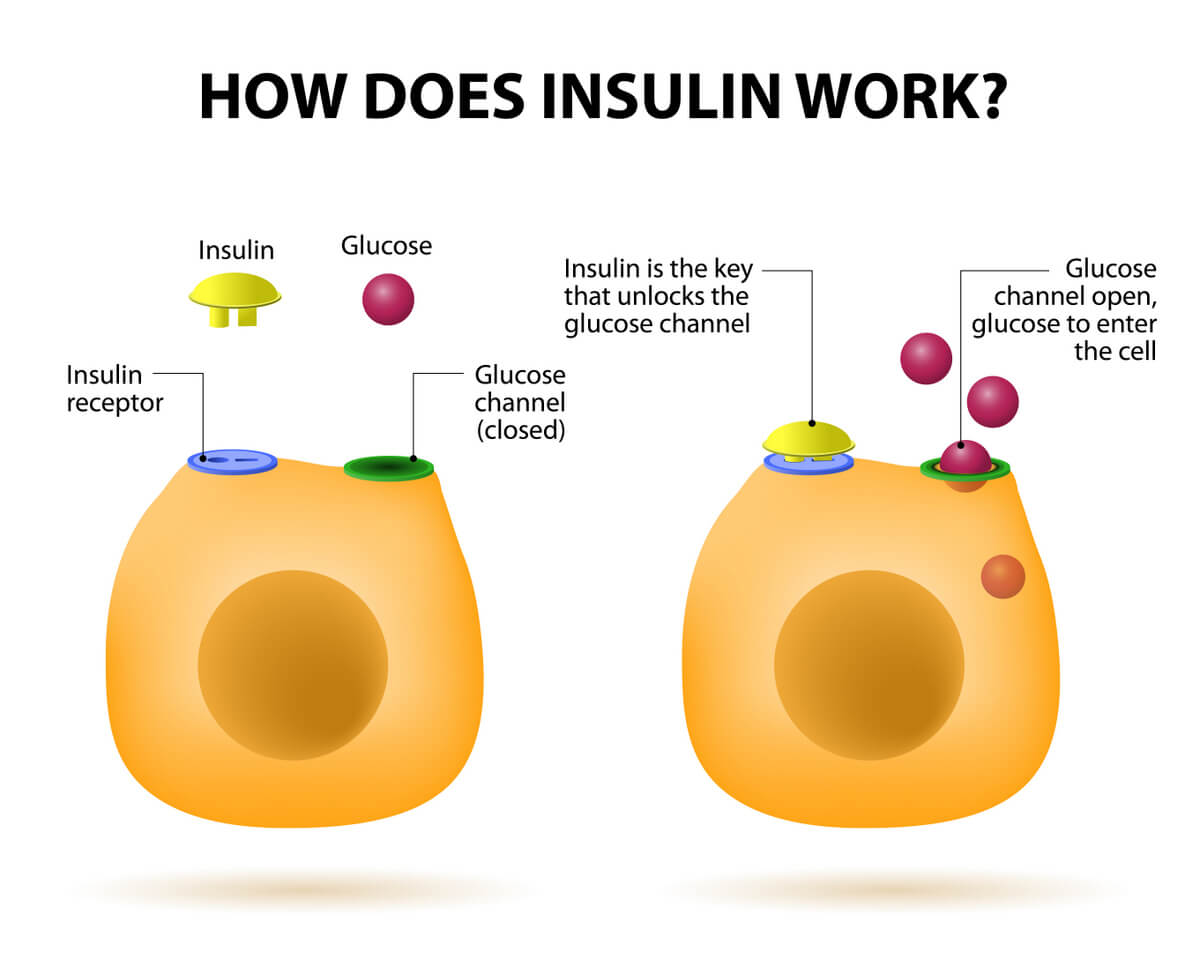 What Is Insulin Resistance and Why Is It Important?

Insulin resistance is a condition in which multiple tissues in the human body become resistant to the effects of insulin. Simply stated, insulin resistance occurs when tissues become “blind” to insulin.

As a result of insulin resistance, the pancreas is forced to secrete increasing amounts of insulin, resulting in a condition known as hyperinsulinemia. Hyperinsulinemia is a dangerous condition for many tissues, simply because elevated insulin concentrations in the blood act as potent signals for cell growth. More insulin means more tissue growth. More tissue growth often results in increased body fat, increased cell replication rates, and a significantly increased risk for cancer. Many studies have now begun to uncover the link between insulin resistance and cancer. One study states the following:

“Insulin resistance is common in individuals with obesity or type 2 diabetes (T2D), in which circulating insulin levels are frequently increased. Recent epidemiological and clinical evidence points to a link between insulin resistance and cancer. The mechanisms for this association are unknown, but hyperinsulinaemia (a hallmark of insulin resistance) and the increase in bioavailable insulin-like growth factor I (IGF-I) appear to have a role in tumor initiation and progression in insulin-resistant patients (1).”

How Much Do Scientists Know About the Causes of Insulin Resistance?

There is a significant amount of confusion about what actually causes insulin resistance, and I witness it every day in my work coaching people with diabetes as well as in my career as a research scientist.

A large gap exists between the scientific research on insulin resistance and what the general public understands about it. Most health professionals even misunderstand the science or are not aware of the latest research. Unfortunately, excellent research does no good if the information is not put in the hands of those who need it. This is certainly the case with insulin resistance.

This gap exists for a number of reasons and is heavily influenced by economic forces that profit on lifelong health conditions like diabetes. You may have heard the phrase “there is no money in the cure.” This is a true statement, and this practice is what keeps life-saving information out of the hands of those who need it.

The Major Cause of Insulin Resistance = Lipid Overload

Researchers debate the causal mechanisms of insulin resistance tirelessly, day after day, and travel thousands of miles to attend large conferences to flex their scientific muscles. They propose every mechanism you can imagine, and blame every tissue you can think of, from the pancreas to the muscle to the liver to the brain to your blood. 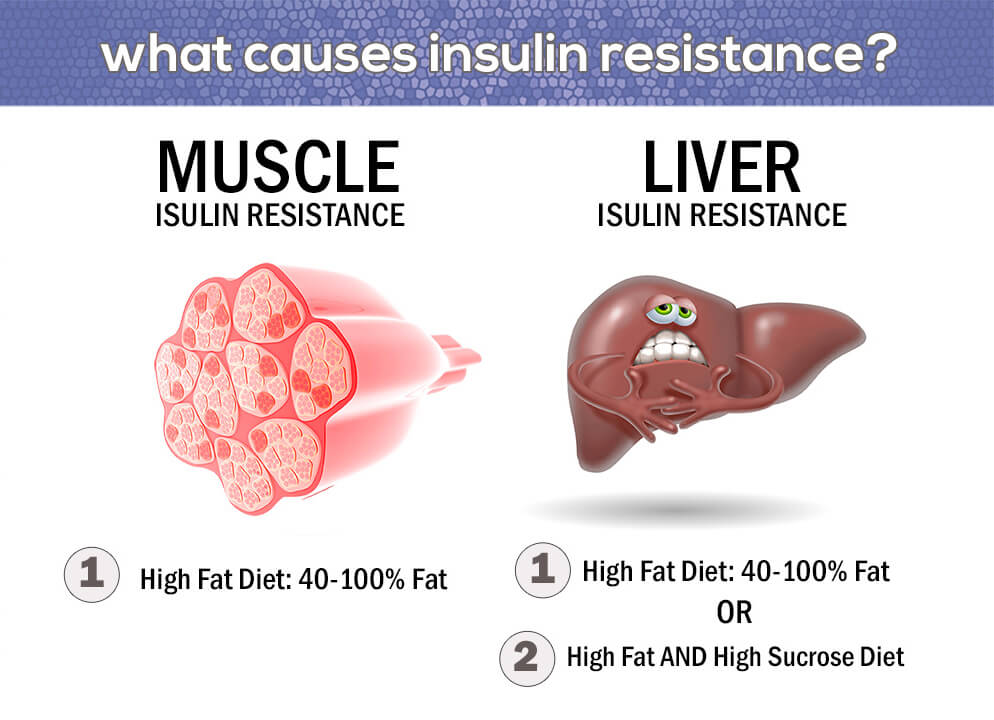 Researchers have shed light on the ability of excess fatty acids (dietary or structural, meaning body fat) to induce low-grade inflammation, which acts as an initial step in a series of events leading to damaged blood vessels, liver disease, heart disease and hypertension:

“Elevated free fatty acid levels (due to obesity or to high-fat feeding) cause insulin resistance in skeletal muscle and liver, which contributes to the development of type 2 diabetes mellitus (T2DM), and produce low-grade inflammation, which contributes to the development of atherosclerotic vascular diseases and NAFLD (non-alcoholic fatty liver disease)(6).”

Too often, we blame carbohydrates for insulin resistance, despite significant evidence that excessive fat consumption results in excessive fat storage.

High concentrations of saturated fatty acids are found in the following animal foods:

In addition, high concentrations of saturated fats are found in some plant foods like coconut-derived products (including coconut meat, milk, cream, butter, and oil).

Some of the direct detrimental effects of saturated fatty acid intake on muscle and liver tissue include:

Other Causes of Insulin Resistance

Besides dietary fat, insulin resistance is also affected by a diet filled with a lot of highly processed foods. This includes candy, donuts, many packaged goods, and frozen pre-made meals. To improve insulin sensitivity, aim to eat whole plant foods, which come with a host of vitamins, minerals, antioxidants, phytonutrients, fiber, and water. These foods have untold health benefits, and are required for optimal health, athletic performance, athletic recovery, and protection against lipid overload.

Insufficient exercise is also a cause of insulin resistance. Exercise stimulates the muscle tissue to burn stored fat and to accept glucose from the blood. Adopting a regular exercise regimen is effective in improving insulin sensitivity.

It is important to recognize that insulin resistance affects everyone, even those who show no symptoms of high blood sugar. In order to ensure that you remain insulin sensitive, regardless of your current health status (diabetic or nondiabetic), follow these three steps:

Our Most-Shared Success Stories of 2019
December 30, 2019
How Erectile Dysfunction Can Save a Life (and Be Reversed)
September 20, 2019
Going Plant-Based Gave Me Back My Energy and Reversed My Mom’s Diabetes
September 12, 2019

Cyrus Khambatta received his PhD in nutritional biochemistry from the University of California at Berkeley. He started Mangoman Nutrition and Fitness in 2013 to teach people with diabetes how to measure, track, and reverse insulin resistance through plant-based nutrition and strategic exercise. Through nutrition education, exercise coaching, and his personal experience as a person with type 1 diabetes, he positively influences the lives of people with both type 1 and type 2 diabetes around the world. For more information, visit mangomannutrition.com.