What Are Leeks? How to Clean, Cut, and Cook Them

Leeks straddle the line between aromatic and fresh vegetables, with the seasoning qualities of “the gourmet’s onion” (a well-earned nickname) and the delicate flavor and texture of “the poor man’s asparagus” (another nickname). Plus they’re a member of the onion family that won’t make you cry! Read on for everything you need to know about selecting, storing, prepping, and cooking leeks.

Leeks belong to the allium family along with garlic, shallots, and all types of onions. The sharp flavor of raw leeks turns sweet and mellow when they’re cooked—so sweet and mellow, in fact, that they can be eaten on their own, like a vegetable. Leeks can be used interchangeably with onions in most recipes for soups, casseroles, and stews to add a subtle, more complex flavor.

Leeks have been a favorite in cuisines around the world for thousands of years. Ancient Egyptian tomb paintings feature leeks among harvest vegetables. The Chinese have long attributed medicinal properties to the vegetable, and “jiu,” the Chinese character for leek, sounds like the word for longevity. Leeks have also been the national emblem of Wales since the 6th century, when, according to legend, St. David’s troops outwitted Saxon invaders while wearing leek leaves in their helmets.

With their long leaves and cylindrical shape, leeks look a lot like giant scallions, aka green onions. But the similarity ends there. Scallions are tender and mild when raw, and have thin, tubular leaves like other onions. Leeks’ thick, flat leaves and dense layers are strong-flavored and fibrous, which means they require cooking or very fine chopping to tame their texture and pungency.

Leeks have a similar nutritional profile to their oniony cousins, but they boast more vitamins and minerals. They are an excellent source of vitamin A, vitamin C, and folate. Leeks are also high in vitamin K, a nutrient usually associated with dark, leafy greens.

Most recipes call for the white and light green parts of the long root vegetable, so look for lots of white at the base when shopping for leeks. Tight tops mean the leaves underneath will be tender and light green, giving you more leek for your buck. Choose small to medium leeks with no signs of wilting or yellowing leaves.

Leeks are at their sweetest, tenderest best in the spring, fall, and early winter, when temperatures are cool and humidity is high. Wrapped in a kitchen towel, they will keep up to two weeks in the crisper drawer of the fridge. You can also freeze sliced raw leeks in freezer-safe zip-top bags for easy use in soups and stews.

How to Prepare and Cook Leeks

Whether you’re using them whole, halved, or thinly sliced, leeks need a thorough rinse beforehand. That’s because sand and dirt get caught between leeks’ leafy layers as they grow upward in the field. It’s easier to get rid of the grit after the leeks have been cut (more on that below). Then it’s just a matter of adding them to a chosen recipe or sautéing them on their own:

When leeks are sliced or chopped, they can be used in place of onions or shallots in soups, stews, and casseroles. You can also showcase their subtle, sweet flavor in pasta dishes like our Red Lentil Rotini with Silken Leeks and Shiitakes or Vegan Penne with Artichokes, Leeks, and Lentils. Here’s how to prep and clean leeks before slicing them:

1. Trim away the root end and any tough outer green leaves. Halve each leek lengthwise. You can roughly chop those halves into shorter lengths. Or, to slice, start from the smooth white end and slice the leek crosswise to desired thickness. As you move up the stalks, pull away the thick outer green leaves to continue slicing the pale green parts.

2. Transfer chopped or sliced leeks to a large bowl of cold water, and swish around to separate the pieces and rinse away any grit. Drain in a sieve or colander.

Leeks get their nickname ‘the poor man’s asparagus’ because they make a delicious vegetable side dish when cooked halved or whole. Grill or roast halved (lengthwise) or whole leeks at 375˚F for 30 minutes. Braise or steam whole leeks on the stovetop until soft and tender. Serve warm or at room temperature with your favorite sauce or vinaigrette. You can also cut whole leeks into chunks and add them to hearty stews and roasted vegetable medleys. Try adding 1 whole leek, cut into chunks, to Cathy Fisher’s Best-Ever Beefless Stew (at the same time as the potatoes).

The trick to prepping halved or whole leeks is to keep part of the base intact so that the layers don’t separate, like this:

1. Trim away the stringy roots, without completely cutting off the root end. Trim or pull away any tough green leaves. Halve each leek lengthwise. For whole leeks, leave at least 1 inch of the base intact and halve the upper part where the leaves begin to separate and turn green.

2. Rinse each leek half under cold running water, gently pulling the layers apart to rinse away any accumulated grit. Shake dry.

5 Things to Do with Melted Leeks

Melted leeks (aka sautéed leeks) are easy to make: Simply water-sauté sliced leeks in a covered skillet for 10 to 15 minutes, or until tender. Serve them as a side dish on their own, or add them to:

How to Use the Dark-Green Outer Leaves

Most recipes call for the white and pale green parts of leeks, but the dark outer greens are equally delicious in stews, sautés, and pasta and grain dishes. In French cuisine, leek leaves are used to season broths, soups, and stews as part of a bouquet garni. The next time you cook with leeks, set aside or freeze the green outer leaves to season brothy recipes and pasta and grain cooking water the way you’d use a bay leaf or any other fresh herb, then remove the leek leaf before serving.

Our Favorite Recipes With Leeks 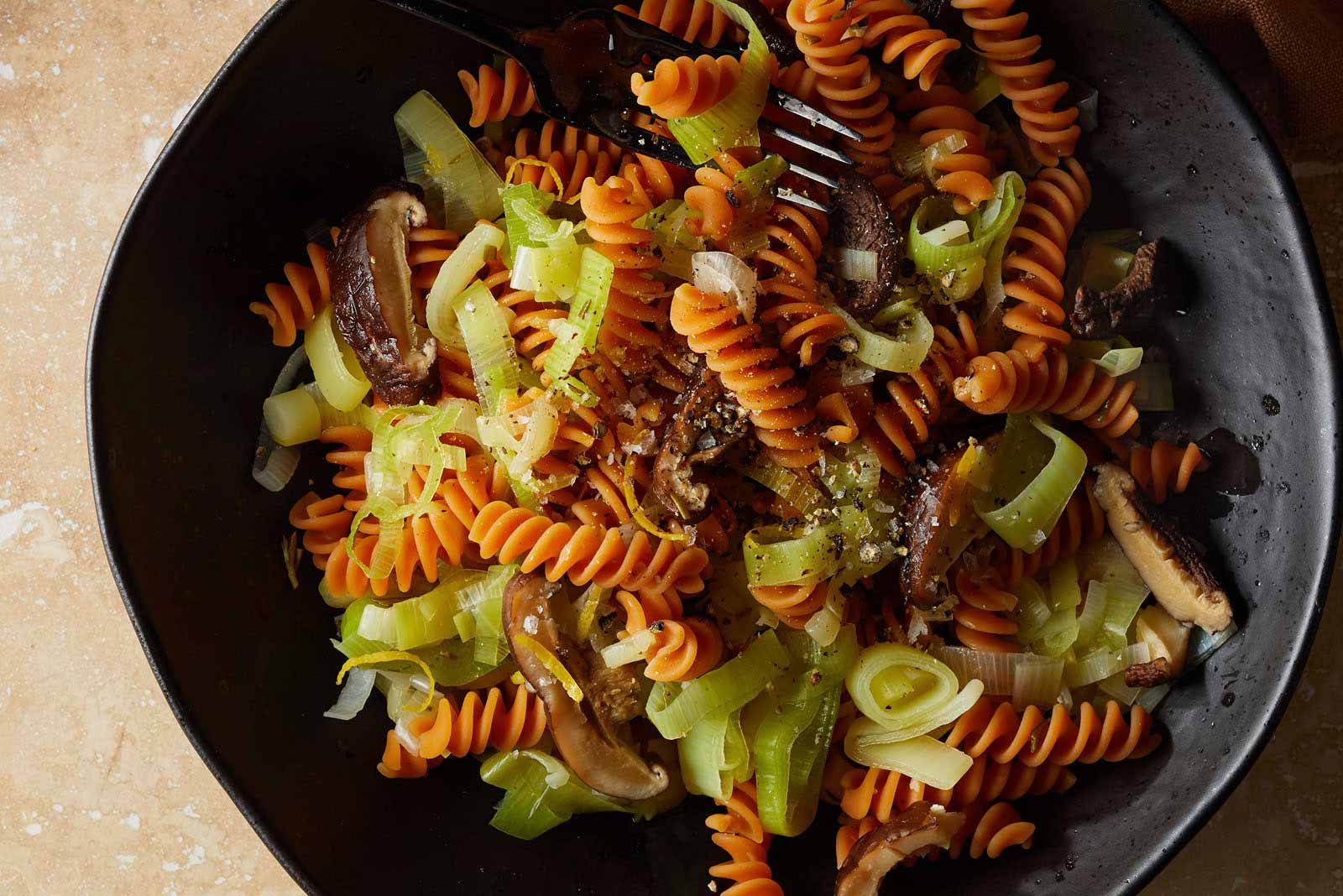 Now that you know how to select, wash, and prep leeks, get cooking with these healthy and delicious leek recipes from Forks Over Knives.