Irritable Bowel Syndrome: What to Know About IBS

Irritable bowel syndrome (IBS) affects as many as 45 million people in the United States. It is the most common diagnosis in gastroenterology practices: 1 out of 3 patients seen are suffering from IBS. More people miss work as a result of irritable bowel syndrome than any other reason other than the common cold. In this article, we’ll review the symptoms of IBS and the scientific research regarding IBS and diet. 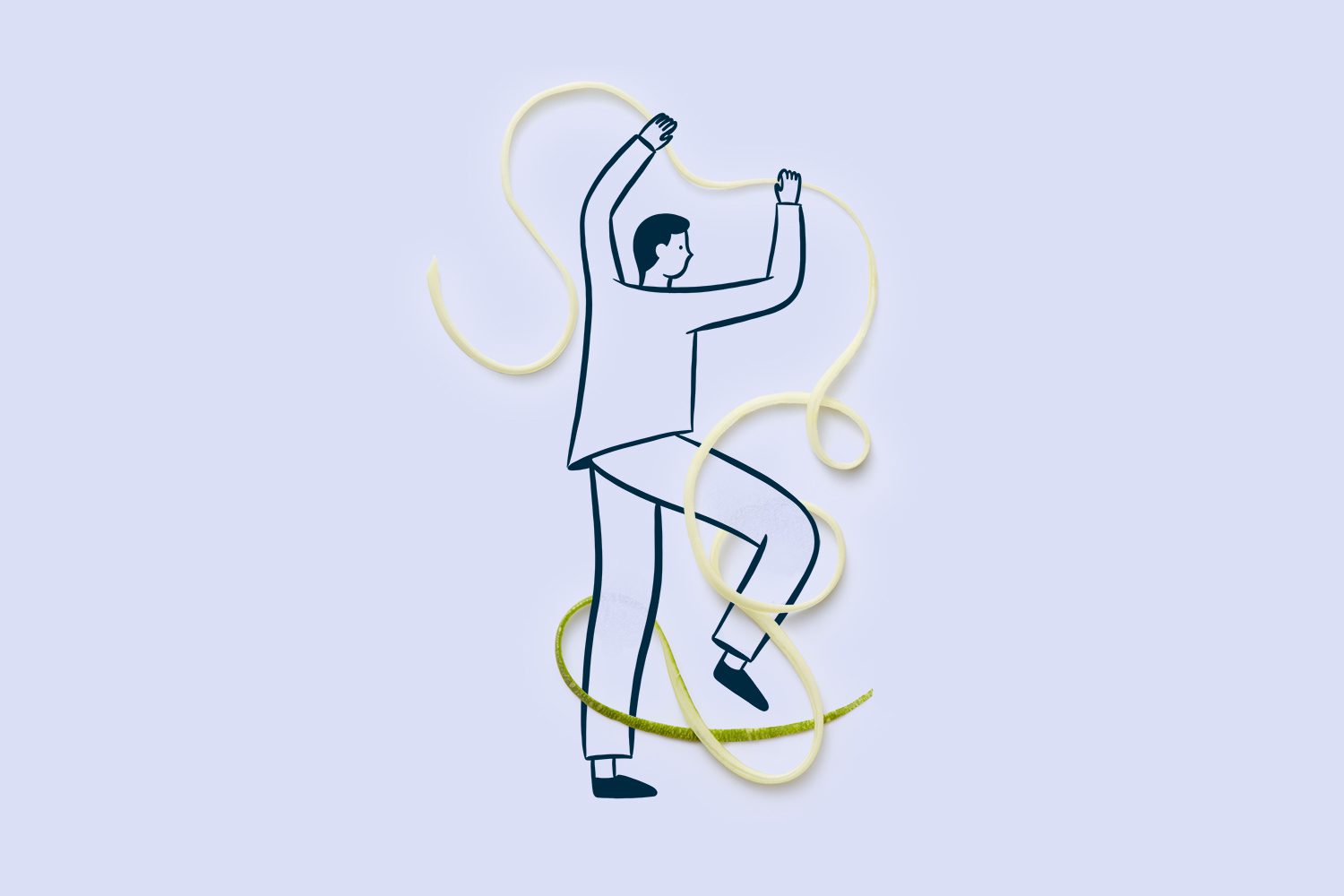 What Is Irritable Bowel Syndrome?

IBS is a chronic condition that affects the large intestine, causing symptoms that range from mild to debilitating. It is considered a functional bowel disorder, which means the problem isn’t with the structure of the bowels; it’s with how they work. Because symptoms are present without any visible signs of damage to the digestive tract, it is not diagnosed through testing such as blood tests, X-rays, or endoscopy. Doctors may order tests to rule out other digestive problems, such as celiac disease, but IBS is not a diagnosis of exclusion. Instead, diagnosis is made using a well-accepted set diagnostic criteria called the Rome criteria.

According to the Rome criteria, to be diagnosed with IBS, a patient should have abdominal pain and discomfort lasting on average at least one day a week for the last three months. The pain or discomfort should be related to defecation, associated with a change in frequency of bowel movements, and/or associated with a change in stool consistency. Other symptoms of IBS can include bloating, gas, passage of mucus, straining, urgency, or a feeling of incomplete evacuation.

The exact cause of IBS is not known, though we know at the root is a disturbance in the interaction between the gut, brain, and nervous system. “There are millions of neurons in our gut, and the gut and brain are talking to each other all the time through the vagus nerve,” says Dr. Sarina Pasricha, MD, MSCR, a gastroenterologist specializing in gut motility. “The gut, the brain, and the nervous system are like three legs of a stool. If one part is not working properly, the whole thing weakens and falls apart.”

Two of the biggest factors behind IBS are gut dysbiosis, an imbalance of the bacteria in the GI tract, and stress and anxiety. Studies show that people with IBS have unusually sensitive nerve endings in the GI system and are prone to feeling more intense pain at lower thresholds. This can lead symptoms to flare up in conditions—dealing with a stressful situation or even simply eating a meal—that would not trigger symptoms in those without IBS.

“The first thing I usually recommend to my patients is cutting out dairy,” says Pasricha. “Dairy for most people is quite inflammatory. With just that switch alone my patients will have symptom improvement.” Other common triggers include consuming large meals, high-fat meals, caffeine, alcohol, and carbonated drinks.

It can be helpful for patients with IBS to keep a food diary to uncover their personal food triggers. However, it is important to not jump to conclusions, because foods aren’t the only triggers. “Patients with IBS may be able to eat one food item one day and not have an issue, but the exact same food item on a different day will create an issue,” says Pasricha. “That’s where environment and stress play a role as triggers. It is always worth reintroducing and retrying foods to see if it’s the food or that environment—like eating too quickly that day—causing the issue.”

It is often recommended for people to try a diet low in certain carbohydrates called FODMAPs (fermentable oligosaccharides, disaccharides, monosaccharides, and polyols). FODMAPs are found in dairy products and certain grains, vegetables, and fruits. However, since so many healthy plant foods fall into the FODMAP category, totally cutting them out—while it may reduce symptoms in the short term—will lower the number of healthy microbes in the gut, increase the number of unhealthy ones, and leave you worse off in the long term, says Pasricha.

“When necessary, the low-FODMAP diet can help reset the gut microbiome, but I only recommend this for 4 to 6 weeks and only for the most severe cases of IBS,” says Pasricha. “After that it is really important that you slowly try to incorporate FODMAPS back into the diet in order to provide the right type of food for your gut microbiome.”

For severe cases of IBS, Pasricha recommends working with a plant-based dietitian.

Is the Paleo Diet Good for Gut Health? We Finally Have an Answer

A whole-food, plant-based diet improves the gut microbiome, which can improve IBS symptoms. “I always recommend a whole-food, plant-based diet for my patients and counsel them that the more variety you can eat in fruits and vegetables, the healthier the gut microbiome will be,” says Pasricha. In 2018, the American Gut Project released the largest study of the microbiome to date and found that subjects who ate more than 30 different types of plants (including whole grains) in a week had significantly healthier gut microbiomes compared with those who ate 10 or fewer types of plants each week, with more beneficial gut microbes and fewer harmful microbes.

Studies show that compared with people eating an animal-based diet, a plant-based diet increases microbiota diversity in part because it provides more fiber. Fiber is considered a first-line therapy in treatment recommendations for patients with IBS, according to the 2021 American College of Gastroenterology clinical guidelines. “A whole-food, plant-based diet that is rich in fiber helps to produce short chain fatty acids, which is the key to building a robust gut microbiome,” says Pasricha. Fiber adds bulk to stool, speeds up its transit through the colon, and can help regulate bowel movements. A 2018 study found that the more fiber participants consumed, the less likely they were to have IBS. Soluble fiber—found beans, oats, lentils, and certain fruits—may serve as a prebiotic, feeding beneficial bacteria in the gut. Research suggests that insoluble fiber, the “roughage” that whole grains and vegetables tend to be rich in, has a laxative effect that can relieve constipation.

However, most people with IBS will need to go slowly when beginning a plant-based diet. “I always tell my patients not to go from 0 to 100 really quickly,” says Pasricha. “It’s OK to go gradually, to slowly increase fiber intake and slowly transition to a whole-food, plant-based diet, especially if they experience gas and bloating to begin with. It’s important to counsel our patients that when they are transitioning to a whole-food, plant-based diet they might experience some worsening of their gas and bloating. That is expected. It is not harmful.” As noted above (see “Trigger Foods”), it’s important to keep an open mind and remember that it’s not always food causing the issue. “People will have a symptom when eating an apple or broccoli and assume it’s the food, but it doesn’t mean they have to eliminate it permanently,” says Pasricha. “They need to retry those foods again.”

While a change in diet is the first powerful step in alleviating symptoms of IBS, studies have found improvements with a range of lifestyle strategies including exercise, yoga, stress reduction, biofeedback, and psychological therapies such as cognitive behavioral therapy. “IBS requires a multifactorial approach to treatment and management,” says Pasricha. “Mind, body, soul, and gut health care are all important.”

For people suffering from more severe IBS, treatment may include prescription antispasmodic or antidiarrheal medications, or low-dose antidepressants. “The last resort is medication,” says Pasricha. “We don’t want our patients to be on medications lifelong if they don’t need to be. After transitioning to a whole-food, plant-based diet and making lifestyle changes, many of my patients are able to decrease the dose of medications or come off of them entirely.”