Sale ends in 3 days!Save 20% on Any Forks Meal Planner Subscription!

Men who eat a large amount of ultra-processed foods are 29% more likely to develop colorectal cancer compared to those who don’t, says a new study published in The BMJ. And while heavily processed foods may spike cancer risk for men, the same correlation wasn’t found amongst women.

The August 2022 study analyzed data from three major surveys of healthcare professionals conducted between 1986 and 2015, including the Nurses’ Health Study I and II and the Health Professionals Follow-Up Study. Participants completed questionnaires at baseline and every two years thereafter to gather information on their eating habits, lifestyle, cancer diagnoses, and demographics. After excluding those with incomplete responses or a previous cancer diagnosis, the new analysis included 159,907 women and 46,341 men.

Participants were then divided into quintiles based on their consumption of ultra-processed foods—ranging from the lowest intake to the highest—and researchers adjusted for race, family cancer history, smoking status, physical fitness, and menopausal status. Their findings: Men in the highest fifth of processed-food consumption were 29% more likely to develop colorectal cancer than men in the lowest fifth. Among the women participants, no association was observed between overall ultra-processed food consumption and risk of colorectal cancer.

Why the Gender Gap?

The study authors theorized that the differing patterns of cancer risk among men and women might be related to obesity and sex hormones.

Another possible explanation researchers offered involves the nutritional makeup of the specific types of ultra-processed foods that men and women consumed. Processed meat, poultry, and fish-based ready-to-eat products and sweetened beverages were associated with a higher risk in men.

Among women participants, however, the authors noted that relatively healthier food choices may have been made within the highly processed category of yogurt and dairy-based desserts, “and thus the protective effects (for example, due to higher calcium contents) may overweigh the harmful effects (for example, due to higher sugar contents),” they explained.

Why Are Ultra-Processed Foods Bad for the Colon?

This new evidence adds to a long-established concern about the damaging effects of ultra-processed foods on human health. Dozens of prior studies have shown these products—which are heavily modified with added sugar, salt, and fat—increase the risk of diabetes, cardiovascular disease, irritable bowel syndrome, and obesity.

“We started out thinking that colorectal cancer could be the cancer most impacted by diet compared to other cancer types,” said Lu Wang, the study’s lead author and a postdoctoral fellow at the Gerald J. and Dorothy R. Friedman School of Nutrition Science and Policy at Tufts University. “Processed meats, most of which fall into the category of ultra-processed foods, are a strong risk factor for colorectal cancer. Ultra-processed foods are also high in added sugars and low in fiber, which contribute to weight gain and obesity, and obesity is an established risk factor for colorectal cancer.”

The study authors also explain that beyond the poor nutritional makeup of ultra-processed foods, these products often contain additives—such as dietary emulsifiers and artificial sweeteners—that can inflame the gut microbiome and lead to the growth of cancerous polyps in the colon.

“Ultra-processed foods may also contain contaminants that migrate from plastic packaging, such as bisphenol A, which the European Chemicals Agency judges to be ‘a substance of very high concern,’” the study authors noted.

Colorectal cancer is the third-most diagnosed cancer worldwide and claims more than 900,000 lives every year. 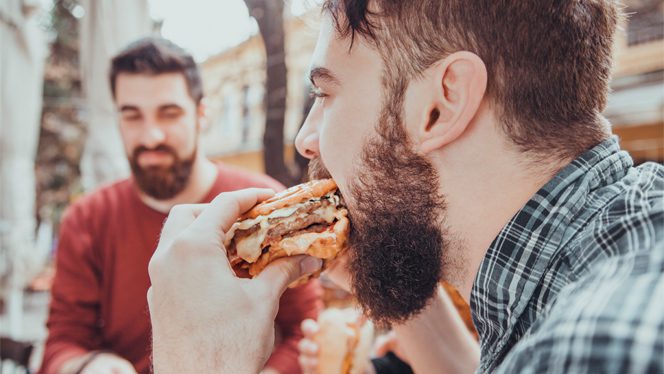 The No-Nonsense Guide to Antioxidants: Facts and Myths Explained
Sep 28, 2022
5 Years After a Stage 4 Cancer Diagnosis, My Mom Is Thriving on a Plant-Based Diet
Sep 20, 2022
Huge New Study Finds Healthy Foods Are Better for the Environment
Aug 24, 2022