Extreme Nutrition: The Diet of Eskimos*

The carnivorous diet of traditional Eskimo inhabitants of the frozen, northern, circumpolar regions of planet Earth (Siberia, Alaska, Canada, and Greenland), serves as a testament to the strengths and adaptability of the human species. The foods consumed by these hardy people are in “polar” opposition to those recommended by me (the McDougall Diet of starches, vegetables, and fruits): a carnivore vs. an herbivore diet. Unfortunately, misinformation surrounding the all-meat diet of the Eskimo has promoted dangerous eating habits to the modern-day general public.

For more than 6,000 years, natives of the frozen North have lived with almost no contact with the rest of the world. Not until the mid-1800s were reliable records made of their daily lives, their diets, and their health. Early reports describe these people as looking beautiful and athletic when they were young, but then they aged quickly, and “men and women who appeared to be 60 or over were rare.”

Rumors have since circulated that traditional Eskimos have lived free of heart disease, cancer, and most other chronic diseases affecting western civilizations these days. Research published in the mid-1970s tried to explain this “Eskimo paradox” of living healthy with very few plant foods, on a high-fat, high-cholesterol, no-dietary-fiber diet. The omega-3 fish fats were noted as the miracle ingredient providing protection. Dietetic and medical experts have uncritically accepted this theory in the face of libraries filled with incriminating evidence to the contrary. They tell patients to eat more fish, poultry, and even red meat—like the Eskimos – and plenty of fish oil – in order to stay healthy.

Hunted animals, including birds, caribou, seals, walrus, polar bears, whales, and fish provided all the nutrition for the Eskimos for at least 10 months of the year. And in the summer season people gathered a few plant foods such as berries, grasses, tubers, roots, stems, and seaweeds. Frozen snow-covered lands were unfit for the cultivation of plants. Animal flesh was, by necessity, the only food available most of the time.

The fat, not the protein, from animal foods provided most of the 3,100 calories required daily for these active people. Plants are the primary source of all carbohydrates, including digestible sugars and non-digestible dietary fibers. Eating raw meat indirectly provided Eskimos with enough carbohydrates in the form of glycogen (found in the muscles and liver of animals) to meet their necessary nutrient requirements and keep them out of a starvation condition called ketosis. Muscle tissue contains almost no calcium, and as a result the daily intake was about 120 mg/day versus the 800 mg and more commonly recommended for good health. Plants (not people) synthesize Vitamin C, yet the Eskimo was able to avoid scurvy with the 30 mg of vitamin C consumed daily found in land and sea animals. Recommendations for vitamin C are 60 mg/day and higher daily. Low levels of sunlight, and preformed vitamin D from fish, met the “sunshine D vitamin” requirement for Eskimo health. By the grace of environmental design, Nature made sure there was just enough nutrition for the Eskimo to survive. 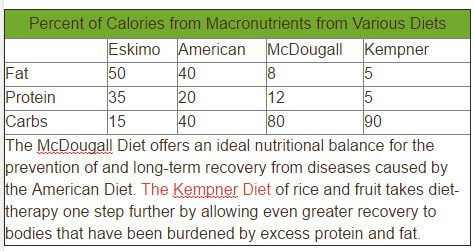 There Is No Eskimo Paradox

The human being is designed to thrive on a diet of starches, vegetables and fruits. The Eskimo experience serves as a testament to the miraculous strengths and adaptability of our bodies. We can survive on raw and cooked meat, but we thrive on starches, vegetables and fruits. These hardy people survived living at the edge of the nutritional envelope, but not in good health. Here are some of the health costs they paid:

Claims that Eskimos were free of heart (artery) disease are untrue. A thorough review of the evidence concludes that “Eskimos have a similar prevalence of CAD (coronary artery disease) as non-Eskimo populations, they have excessive mortality due to cerebrovascular strokes, their overall mortality is twice as high as that of non-Eskimo populations, and their life expectancy is approximately 10 years shorter than the Danish population.”

Mummified remains of Eskimos dating back 2,000 years have shown extensive hardening of the arteries throughout their brains, hearts and limbs; as a direct consequence of following a carnivorous diet of birds, caribou, seals, walrus, polar bears, whales, and fish. The June 1987 issue of National Geographic magazine carried an article about two Eskimo women, one in her twenties and the other in her forties, frozen for five centuries in a tomb of ice. When discovered and medically examined they both showed signs of severe osteoporosis and also suffered extensive atherosclerosis, “probably the result of a heavy diet of whale and seal blubber.”

Their low-calcium diet and lack of sunshine (vitamin D) are only minor factors contributing to the extensive osteoporosis found in recent and ancient Eskimos. Alaskan Eskimos older than age 40 have been found to have a 10% to 15% greater deficit in bone mineral density compared to Caucasians in the US. This research published in 1974 on 107 elderly people concluded, “Aging bone loss, which occurs in many populations, has an earlier onset and greater intensity in the Eskimos. Nutritional factors of high protein, high nitrogen, high phosphorus, and low calcium intakes maybe implicated.”

Protein, and especially animal protein, consumed in excess of our needs places serious burdens on the body. The liver and kidneys work hard to process the excess protein and excrete its byproducts along with the urine. As a result of this extra work, Eskimos have been reported to have an enlarged liver while living on meat, and to produce larger than average volumes of urine in order to excrete the byproducts of protein metabolism. The bones also play a role in managing excess animal protein (acidic by nature) by neutralizing large amounts of dietary acids. In this process bone structure and bone mineral content are lost through the kidney system, depleting the bones into a condition called osteoporosis.

Diseases of animals are readily transmitted to humans when eaten. One example is trichinosis (an infection with the roundworm Trichinella spiralis), which is found in about 12% of older Eskimos; a result of eating raw and infected walrus, seal, and polar bear meat. In most cases this parasite infestation causes no symptoms, but illness and death can result.

Since the 1970s the diet of the Eskimo has contained high levels of toxic, organic pollutants and heavy metals. These lipophilic chemicals are attracted to and concentrated in the fatty-tissues of land and sea animals. As a direct result of the traditional Eskimo diet (now contaminated by industry wastes), the bodies of these Arctic people contain the highest human concentrations of environmental chemicals found anywhere on Earth: “levels so extreme that the breast milk and tissues of some Greenlanders could be classified as hazardous waste.” Eskimo women have been found to have levels of PCBs in their breast milk five to ten times higher than women in southern Canada. These chemicals cause and promote many forms of cancer and cause brain diseases, including Parkinson’s disease.

Nutrition Has Gone Downhill for the Eskimo

The notion that consuming meat, fish, and fish oil will promote health and healing has captured the attention of the scientific community in large part because of the misinterpretation** of the Eskimo experience. But life has gotten worse for the Eskimo. Over the past 50 years their traditional diet has been further modified with the addition of western foods. Rather than using a hook, spear, or club to catch their meal, as in the past, people living in this part of the world use the “green lure” (the dollar bill) and catch their meals through an open car window at the local fast-food restaurant. Obesity, type-2 diabetes, tooth decay, and cancers of the breast, prostate, and colon have been added to the Eskimo’s traditional health problems of artery disease, bone loss, and infectious diseases.

People living in the frozen north these days have heated homes and drive around in comfortable SUVs. The challenging environment their ancestors barely survived through required a carnivorous diet. Those days of needing 3100 calories a day to counter the freezing cold and hunt for dinner are gone. The idea that current epidemics of obesity and sickness in these Northern people would be best fixed by returning to the old ways of carnivorous diet would not work unless they also returned to living in igloo homes and hunted their lands for every meal. Physicians and dietitians now caring for these people suffering from the western diet with the addition of too much traditional food (ancestral meat) should be prescribing a starch-based diet to help them lose excess weight and cure common dietary diseases.

*The term “Eskimo” comes from a Native American word that may have meant “eater of raw meat.” The word “Eskimo” has come to be considered offensive, especially in Canada. Many prefer the name “Inuit,” which means “the people” or “real people.” However, “Eskimo” is the term used in the scientific and historical literature and will be used here.

**Misinterpretation is easy to spread because:

1) People love to hear good news about their bad habits.

2) Nutritional “facts,” even when false and harmful, are used to sell meat, fish, and other foods.

3) The media loves headlines that sell their products, like “The Eskimo Diet proves Meat’s Good.”

Feature photo source: My Life with the Eskimo by Vilhjalmur Stefansson. 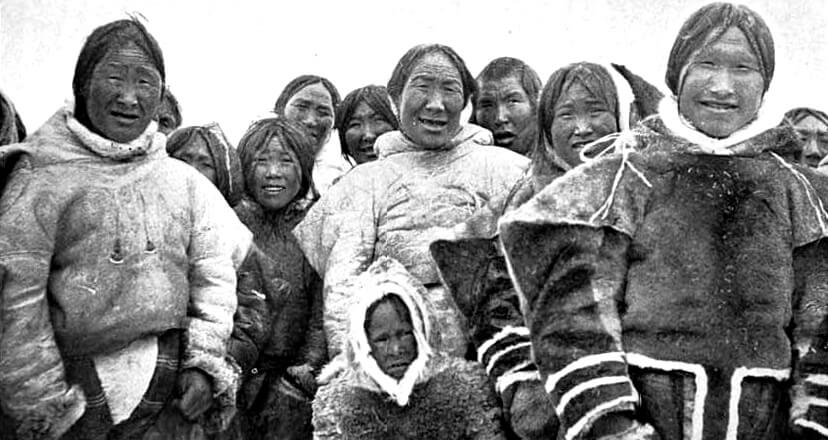