Animal Agriculture, Hunger, and How to Feed a Growing Global Population: Part One of Two 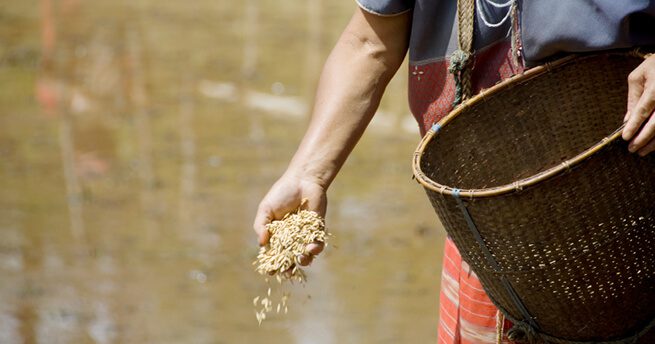 More than 870 million people in world suffer daily from hunger. This year alone, six million children will die from starvation. One third of all hunger victims can be found in developed countries, primarily a factor of poverty, as is the case with 50 million Americans. But the destructive forces of hunger often can be most complicated in developing countries where the other two thirds affected by hunger struggle to live, systemically impairing these nations in many ways.

In a number of African countries, for instance, hunger and poverty form a complex cycle, each affecting the other and involving education, human health and social inequities, political instability, and depletion of natural resources. Food choices in the affected country as well as in other, more developed countries, significantly influence this cycle, touching each of the components. Of primary importance is the decision whether to eat animal- or plant-based foods.

Surrounded by a host of factors, there are four primary ways food choice affects hunger and food security in developing countries—all negatively impacted by the demand to eat animals.

1. What we choose to eat in the U.S. and other developed countries drives resource use, food pricing, and policy-making on a global basis.

The correlation between animal (livestock and fish)-based food production systems and world hunger can be found in generalized global factors, as well as local ones within countries where hunger rates are high. These include:

1. Manipulation and control of seed manufacturing and pricing, primarily for livestock feed crops by large companies such as Monsanto and DuPont (Pioneer).

2. Buying and selling of grain, including futures, by Archer Daniels Midland and Cargill.

3. Processing and slaughterhouse practices and packaging by Cargill, Swift, Tyson, and JBS.

These few but very large and powerful companies control over 65 percent of all seed and grain and over 80 percent of all final animal products in the world. It is a very monopolized production and economic system, manufacturing seeds at one end and spewing out meat at the other.

Because of the global demand for flesh, cultural, social, political, and economic influences remain strongly supportive of the continued dominance of these large companies and of the meat, dairy, and fishing industries in general. This then drives how global resources are used (land, water, rainforests, oceans, atmosphere, biodiversity, etc.), how money is spent, and how policies are determined. The demand for animal products in developed countries, whether factory farmed or not, drives resource depletion in developing countries while also exacerbating poverty and hunger.

IT’S NOT A SUPPLY PROBLEM

Even with increased climate change and ominous weather extremes, we are producing enough grain globally to feed two times as many people as there are on Earth. In 2011, there was a record harvest of grain in the world, with over 2.5 billion tons, but half of that was fed to animals in the meat and dairy industries. Seventy-seven percent of all coarse grains (corn, oats, sorghum, barley) and over 90 percent of all soy grown in the world was fed to livestock. Add to that the 30 percent food waste from farm to table, and we see clearly that the difficulty is not how to produce enough food to feed the hungry but rather where all the food we produce is going.

Nevertheless, adequately managing the hunger-poverty cycle in developing countries is far more complex than simply giving them the grain that would normally be fed to livestock. A more multidimensional approach is in order—one that addresses all interconnected components by way of the key link, food choice.

THE CYCLE BEGINS WITH ANIMAL AGRICULTURE

At the heart of this cycle lies the ill health of the land and water resource base that supports them. For the past hundred years, slash and burn, pastoral (swidden) methods of farming with small herds of cattle have caused severe overgrazing, deforestation, subsequent erosion, and eventual desertification (approximately 200 million farmers use this method today). As a result, one half to two thirds of all topsoil on the African continent has been lost. Some areas have suffered complete topsoil loss. Much of the topsoil that does remain is simply infertile.

Purely plant-based organic agricultural systems have been shown to be the most effective at long-term soil rebuilding, increasing yields in some districts by as much as 400 percent. Quite simply, many countries in Africa and in the Amazonian region that suffer from hunger raise cattle at the expense of their soil and other resources, while producing a fraction of the food they could if they converted to plant-based foods.

Growing crops to feed livestock in developing countries requires 2 trillion cubic meters of water per year (264 gallons in one cubic meter), and the production and servicing of livestock animals takes another 536 billion cubic meters each year. In certain resource-depleted areas of the Horn of Africa, where cattle occupy 44 percent of the land mass, farmers are able to produce 2,000 to 3,000 pounds of grain, vegetables, and fruit per acre to be eaten directly by humans, but less than 100 pounds of meat and only a few gallons of milk when that land is devoted to livestock.

More than 40 percent of Ethiopians are considered hungry or starving, and fresh water there is scarce. Yet they have 50 million cattle (one of the largest herds in the world), as well as 50 million sheep and goats and 35 million chickens, needlessly consuming their food, land, and water. Ethiopia is cutting down 25,000 acres of its forests each year in order to make more room for their growing herd of livestock, while contributing heavily to greenhouse gas emissions along the way. The country of Eritrea has a human population of 5 million people, the majority of whom suffer from hunger and poverty. Yet they are using their sparse resources to support 6 million cattle, sheep, and goats.

Eighty-two percent of the world’s starving children live in countries where food is fed to animals, which are then killed and eaten by wealthier individuals in developed countries like the US, UK, and in Europe. One fourth of all grain produced by third-world countries is now given to livestock, in their own countries and elsewhere. Therefore, on a local basis, animal-based agriculture simply perpetuates hunger, poverty, and other components of the cycle such as illiteracy (as high as 66 percent in some countries) and poor human health.

In part two, we explore current and future solutions and how they connect to global food security.