Hospitalized with Ulcerative Colitis, I Turned to a Plant-Based Diet to Help Heal Myself

In 2012, I was teaching English in Japan when one day I found myself having to make a lot of urgent bathroom trips. I figured that I must have some kind of food poisoning, so I just let it go for a few days. Then I noticed blood in my stool. I also started to feel very weak and tired after work each day, which was not normal for me. I made an appointment with my general practitioner, who admitted me to Sendai-shi hospital for a sigmoidoscopy (a test that looks at the rectum and lower large intestine), and I was diagnosed with mild colitis.

At the hospital, the doctors told me that I had some inflammation in my rectum and lower bowel, and they said they’d like to keep me in the hospital for a week for observation.

I was put in the gastro ward and given antibiotics and aminosalicylate (5-ASA). I also had to insert a mesalamine suppository. Meanwhile, my condition kept declining. I went from around four bloody bowel movements per day to six or seven by the end of the week. The hospital gave me miso soup, rice porridge, half a raw egg, and some fish with soy sauce, as these were supposed to be easy to digest for colitis and Crohn’s patients.

I remained in the hospital, as I started having upwards of 10 bowel movements each day. My doctors put me on steroids to try and help my symptoms, to no effect. The frequency of my bowel movements continued to increase. Sometimes I couldn’t even make it to the bathroom, so I asked for a smaller, private room with a more accessible bathroom.

My parents flew in from New Zealand to be with me. At this point I’d been in the hospital for weeks and lost 30 pounds. I wasn’t responding to the medications. The doctors stopped giving me solid foods, with the hope that the medications would work better on my empty stomach. But that didn’t help. Soon I was having 15 bowel movements a day, often bloody.

I began to have intense abdominal pain that I needed strong painkillers for. I could barely walk and was so weak that I couldn’t even get out of bed to go to the bathroom, so I was in adult diapers, and my mom had to clean up after me.

By the fifth week in the hospital, I had lost 50 pounds. The gastroenterologist tried to do another colonoscopy but was unable to get the camera past my rectum because my colon was so inflamed. They suggested surgery. I was in so much pain at that point that I was up for anything. But my mother pushed back. She told them that I’d only gotten worse under their care and that she didn’t want them to operate on me.

The doctors said my only other option was to take tacrolimus, an immunosuppressive drug typically given to people undergoing organ transplant surgery. Since colitis is believed to be a result of the body’s immune system mistakenly attacking friendly bacteria, they thought the medication might help get it under control. So we agreed to give it a try.

I responded somewhat to the tacrolimus. The frequency of my bowel movements decreased from around 40 to 15. As I started to feel slightly better, I was allowed to introduce solid foods back into my diet.

Throughout all of this, my mother had been frantically researching remedies for colitis, and she’d read about the power of a healthful plant-based diet for healing Crohn’s and ulcerative colitis. It made a lot of sense to us and we decided to try it. We told the hospital dietitian that I’d only be eating the vegetables, not the eggs, fish, or other hospital food. My mom brought a blender and juicer to my room, and she started making me banana smoothies and celery juice.

Remarkably, after just a couple days, I began to feel better and more nourished. My stool started to form, and I was able to walk and control my bowels again. The doctors were pleased with my progress. Within a week, I started only having bowel movements three or four times a day, and while I was still weak from losing so much weight, I began feeling like myself again. The gastroenterologist was able to perform a colonoscopy on me and found that my inflammation had reduced significantly. He said that I was in remission.

A Rocky Road to Recovery

I returned home to New Zealand feeling better—but it wasn’t all smooth sailing from there.

I didn’t fully understand what to eat on a plant-based diet, and soon I caved to cravings and started eating some animal products again. Within a month, my colitis symptoms started up again, and I realized that animal products were aggravating my disease. I knew that I would have to stay plant-based if I was going to stay in good health. It took me a while to comprehend this as I loved meat, dairy, and eggs a lot.

But I did more research into plant-based diets, reading Prevent and Reverse Heart Disease, The China Study, The Starch Solution, and Dr. Neal Barnard’s Program for Reversing Diabetes. I also watched Forks Over Knives. I began to fully appreciate just how detrimental animal products were to our health. I was lucky that my family joined me on this journey and also went plant-based, so there were no animal products in the house to tempt me. That support was key.

It was still a difficult journey to wellness, though, as I struggled with mental health issues, including depression. But after about six months of ups and downs, I stabilized and was in good health once again.

It’s been eight years, and I’m happy to say that I’ve been well ever since, without needing medications. I enjoy an abundance of whole plant foods, and I’m thriving as a plant-based athlete. I’ve competed in mountain bike races, duathlons, and 10 half marathons. I’m currently preparing for a full marathon.

Adopting this way of eating was the best decision I ever made. I am very lucky to be here and grateful to have taken control of my health through a whole-food, plant-based lifestyle. 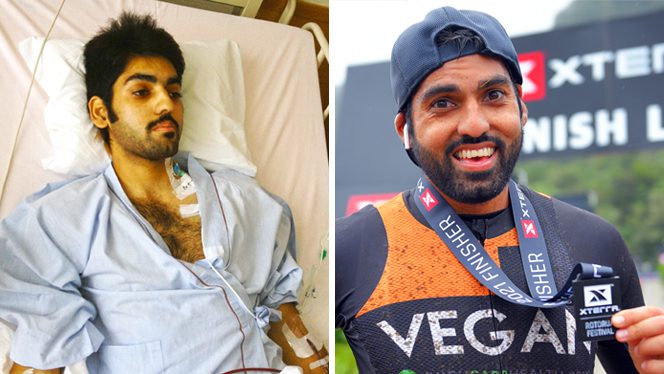