How I Lost 260 Pounds, Heart Disease, Constant Joint Pain and Gained My Life Back

For most of my life, I was either overweight or obese. I was an outcast in school and was teased because of my weight. I never had a boyfriend as a teenager and didn’t get invited to my prom. While my friends meant well, I was tired of hearing “but you have such a pretty face.” I desperately wanted to lose weight and keep it off. I tried every diet imaginable and usually did lose weight, but I would soon gain it all back, plus some more. Then, in my early 20s, I lost 50 pounds. I was so excited, and soon afterwards met the man who would become my husband. I got pregnant right away and then gained the 50 pounds back, plus about 100 more. I was devastated, but figured since I had a husband and a new baby, it didn’t matter what I looked like. That’s when I really let myself go.

After three beautiful children and some years of living this way, I was morbidly obese and (nearly) 200 pounds overweight. That number seemed to climb every day. I was miserable, but no matter what diet I tried (and I’ve tried them all), I ended up failing. I just couldn’t lose enough and keep it off.

When my youngest was only a few months old, I decided to get gastric bypass surgery. I was prepped and on the table (only five minutes from going under the knife), when my surgeon cancelled the surgery. My surgeon said it was because I was smoker and was too high-risk. Even though I had cut down to three cigarettes per day and had passed the pre-tests, including the lung exam and chest x-ray, he refused.

I was horribly disappointed and felt hopeless after this experience. I turned to food even more and started smoking a lot again. I didn’t know it then, but what I thought was stubbornness and insensitivity on my surgeon’s part was actually a huge favor. He saved my life. For the next decade, I tortured myself and my body with the standard American diet. I didn’t care for myself, my looks, or my health.

Instead of focusing on my weight and health, I put all my energy into improving my career. I was bored with working in the mortgage industry and pushing a pencil all day. I wanted more out of life. I wanted to work in healthcare and make a real difference in the lives of others. I enrolled in college and started a new chapter in my life.

Fast forward several years, and I was close to graduating with my MBA. I had already earned my BAS in healthcare management, an AAS in orthotics and prosthetics, and a board certification in pedorthics. I felt like I was on the right path to success. However, I was still miserable with some parts of my life: I was in a failed marriage and weighed over 400 pounds. I couldn’t walk across the room without being out of breath. My knees and joints ached non-stop.

On Black Friday in 2010, I was closing the Starbucks in Atlanta with Oscar, my friend and shift manager. I got up to use the restroom before making the 27-mile drive home, when I felt a sharp, shooting pain in my left arm. It shot quickly up to my shoulder and neck, traveled down my back, and radiated into my abdomen. Within seconds, I was doubled over in pain and on the floor. Oscar wanted to call 911, but I wouldn’t let him. I insisted I was OK and about 10 minutes later, got up to go home. Hunched over in pain in my van, I knew I was having a heart attack. I drove home, took a couple aspirin, and went right to bed without saying a word to anyone.

I woke up the next morning and went through the typical routine of making coffee. That’s when it hit me—I was alive! I felt like God must have reached out to me in my sleep, and I vowed that I was going to lose weight and get healthy starting on January 1. I was sick and tired of being sick and tired. A visit to the doctor confirmed what I already knew—I had suffered a minor heart attack, was morbidly obese, had high blood pressure and prediabetes, and was a ticking time bomb for a heart attack and stroke.

The First Day of the Rest of My Life

On Jan. 1, 2011, I woke up and began the first day of the rest of my life. I joined Planet Fitness, hired a personal trainer, and started strength training. Along with working out, I started to change my eating habits. I had absolutely no clue what I was doing at first, but I diligently researched to figure it out. I started with Weight Watchers and keeping a food journal. Then I started reading food labels, eliminated most processed foods, and focused on whole foods instead. I experimented with green smoothies. I started to lose weight steadily.

By the end of 2011, I had lost over 80 pounds. I felt great and looked even better. In 2012, after watching Forks Over Knives, I decided to go meat-free. I went pescatarian and then gradually went vegetarian and then whole-food vegan. This is when I lost the most weight in the shortest amount of time.

By 2013, I had lost 260 pounds! I did it all on my own, without surgery or drugs, and even without a support system. I also reversed my high blood pressure and heart disease, stopped my prediabetes in its tracks, eliminated my constant joint pain, and even improved my eyesight. I felt simply amazing, and had more energy than my kids who were in their teens and early 20s! I was, for the first time in over 25 years, able to shop off the rack. I wore jeans for the first time since I was a teenager. Oh what a feeling! But what really blew my mind was stepping my entire body into one leg of my old elastic-waist knit pants. Yes, that’s right…one leg! I cried and cried! They were happy tears. I was healthy and thin, and for the first time in my entire life, I felt beautiful.

Along with keeping all that weight off for over three years, I have lost another eight pounds and successfully quit smoking. I am now a whole-food, plant-based, organic health nut. And even though I do have some loose skin, you couldn’t pay me enough to go back to my old self. I’m healthy, happy, and love the new me! At 49 years young, I feel like I’ve reversed the aging process. 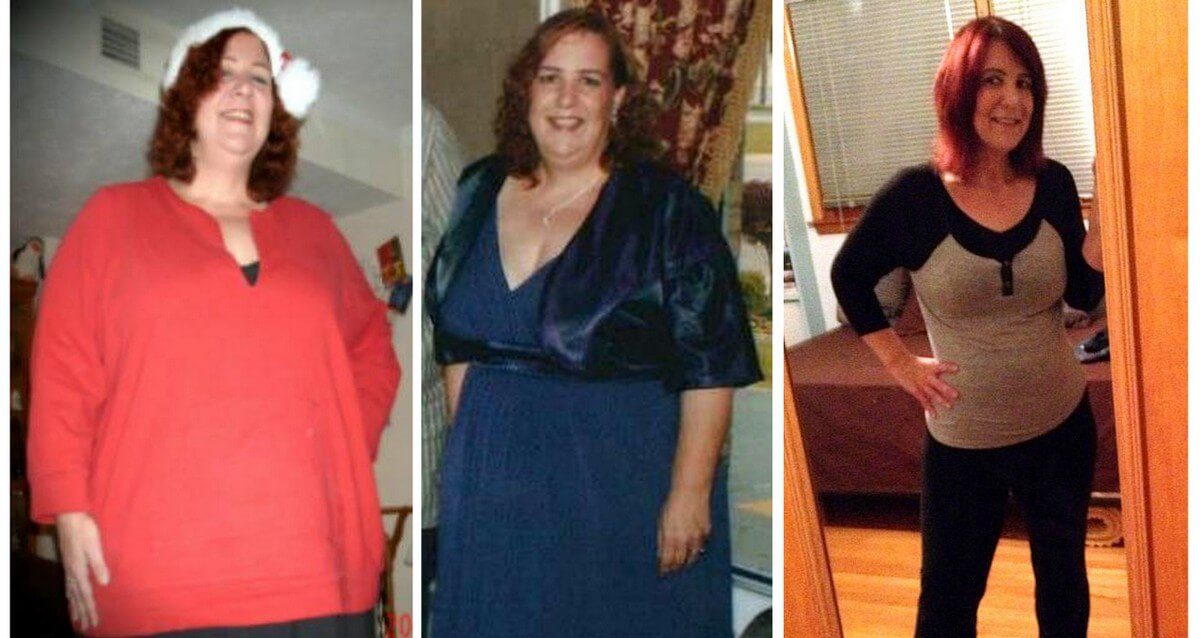