I was never a fat kid, but I was big, bordering on chubby. I was active. I played sports, I rode my bike, and I walked. I was a typical kid in the glory days before cable, the Internet, and “real” video games. I stayed that way through college—big, but not fat. My “body type” was large build, not lean … but as long as I maintained a level of activity, I manage my weight. But after college, I started to commute to work and sit all day behind a desk. I got cable. I got a PlayStation. I got lazy. Then I got married and had children. My sleep started to suffer, and I started to scavenge the last chicken nugget (or two) and finish off the last of the mac ’n cheese at the dinner table. Little by little, I started to pack on the weight … maybe 3 to 5 pounds a year. For 10 years.

By early 2012, I had begun to learn about our food system. We started to eat grass-fed beef, to avoid the E. coli in frozen hamburger patties. We switched to pastured chicken and cut out some processed foods, to eliminate much of the ubiquitous GMO corn. We cut out fast food after I saw the news stories about “pink slime.” We ate real cheese and butter, not the low-fat, fake versions. I thought we were making healthy foods choices. Then I picked up a copy of The China Study, which taught me about the link between animal protein and cancer.

Then the Forks Over Knives documentary came out on Netflix, and I watched it with my wife and sons. It brought The China Study to life for me, putting names and faces on the link between diet and disease. By that time my kids were 11 and 9 years old. And I was 6 feet tall and weighed 245 lbs.

At home, I was able to hide my size, wearing my XXL shirts untucked from my 40-inch-waist jeans, and athletic shorts and big t-shirts on the weekends. But on our July 2012 vacation on the beaches of Hawaii (before picture), I couldn’t hide it. I saw it in the pictures from that trip, and I saw it on the scale when I checked in for the Kauai helicopter tour. I was fat … obese, actually. I realized that I had two choices: I could just let it go, climb toward 300 lbs., prepare for diabetes and heart disease, and eat myself to an early grave—or I could make a dramatic shift, turn my life around, and get my health under control.

Making the Transition to an Active, Plant-Based Lifestyle

In August of 2012, I started to go to the gym and change my diet. Initially I just replaced my snacks with fruit: I’d eat three grapefruits instead of a half-dozen packaged cookies while watching TV at night. Or I’d eat four apples before bed instead of polishing off the dinner leftovers. I also went to the gym and started to jump rope—only 5 minutes at first, but gradually getting up to 30 minutes at a time. I also lifted light weights with high reps, aiming for long, lean muscles as opposed to bulky ones. And I started going to Bikram hot yoga three times a week. Sweating in a 105-degree room for 90 minutes helped to kick my metabolism into high gear.

I spent three months dabbling with the idea of eating only plants (a vegan day here, a week of vegan breakfasts there), and in January of 2013, I took the plunge, eliminating all animal-derived products from my diet. I picked up the Forks Over Knives Cookbook and started to make healthy meals for my family. I found good replacements for milk and butter and some easy, healthy plant-based frozen foods and snacks. And I found a new attitude toward food: food was fuel for my active lifestyle. And I made delicious fuel.

I was eating better than I ever had, and I was more active than I had been since high school. I felt great. My weight was dropping steadily, and by the time we went back to Hawaii in July of 2013, I weighed 190 lbs. I had lost 55 lbs in a year, without counting calories or any form of portion control. I just ate good food, and as much of it as I needed to satisfy my hunger.

In the Best Shape of My Life at Age 44

In late 2013, after my gym closed, I read two books by plant-based runners Rich Roll (Finding Ultra) and Scott Jurek (Eat and Run), and running became my primary exercise. These days, I run four times a week, averaging over 8 miles per run. I keep my heart rate low, and I run slowly. My weight is now down below 180, and I look and feel better at 44 than I did at 34 or even 24. I’m in the best shape of my life.

Even more important, I’m setting a great example for my sons, showing them that healthy food can be delicious and that the way we used to eat and live were slowly killing us. They’re still kids, so other than red meat and pork, we haven’t banned anything from their diets. We just don’t bring animal foods into our home … the meals we eat at home, and the lunches they take to school, are vegan. They can still eat chicken and fish when we go out to eat, but I’m proud to say that nine times out of ten, they choose not to. They’ve even started to decline pizza when it’s offered. I believe that allowing them to make these informed decisions will keep them making the right ones for the long haul.

The Next Phase: Helping Others Put Their Health First

The next phase of my evolution is sharing my story and inspiring others. I’m becoming a heath coach, because I know my “before” story is one that many men my age can relate to. Life gets so busy with work, family, home, and everything else that we put our own health on the back burner. I want to provide a real-life example of the change they can make, and to help them understand that living a long, active, healthy life is the greatest gift they can give their families

When I tell people I lost all the weight by going vegan, their response is always the same: they say they could never give up meat, or (most often) cheese, or whatever. But I’m living proof that they can. That you can. 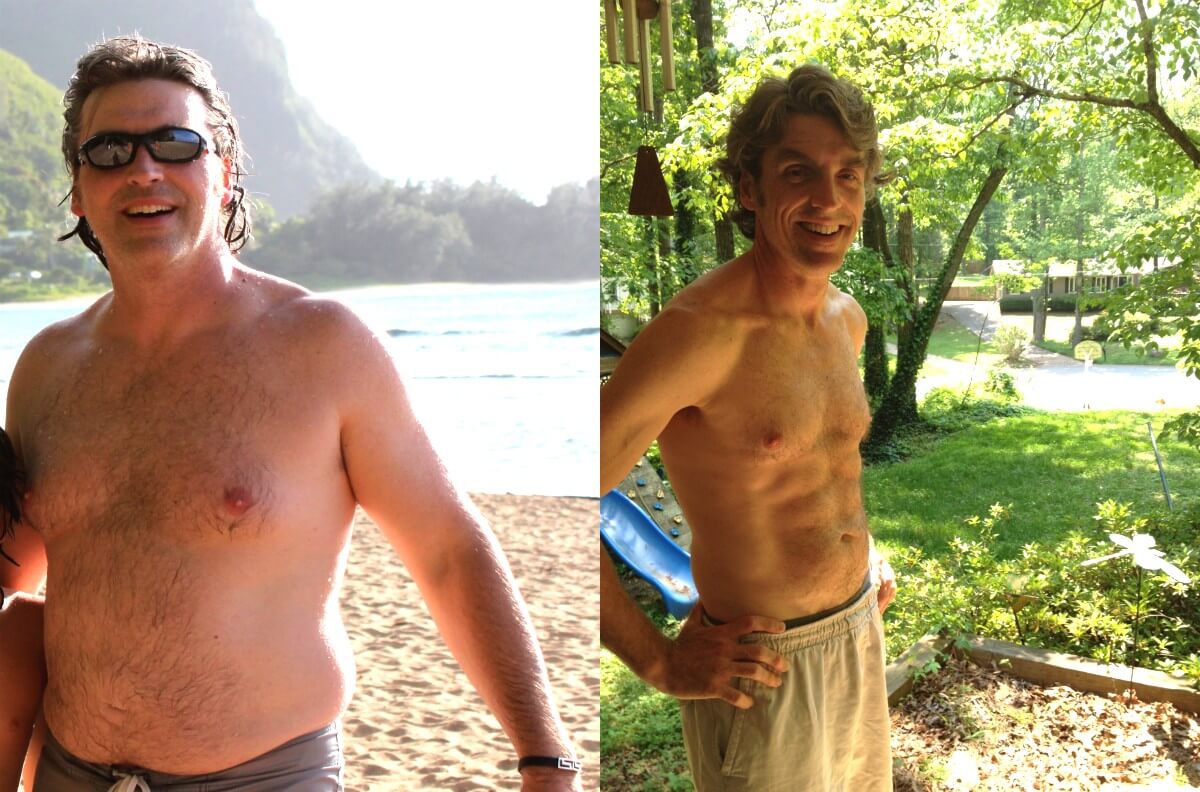