James William Booth had given up on dieting and given in to sugar and cheese addiction. But when weight gain and diabetes threatened his life, he decided to again try changing his lifestyle.

I never had problems with my weight or health in general as a young adult in my 20s, even though I smoked, drank, and ate unhealthy foods. However, I struggled with weight gain as I got older. I would periodically go on diets (mostly low-carb ones), only to find them unsustainable. I would regain what I lost and then some every time. Eventually, I gave up on dieting. I indulged in fast foods, sugary drinks, and highly processed convenience store snacks. I was addicted to cheese.

A few years ago, I was forced into early retirement because I was unable to stand for more than a moment at a time or walk more than 10 feet. Then I was rushed to the hospital because of a pulmonary aneurysm. I was morbidly obese at 400-plus pounds, with a BMI of 55. I had high cholesterol (217 total), high blood pressure (139/81), and type 2 diabetes (A1C level of 6.6).

After my hospitalization I was put on four medications. One day, all four of my medications needed to be refilled, and my doctor wanted me to come in before he would write the prescriptions. I became upset at having to make a co-pay for an office visit.

From Frustrated to Motivated

Upset and feeling like I was being taken advantage of by the health care system, I began looking for lifestyle solutions for my health conditions. That is when I stumbled across the documentary Forks Over Knives. I went out and purchased Forks Over Knives: The Cookbook and began preparing the suggested recipes.

At first, my friends and relatives were fine with my new diet: To them it was just another one of my dieting phases. But they soon raised strong objections to my not eating dairy or meat. Often they would voice concerns that I was not getting the right kind of nourishment, suggesting that I eat meat and dairy in moderation, or that I eat “healthier” types of meat and animal products, such as grass-fed beef or cage-free chicken and eggs.

After six weeks of being 100 percent compliant with the whole-food, plant-based diet, I caved. I decided to add the so-called “healthier” meat and dairy into my diet in moderation.

Serious Setbacks
While I’d been enjoying weight loss (170 pounds!) and less pain, within a year that all came to an end when I tore a nerve in my spine. I was forced to spend several months in bed, unable to exercise. All my progress with weight loss and improving other health markers was erased. I began to gain weight and feel unhealthy.

Over the following year I struggled with getting back to exercising and controlling my urges for unhealthy foods. I regained 100 of the 170 pounds that I’d lost. The following year was another miserable one, and by December 2017 I was bedridden. My left leg was swollen and throbbing with pain. The back of my head felt tingly and numb. Any kind of physical activity rendered me short of breath.

A Fork in the Road
I thought of going to the hospital then, but I pondered all the painful procedures that they would do to me and considered trying another path. I asked myself, “When was the last time I truly felt good?”

I recalled it being those six weeks of being 100-percent whole-food, plant-based. So I watched Forks Over Knives again, grabbed the cookbook, and got back on the road to recovering from morbid obesity and its chronic diseases.

Soon my energy level improved; my A1C level improved; and I was losing weight again. Eight months later, my health markers were all normal—without any help from medication.

I continued to lose weight with no effort. I ate when I was hungry and until I felt satiated. I realized that eating plant-based is a sustainable lifestyle. I’m no longer drawn toward eating meat or dairy. In fact, eating any unhealthy processed foods does not appeal to me at all.

Shouting from the Mountaintops
This experience has taught me that I’m responsible for my health. I now exercise six or seven times a week. My workouts include swimming and running a mile, and I have begun adding a weight-lifting regimen as well. I plan on being able to go on hikes again by year’s end.

When I tasted a summer squash for the first time this year, I went crazy over it, and I still can’t get enough of them. I love making Northern bean veggie soups. Taco Tuesday is a favorite day of mine: I toast corn tortillas in the oven and fill them with vegan oil-free no-salt-added refried beans, brown rice, green onions, and diced tomatoes.

My newfound health truly inspires me to shout from the mountaintops the benefits of plant-based living. I’m actively involved in the WFPB movement. I’m a member of several web-based support groups.

Thank you, Forks Over Knives, and all the doctors, dietitians, and chefs who have promoted this lifestyle and made it known to me. 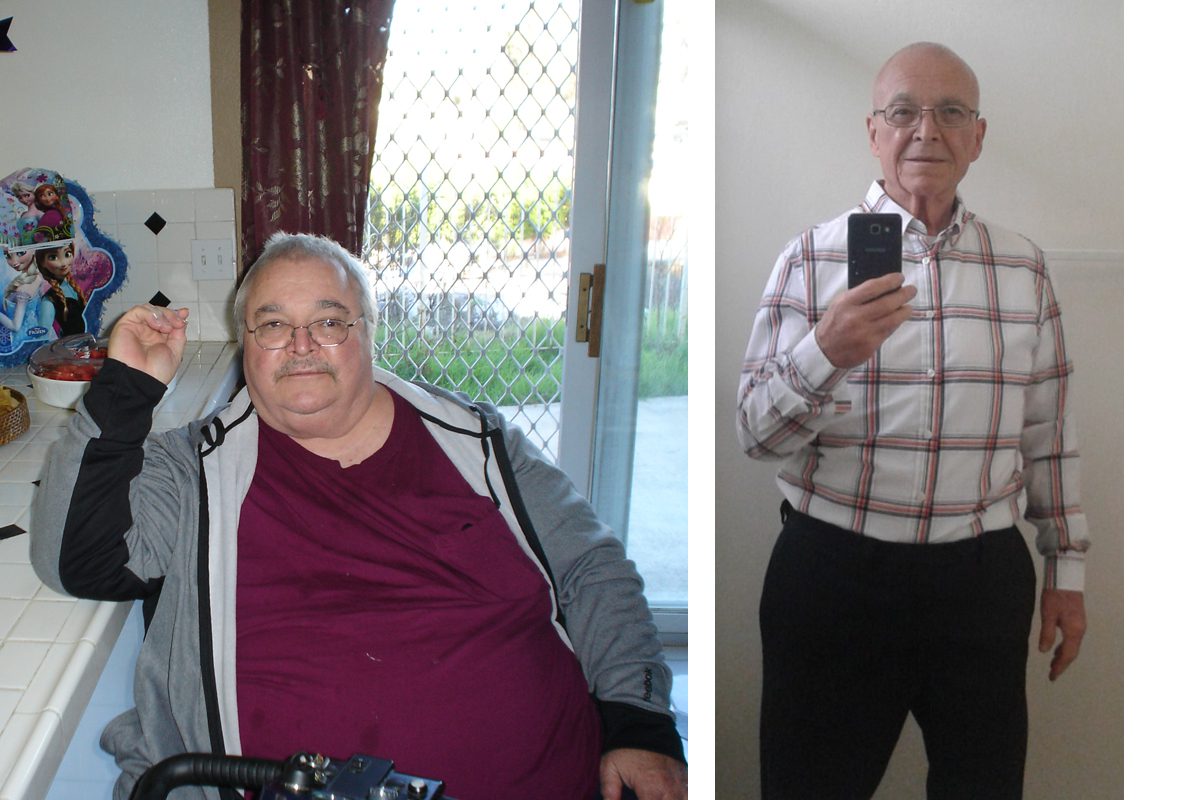