From soups to pilafs, the Instant Pot and other multicookers can deepen flavors while drastically reducing cooking time for a variety of dishes. Here’s what you need to know about these must-have kitchen tools.

What’s the difference between an Instant Pot and a pressure cooker?

Instant Pot is the best-known brand of a recent generation of kitchen appliances called “multicookers.” The “instant” in its name primarily refers to its function as a pressure cooker: Pressure cookers use high temperatures to cook foods faster.

But a multicooker can also morph into a slow cooker, a rice cooker, a steamer, a jar sterilizer or a sauté pan—all with the touch of a button. To perform these tasks, the Instant Pot relies on heat and pressure sensors, a tight-sealing lid with a steam release valve, and an electronic control panel. These let you easily program settings to cook everything from fresh vegetables to dried beans. You can even make cake in an Instant Pot!

How do you cook beans faster in an Instant Pot than on the stovetop?

Cooking beans in an Instant Pot lets you slash prep time in two ways. First, the pressure cooker function means you don’t have to pre-soak the beans—a major boon if you need them for a recipe right away. Second, the pot’s pressurized environment can cut the cooking time by half, and sometimes even more.

As a general rule of thumb, soaked or unsoaked beans should be covered with at least 1 to 1½ inches of water without filling the pot more than half-full. (Beans expand to almost three times their size when cooked.) Check out the Instant Pot cooking times for common bean types below, and you’ll see that they’re a fraction of the hours-long soak and simmer that most beans require on the stove. 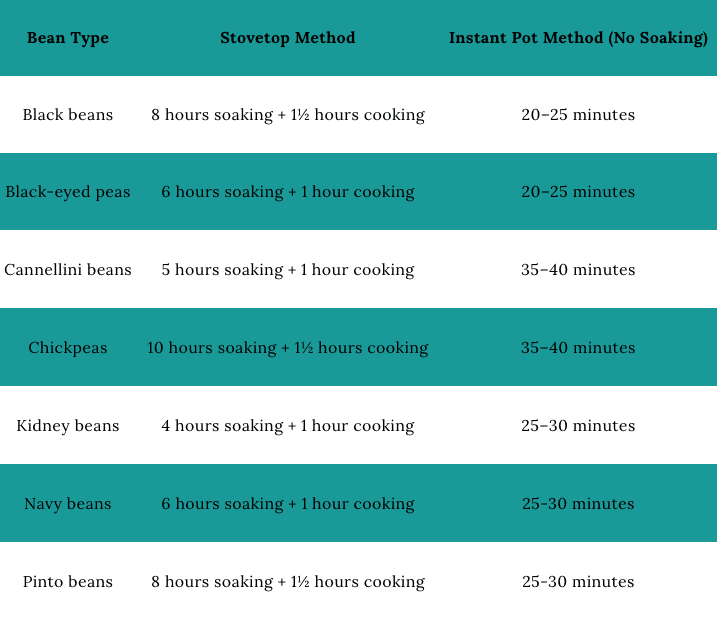 How do you use an Instant Pot to cook brown rice?

The Instant Pot’s Rice program is designed for long-grain or parboiled white rice, according to the manufacturer’s website. However, FOK Chef and Culinary Projects Manager Darshana Thacker uses that setting all the time for brown rice and quinoa: Using 1½ cups of water for every cup of dry brown rice or quinoa, she uses the “Rice” setting and lets the pressure release naturally, rather than using the Quick Release function. “I get perfect, tender brown rice every time,” she says of the hack.

Another option for cooking brown rice (and other whole grains) is to use the Manual/Pressure Cooking function. Here’s how:

Rinse and drain 1 cup or more of brown rice to remove excess starch and prevent it from foaming. Add it to the Instant Pot with an equal amount of water (1:1 ratio); seal; then cook on high pressure 22 to 28 minutes. Use the Natural Release valve setting to release the pressure. (Quick release may cause the rice to stick to the pan.) Once the pressure is down, open the pot and serve, or keep warm in the Instant Pot until ready to use.

You can also use the Instant Pot to make rice-based recipes such as an herb-laced pilaf.

How do you steam vegetables in an Instant Pot?

There are just two timer settings you need to remember to pressure-steam vegetables in an Instant Pot: 0 minutes and 15 minutes.

While it may seem strange, 0 minutes is the timer setting to use when pressure-steaming cut or cubed vegetables. Because the vegetable pieces steam while the machine is coming up to pressure, they require no additional cooking and are ready once the pressure has been released.

Whole vegetables including potatoes, sweet potatoes, winter squash, and artichokes should be pressure-steamed 15 minutes to cook all the way through.

To steam, place 1 cup of water in the Instant Pot; insert steamer basket; and add vegetables.

Can you make vegetable broth in an Instant Pot?

Yes—and you should! The Instant Pot’s pressurized heat draws out the flavors of vegetables in homemade stock and broth recipes. Simply follow the instructions for your favorite recipe (or try our vegetable stock). For a delicate, clear broth, adjust the simmer time to 5 minutes on high pressure in the Instant Pot. For a deeply-flavored stock, adjust simmer time to 30 minutes.

What does the “BURN” message mean on an Instant Pot?

“BURN” doesn’t necessarily mean the food inside a sealed Instant Pot is burning. (Whew!) Instead, the message indicates an overheat protection feature has kicked in and shut the machine down because the temperature has gotten too hot—and may cause foods to burn.

Overheating can happen if there isn’t enough liquid in the pot, if the liquid is too thick, or if the machine hasn’t been set up or sealed correctly.

When a “burn” message appears on the display, the best thing to do is cancel the current cooking program, release the pressure, assess the situation, and decide how to proceed.

Hearty soups, savory bean dishes, and tender whole grains are just a few ways we’ve found to maximize Instant Pot cooking at FOK. Taste for yourself with one of the following recipes.

5 Reasons It’s Tastier and Easier to Cook With a Pressure Cooker
Apr 13, 2016