The World Health Organization (WHO) released a report today that places processed meat in the highest of five possible classifications of cancer-causing substances, along with alcohol, asbestos, arsenic, and cigarettes. The WHO’s International Agency for Research on Cancer carried out the review, which also concluded that red meat was “probably carcinogenic to humans.”

The WHO cancer agency’s classifications came after a formal review by 22 experts from 10 countries, who looked at more than 800 studies done around the world that investigated meat consumption and cancer.

This new report, published today in The Lancet, classified processed meat as “carcinogenic to humans” (category 1). The experts found that “each 50 gram portion of processed meat eaten daily increases the risk of colorectal cancer by 18%” and that it also raised the risk of stomach and other cancers. (Two slices of bacon are about 50 grams.) Red meat, which they described as all “mammalian muscle meat, including beef, veal, pork, lamb, mutton, horse, and goat,” got a 2A classification because of more “limited evidence.”

What Is Processed Meat?

The WHO experts clarified that processed meat refers to meat that has been transformed through salting, curing, fermentation, or smoking. 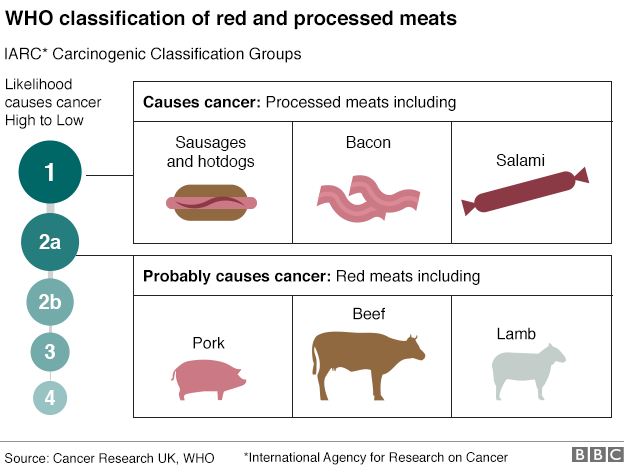 In the past, the World Health Organization’s anti-cancer guidelines have included recommendations for people to eat more whole grains and to limit processed meats and high-calorie foods. It remains to be seen how this new classification will affect future recommendations by the WHO and other government agencies around the world.

The American Institute for Cancer Research had this to say in its official statement:

“AICR strongly supports the International Agency for Research on Cancer’s report classifying red and processed meats as carcinogens, and we hope it will spread the message that what we eat plays a role in cancer risk… For years AICR has been recommending that individuals reduce the amount of beef, pork, lamb and other red meats in their diets and avoid processed meats like bacon, sausage and hot dogs.”