As a now-seasoned vegan and public health advocate, I consider myself an expert at “Vegan 20 Questions: Eating Out With Omnivores.” If you’ve ever gone rogue from the standard American diet (SAD), chances are that you too have encountered questions like these: Where do you get your protein? How do you live without bacon? Don’t you miss cheese?

I have always tried to respond in a way that leaves others with a better understanding of the plant-based movement, but in general, the line of inquiry never varied too much.

Until I became a mom.

Now that I have a 20-month-old little boy, the conversation at a recent company dinner was strikingly different from what I had become accustomed to during the first four years of my vegan journey.

The topic was triggered when I requested a veganized dish, and the focus quickly shifted to my son. People were very interested in how I could “make” him be vegan and how I was OK with him not having a “normal” diet.

In an effort to provide knowledge and debunk misconceptions, I want to share my answers to six common questions vegan parents often receive:

1. How can you raise him vegan? A vegan diet is not healthy for growing kids.

There is a growing body of research in support of well-planned vegan diets for kids of all ages. One of these is the 2016 position paper on vegetarian diets from the Academy of Nutrition and Dietetics, which states that vegan diets “are appropriate for all stages of the life cycle, including pregnancy, lactation, infancy, childhood, adolescence, older adulthood, and for athletes.” Furthermore, children raised vegan tend to grow up leaner, healthier, and with longer life expectancies, and they are more connected to their food than their omnivorous peers. A plant-based diet rich in a variety of whole foods is rich in essential nutrients for growth and development.

On the other hand, the SAD is characterized by low intake of fruits and vegetables and regular consumption of animal products, including foods higher in sodium, saturated fat, cholesterol, and refined sugar, as well as more “convenience” meals that are often eaten outside the home.

The SAD has been linked to increased risk for obesity and a variety of chronic diseases, starting in childhood, whereas well-planned veganism has been shown to prevent and even reverse many of these ailments.

Yes, it’s still possible to eat poorly as a vegan (I’m looking at you, Oreos), but I make sure that our family’s diet is based on whole grains, fresh produce, beans, legumes, nuts and seeds, plant-derived proteins, and healthy fats.

2. How could you make that choice for him?

Every parent does their best to ensure that their kids are nourished, healthy, and safe. Veganism meets those requirements for us and aligns with our family values. Being vegan from conception, my son will never develop a craving for bacon, dairy, and fast food that many children do. Choosing to start him out in this way benefits him both throughout childhood and into adulthood, and we believe that is an insurmountably positive decision that we can make on his behalf. Furthermore, he will have the tools to be a catalyst for change in the world as he grows up.

3. What if he wants to eat meat when he grows up?

That will be his choice. He will be raised with all of the information needed to make an educated decision later in life. In the meantime, he will grow up understanding why we are vegan, and he can determine if those reasons are enough for him to remain vegan into adulthood.

4. What will you say when he asks why his food is different from everyone else’s?

We will answer his questions honestly and in the detail we feel is appropriate at that time. This will be an open, ongoing conversation as he grows up and experiences different social situations. From a young age, he will be connected to the food on his plate, be knowledgeable about the great nutrition he is getting from plants, and ultimately be empowered to share this information with his friends when they ask or make comments about his food.

We will of course be nervous at his first birthday party or school celebration, when all of the other kids are eating pizza and cake. That being said, we’ve already mastered daycare survival with a vegan kid, and these skills will undoubtedly come in handy for other scenarios as well. For instance, we can easily pack alternative snacks, like homemade vegan tortilla pizza or fun rolled-up burritos. We can prepare a vegan dessert together ahead of time that he can bring to share with the other children, introducing them to delicious animal-free foods.

5. What do you feed him? A vegan diet can’t provide adequate nutrition for a child.

With consideration of age-appropriate textures (e.g., pureed, mashed, cut up), my son eats what we eat. He is exposed to foods rich in color, nutrition, and flavor. There is no need to make special “kid-friendly” meals separate from ours. He still has the freedom to determine his likes and dislikes, which he exercises as his desire for independence develops.

Some of his favorite foods at this stage are mashed avocado with nutritional yeast on whole-grain toast, bean soups with bold flavors and fun colors, and pancakes made green with spinach or purple with blueberries. He also likes almond butter and jam sandwiches, spaghetti with messy tomato sauce, and saucy lentil loaf with mashed potatoes.

And I hope that by the time he’s old enough to attend school, there will be plenty of vegan options, like those the students at Los Angeles Unified School District will have, starting this fall.

6. What about his growth/development?

He has followed a normal, linear pattern on the growth charts for height, weight, and head circumference. His labs are excellent. His eyes and teeth are strong. He is healthy, happy, and thriving on plants.

There is a fear that exists about feeding children anything outside of the “normal” parameters of the SAD, thanks to a deluge of misinformation about veganism and evasive headlines about vegan diets being dangerous for kids. When done right, kids who are raised vegan can flourish on a plant-based diet. Furthermore, they are setting the stage for healthy habits in the future—habits that will make them much less likely to develop diabetes, heart disease, obesity, high blood pressure, and more later in life. I can’t think of a better way to give them a head start. 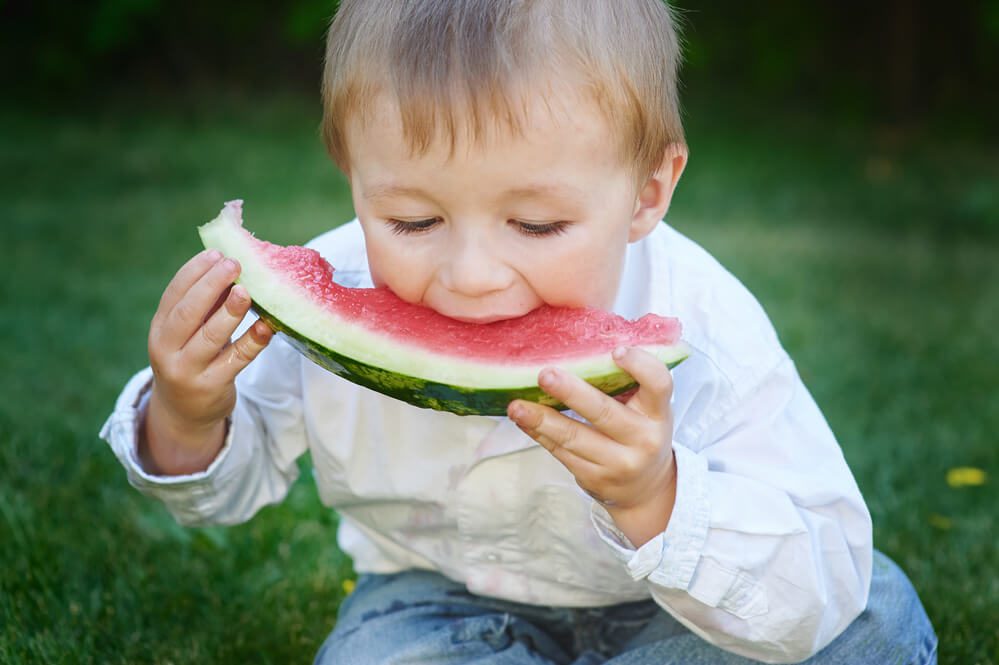 Lauren Panoff, MPH, RD, is a veg-mom of two, a plant-based lifestyle strategist for families, and a freelance writer. She resides in Colorado. Find her at www.laurenpanoff.com or on Instagram @chronicplanet.