For the two and a half years after having my daughter, I struggled every day with my weight, my body image, a lack of energy, and most of all my self-esteem. In 2012, two years after giving birth, I was still at my 40-week pregnancy weight, 190 pounds. For 30 months, this voice in my head bullied me day and night, shouting “You’re fat. You’re ugly. Look how big your clothes are. You’re never going to change. You have no willpower. Might as well give up now … you’re already down that path.”

In between beating myself up over my health, though, I sometimes had this hopeful voice in the back of my head telling me something would motivate me to change … I just had no idea what it was going to be.

The key became incredibly clear to me, with immense thanks to Netflix and YouTube, on the last two days of 2012. Having discovered several food documentaries, one being Forks Over Knives, and an informational health presentation, my world―and my views about food and well-being―changed overnight. My answer was to go vegan, to adopt a plant-based lifestyle.

So on January 1st of 2013, I began a new journey in life. As the first weeks went by, the changes that came along with the plant-based lifestyle astonished me. After three days of no dairy, I started breathing better, though I had no idea I had struggled before. My chest, my lungs, my body felt lighter and cleaner. A fog lifted from my mind, and I felt clear-headed and alert. I was inspired to try new foods and scope out new recipes. I had more fun cooking than I had in years. Best of all, I started losing weight immediately.

Slowly, over the first six months, I dropped close to 30 pounds. A few months after that, I visited my doctor for strep throat. A routine blood pressure reading revealed that my previously high blood pressure (high 140s in 2012) had dropped to 102/72 … Wow! I almost burst into tears. Never in my adult life had my blood pressure been so low!

Today, I am happily resting at 145 pounds, my pre-pregnancy weight … an accomplishment I would never have dreamed possible in 2012. In addition to that, I feel amazing every day. I’m happy, have plenty of energy, and the acne that used to cover the sides of my face has completely disappeared. I’m content in my own skin again … and I’m very happy to be leaving a lighter footprint on this planet for my daughter and future generations.

While 2013 had its ups and downs and trials and errors, I feel like I am growing into the person I have always wanted to be. I have found my path and am already inspiring others by example to find theirs. I enthusiastically recommend Forks Over Knives and similar documentaries to anyone who shows interest. Watching others make changes after witnessing my transformation has been the most inspiring thing of all. 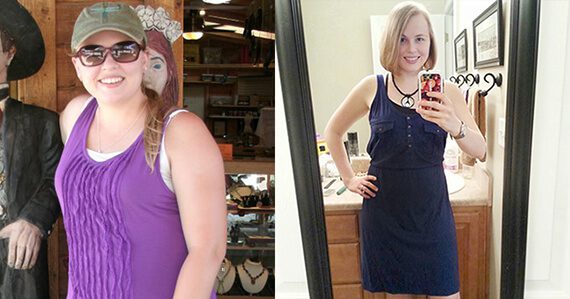