Editor’s note: Kate McGoey-Smith passed away in October 2022. Learn more about Kate’s life and read remembrances of her by friends and family here.

In 2007, busy had become my norm. As a wife, mother of three school-age kids, and clinical supervisor, I had little time to spare. Still, I loved every minute of my hectic life. I sprang out of bed every morning looking forward to the challenges of each new day.

At the time, I was eating what I later came to realize was a vegetarian version of the standard American diet, substituting the meat on my plate for fake, highly processed “veggie meat” products and exercising three times a week at Curves.

That September I developed a cough, and by the following June it had become persistent. Soon I was dealing with slow-motion sluggishness and increasing fatigue, and I developed noticeable swelling of my legs and abdomen. Those symptoms led to an acute care visit where I learned I was suffering from type 2 diabetes with an A1c blood glucose level of 15.2 percent (the range for those without diabetes is 4–6 percent).

More testing revealed a diagnosis of both severe right-sided heart failure and severe sleep apnea. Six months later, my sleep specialist informed me that I had idiopathic pulmonary arterial hypertension (IPAH). I was classified as a level 3 out of 4 and told that this rare disease, characterized by high blood pressure in the pulmonary arteries of the lungs with no apparent cause, only affects two to four people out of every million. It has no cure and comes with a terminal prognosis: two years to live without treatment and five years to live with treatment. Suddenly, my life as I knew it was wiped out.

I had to stop work immediately, and within months I required a nasal cannula and had to carry around a heavy tank of oxygen, like a scuba diver on land! The deterioration continued rapidly with the loss of my eyesight, which was caused by a combination of a lack of oxygen to my eyes, diabetic retinopathy, and the prescribed IPAH drugs. My medication list was a page long, and I stayed at home except when attending up to three medical appointments a week, keeping more than five medical specialists busy. My disease progressed to the point that I was placed on a monitoring list for a lung transplant. I continued on a variety of drug combinations ranging in cost from $36,000 to $100,000 per year.

Then one evening, I turned on the TV. CBC host George Stroumboulopoulos was explaining that the documentary Forks Over Knives had changed his life and might do the same for viewers. My husband, Andrew, and I watched it from the front row of the movie theater—the only place I could see it with my limited vision—and we were on board. In November 2012, after a year of trial and error, I reached out to Caldwell Esselstyn Jr., MD, for a consultation that would change my life. The next month, with the generous support of friends and church members, I attended a five-day intensive program at Dr. McDougall’s Health and Medical Center, founded by Dr. Esselstyn’s colleague John McDougall, MD. It was there that I gained the tools and knowledge to adopt a plant-based lifestyle.

I taught myself how to cook while legally blind and too weak to stand. I started by choosing meals I love to eat—healthy, delicious versions of international cuisine—for example, Indian chana masala (chickpeas cooked with tomato and onions) and Chinese stir-fried veggies cooked in no-salt veggie broth or water. I followed Dr. Esselstyn’s research, and I ate a fistful of steamed greens six times a day with a sprinkle of flavored vinegar.

Fifteen months later, my eyesight was fully restored, I was off the lung-transplant monitoring list, I needed oxygen only at night, and I no longer required diabetic medications. My right-sided heart failure was gone, and so were symptoms like neuropathy, dizzy spells, and fainting. By June 2013, I had lost more than 110 pounds. My respirologist downgraded my IPAH to level 1 (from level 3) and took me off my IPAH drugs.

While others empowered me with knowledge and support, the change came about because of me—and what I chose to put on the end of my fork!

This Success Story was originally published on August 2018, 2017, and has been updated. 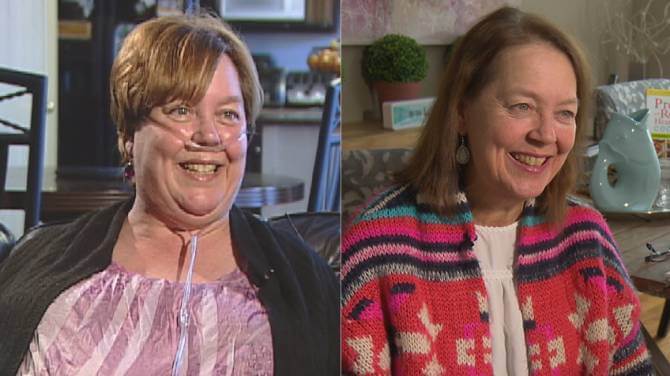