I have been a physical therapist for the past 15 years. Over that time I have worked with thousands of patients and have had a front row seat to aging, health changes, and rehabilitation. My professional experience showed me that eating less processed foods and more plants is of benefit to anyone. But my own journey toward whole-food, plant-based eating didn’t start until a few years ago.

In 2015 I started experiencing tightness and some pain in my low back and right hip. I’d had a baby in August 2014, so I figured the tightness and pain were just because of being weaker, out of shape, etc. The pain gradually increased over time, and by 2017 I was in pain every day. I awoke two or three times each night, and I began to lose range of motion in my right hip.

I went for MRI scans and discovered that I had pigmented villonodular synovitis (PVNS), a type of rare noncancerous tumor in my right hip joint. I underwent surgery in December 2017 and was told that due to the location and severity of the tumor, the inside of my joint was badly damaged and it would be a year-long rehabilitation process.

Fast-forward to October 2019, and my hip still hurt every day—not as bad, but I was discouraged that I still had consistent pain almost two years later. While looking for something to watch one night, I came across The Game Changers, a documentary about plant-based athletes, on Netflix. There were a few athletes featured that went plant-based in order to recover from injuries. While watching the film, it was like everything clicked into place for me. I thought back to patients over the years who were plant-based and how they always did well after surgeries or injuries. I wanted to see if I would feel better and have less hip pain if I adopted a whole-food, plant-based diet. My husband, who is health conscious also, watched The Game Changers, too, and was open to trying the diet with me.

The first month was challenging, because I didn’t know what to cook. We had a lot of burrito bowls and veggie stir fries. Then around the first week of December, I was running into my office during bad rain, and it hit me: “My hip doesn’t hurt! And I’m running!” I then realized I hadn’t felt pain in my hip for several days. This was the first time in nearly five years that I didn’t have pain. That did it for me. I was sold on the WFPB diet.

Other effects I noticed included better energy throughout the day and clearer skin. My husband has noticed improvements in his energy level as well. Our kids have been really adaptable, and they enjoy most of what I make.

I have tentatively started running again. I ride horses and am more balanced in the saddle due to less pain in my hip. I sleep through the night without waking due to pain. I am 41 and I feel better than I did in my mid-30s because I no longer have chronic pain. I have been on this plant-based journey for approximately nine months and have no intentions of changing.

I hope my story can encourage others who have struggled with chronic pain. If you are wondering if diet can affect pain, I can confidently tell you, “Yes!” 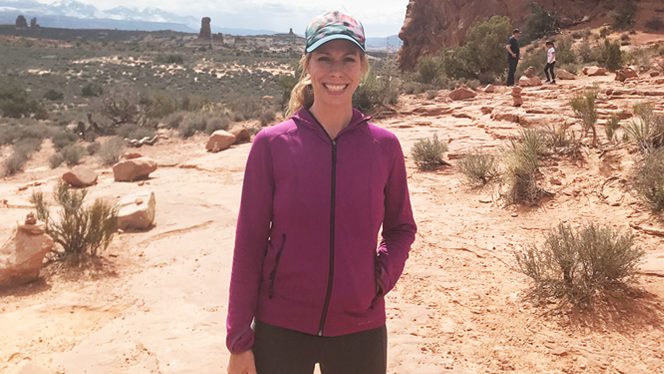