After Breast Cancer, a Plant-Based Diet Gave Me a New Lease on Life

After breast cancer treatment and years spent suffering the side effects of medications, Teri Carpenter felt broken, beaten down, and ready to give up—until a plant-based diet offered new hope.

I used to be an emotional binge eater. I would starve my body while working a 12-hour day then go home and eat and eat—usually fast food and lots of ice cream. I was packing on the weight and oblivious to the impact on my health. My life changed when, after a routine mammogram, my doctor called me into the office to tell me what nobody ever wants to hear: “You have cancer.”

Surviving But Suffering
My breast cancer was aggressive, and so was the treatment. By the time treatment was finished eight months down the road, I was sicker, broken, and armed with a buffet of pills. And although I thought the one silver lining of my illness would be weight loss, I’d actually gained weight, due to the steroids and becoming sedentary.

My health continued to decline over the next three years. The aromatase inhibitors, which I’d been prescribed to reduce estrogen, had horrible side effects: joint pain, muscle pain, and mood swings. I began suffering from chronic fatigue and was often bedridden for 22 hours of the day. The bone pain was relentless. I was on heavy doses of opioids. It was insane, and I felt like my life was out of control. It got so bad that I didn’t want to go on living. It was August, and I felt I wasn’t going to make it to Christmas.

Turn of Fate
It was during this time that I was lying in bed with my laptop and an ad for Forks Over Knives came up. I went to Netflix and typed in the title, three words that would change my life in a much better way than those three words I heard from my doctor three years prior. I watched the documentary—twice. I was transfixed. I didn’t know what the heck “those” vegan people ate. I didn’t know how I was going to stand up long enough to cook a meal. I just knew I had to try this.

I began simply, with quick salads. I could only stand for a couple minutes at a time, so I’d sit and peel and chop. As the days went by, I had a little more energy. On the good days, I would make extra so that I had healthy meals ready. After only three weeks, I found myself awake for up to eight hours. I expanded my cooking skills. I would spend four hours daily slicing and dicing while watching YouTube recipe videos. I was loving it.

I decided I wanted to eliminate some of my medications, starting with the aromatase inhibitors; I’d tried three different ones, but each seemed worse than the last. I called my oncologist. We discussed a plan, and I began phasing them out. Pretty soon after, I felt better than I had in a long long while. My mind was clearer, my bone pain was diminishing, and for the first time I felt like I was finally in control over my body. Next to go were the opioids. I slowly decreased the dosage over the course of a month. It wasn’t fun or easy, but I was a woman on a mission!

After a month on my new whole-food, plant-based diet, I was able to drive to a doctor’s appointment for the first time in a while. (My appointments had been via phone when I was too ill to leave the house.) My doctor noticed my weight and blood pressure were both coming down, slowly but consistently. Three months later, after a second set of tests, he asked me what I was doing, thinking I must have started taking some new medication. I told him about Forks Over Knives and my new diet. He couldn’t believe that was all I’d changed.

He had me come in every two weeks after that. To my surprise, he informed me he watched the documentary. I became his poster child for eating healthy, getting healthy against all odds. Eventually, he told me it was safe for me to stop taking my blood pressure pills—the only medication I was still on at that point. After four years, I was finally medication-free.

Excited for Life
Today I no longer need my scooter or wheelchair. I can walk short distances without my cane. I swim daily and do water aerobics three times a week; resistance exercises five times a week; and moderate weight training three times a week, to help build my upper strength. I had to learn how to walk again and am still working on my balance, but I am getting to know my new body, its limitations and its abilities. I have lost 51 pounds since last September, but the weight loss was just a bonus. Just to be able to get out of the house is an incredible experience. And I’m finally healthy enough to get breast reconstruction surgery!

I will forever be grateful for Fork Over Knives. It gave me a second chance at life, a chance to live with purpose and meaning and fun. I love the recipes, blog posts, and all the support. It seems more and more people are eating this way, and that makes me so happy, because I know so many lives are being saved. 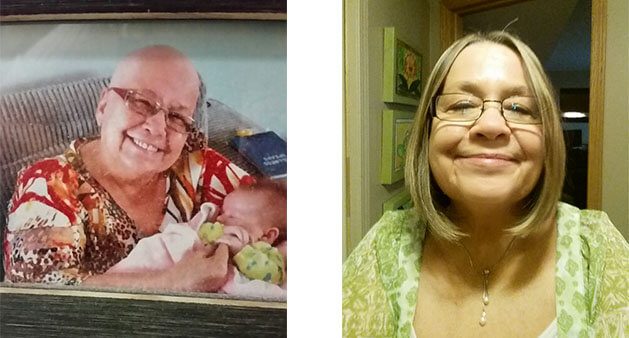