How has public perception of plant-based eating changed over the past decade, and what’s next for the movement?

Luminaries from the original Forks Over Knives film reunite for a thought-provoking conversation with plant-based scholar Nina Gheihman, PhD, in celebration of 10 years of Forks Over Knives.

Watch T. Colin Campbell, PhD; Neal D. Barnard, MD; Caldwell Esselstyn, MD; Rip Esselstyn; and Forks Over Knives executive producer Brian Wendel discuss how the plant-based movement has grown in recent years, what they see on the horizon, how to navigate the changing landscape in the healthiest possible way, and more.

ABOUT THE PANELISTS
Nina Gheihman, Ph.D., is an author, speaker, and scholar on the plant-based foods industry. Based on her dissertation work at Harvard University, she is currently writing a book about the plant-based movement, to be published next year by Bloomsbury USA. Nina’s work has been featured in both academic and popular outlets including the journal Sociology Compass and media outlets Refinery29, The Telegraph, and The Atlantic.

Caldwell B. Esselstyn, Jr., MD, has been a surgeon, researcher, and clinician at the Cleveland Clinic for more than 35 years and is the first recipient of the Benjamin Spock Award for Compassion in Medicine. He summarized his pioneering research in his best-selling book, Prevent and Reverse Heart Disease, and has written for more than 150 scientific publications. He directs the cardiovascular prevention and reversal program at the Cleveland Clinic Wellness Institute.

Rip Esselstyn spent a decade as one of the world’s premier triathletes. He then joined the Austin Fire Department, where he introduced his passion for a whole-food, plant-based diet to Austin’s Engine 2 Firehouse in order to rescue a firefighting brother’s health. To document his success he wrote the national bestseller, The Engine 2 Diet, which shows the irrefutable connection between a plant-based diet and good health.

T. Colin Campbell, Ph.D., has been dedicated to the science of human health for more than 60 years. His primary focus is on the association between diet and disease, particularly cancer. Although largely known for The China Study—which documents one of the most comprehensive studies of health and nutrition ever conducted, and recognized by The New York Times as the “Grand Prix of epidemiology”—his profound impact also includes extensive involvement in education, public policy, and laboratory research.

Neal Barnard, MD, FACC, is an adjunct professor of medicine at the George Washington University School of Medicine and president of the Physicians Committee for Responsible Medicine. He has led numerous research studies investigating the effects of diet on diabetes, body weight, and chronic pain, including a groundbreaking study of dietary interventions in type 2 diabetes, funded by the National Institutes of Health, that paved the way for viewing type 2 diabetes as a potentially reversible condition. He has authored more than 20 books and is the editor in chief of the Nutrition Guide for Clinicians.

Brian Wendel is founder and president of Forks Over Knives, a global multimedia brand that empowers people to live healthier lives by changing the way the world understands nutrition. He created and executive produced the 2011 documentary film Forks Over Knives, which has been viewed by millions of people around the world and has become one of the most influential documentaries of our time. 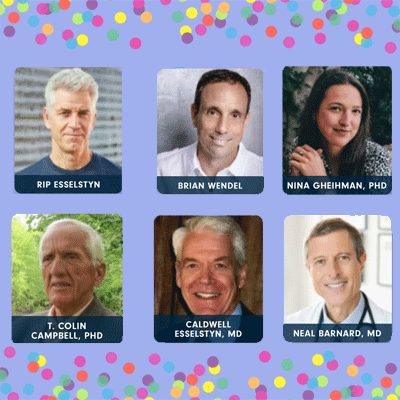 Chickpeas 101: Everything to Know About the Lovable Legume

Webinar: How to Heal Your Gut and Transform Your Health with Plants
Jun 8, 2021
Webinar Replay: How to Eat to Relieve IBS and Heal Your Gut
Oct 23, 2020