Become a Plant-Based Home Chef in 90 Days Early-Bird Special! Get 25% Off Through June 7 SIGN UP NOW
Photo by Ed Reed/Mayoral Photography Office

In a move that acknowledges the importance of a plant-based diet for better health, New York City Mayor Bill de Blasio announced that 15 Brooklyn schools will participate in Meatless Mondays beginning next spring. Joined by Schools Chancellor Carmen Fariña and Brooklyn Borough President Eric Adams, de Blasio made the announcement on Monday.

Meatless Mondays is a global movement inspiring organizations, institutions, communities, workplaces, and families to commit to abstaining from meat at least one day a week. According to a statement from the mayor’s office, the Brooklyn program will provide participating schools with healthy, all-vegetarian breakfast and lunch menus every Monday during the school year.

“Cutting back a little on meat will help make our city healthier and our planet stronger for generations to come,” de Blasio said. It was also announced that the mayor and First Lady Chirlane McCray have committed to eating vegetarian on Mondays, too. “Chirlane and I are excited to participate in Meatless Mondays at home, and we thank Borough President Adams for leading the charge behind this healthy and sustainable initiative,” he said.

“I am living proof of the power of a plant-based diet to transform one’s health,” said Adams. “I believe that Meatless Mondays is an extremely significant initiative that has the power to transform the health of thousands of our city’s students, as well as open the door to a powerful conversation that children can have with families on nutrition and wellness. I thank Mayor de Blasio for working with me on this mission to change our relationship with food and tackle nutritional health in a real way. As Hippocrates said, ‘Let food be thy medicine.’”

Adams’ own experience with type 2 diabetes, led him to switch to a plant-based diet, and he’s cited Forks Over Knives as a helpful documentary in his health journey that “deserves a viewing from everyone.” Since turning his health around, Adams has become a vocal advocate for plant-based nutrition.

The announcement was made at Bergen Elementary School (P.S. 1) in Brooklyn’s Sunset Park neighborhood, one of five schools in New York City that now serve an exclusively vegetarian menu every day of the week. 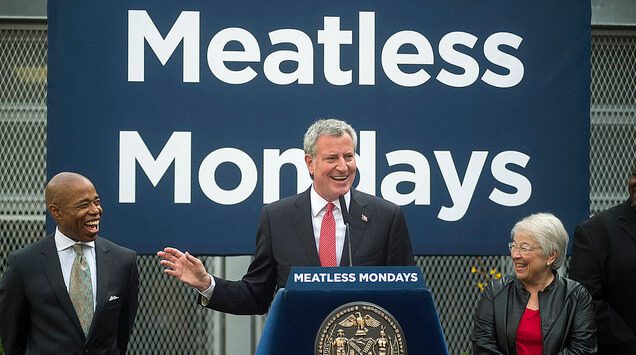 Maya Gottfried has been living happily plant-based for nearly a decade and makes her home in New York’s Hudson Valley. She is the author of the books Vegan Love: Dating and Partnering for the Cruelty-Free Gal and Our Farm: By the Animals of Farm Sanctuary. You can follow her on Twitter.