Frozen yogurt shops have been going strong for the past decade in the United States, and the hot trend hasn’t yet started to melt. Froyo is marketed as a healthy twist on ice cream, which is part of the reason it’s become so popular. The new frozen treat on the block is FroFru, or soft-serve fruit, which is a healthy twist on frozen yogurt. It’s made only from fruit, so it’s dairy-free, vegan, gluten-free, low-fat, and pretty guilt-free.

Frozen Fruit Co, the brainchild of husband-and-wife team Michael and Victoria Philippou, started in London. The Philippous were big city lawyers when they came up with the idea. They both had sweet tooths, but were also health-conscious. Michael says, “We wanted to create something that tasted great but was healthy with a short and simple ingredient list.”

A great plan, but a big feat for two people who were not chefs and had never developed recipes before. They started recipe development in their London apartment in 2012, squeezing the R and D into their after-work and weekend hours. It took many months, and Michael explains how tricky the process was: “We were committed to doing it with only fruit and natural fruit sugars. People usually make sorbet with sugar syrup or fruit juice as the base and then add just a little bit of fruit. We didn’t want to do that—we didn’t want to water down the flavor at all.”

The Philippous eventually found a way to make their tasty soft-serve fruit, which is made from whipped layers of fruit mixed with some dates and/or natural fruit extracts. After they were happy with the product, they started slowly selling to local businesses, and their innovative product immediately got a lot of notice. They were featured in Vogue, The Daily Mail, and Jamie Oliver magazine. They even got a BBC Good Food award. 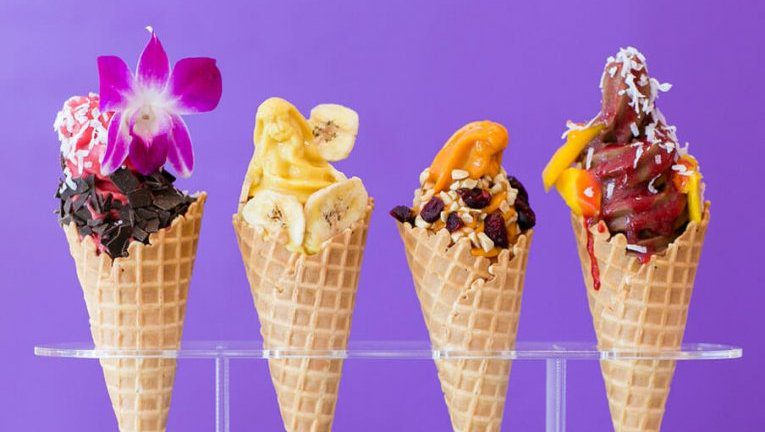 The pair quit their jobs and started the second part of their of their quest: to bring their soft-serve fruit to Los Angeles. They’d always loved LA, and they felt like the health-conscious city was the perfect place to debut their first storefront. It made good sense to start out in a place that loves health and wellness trends; frozen yogurt shops, juice bars, and yoga studios are an everyday part of the Los Angeles landscape. But for the Philippous, it was harder than it sounds to pull off: they had to get the right visas, sell their home and most of their possessions, move to a different country, and open their first store.

They opened their storefront in Santa Monica in July and have received a warm reception from locals and the press. Frozen Fruit Co. currently features four flavors: Mango, Raspberry & Orange, Strawberry, and Coconut & Cacao. They also have FroFru bowls (which they market as “dessert you can have for breakfast”) and optional toppings like fresh fruit, carob chips, and coconut flakes.

Frozen Fruit Co. is located at 729 Montana Avenue in Santa Monica, California and they deliver locally via Postmates, GrubHub and Doordash.