Forks Meal Planner makes it easy! Create delicious plant-based meals every week. Get Started
Photo by Cropped composite image of a woman when she was young and old

Telomeres, the Key to Longevity, Show Food May Be the Best Anti-Aging Treatment

The global anti-aging market will be worth nearly $200 billion in 2019. New beauty technologies make anti-aging products big business. But what about the possibility of anti-aging treatments for the health of our body, and not just the surface of our skin? Is there a way to fight not only wrinkles but also biological aging leading to disease and death?

Today we are learning more about the molecular pathways underlying aging and how the foods we eat can affect these pathways to slow down or speed up the clock. We do have an anti-aging secret, one that can keep us young inside and out, and it’s the best-kept one to date.

Telomeres, a Key Part of the Aging Process

Telomeres may be one key to the aging process. Telomeres protect our DNA by acting as buffers at the ends of chromosomes. They have been compared to the plastic caps on shoelaces that keep the lace from fraying. Telomeres function as shoelace caps do, but they protect genes instead of shoelaces. The average cell divides between 50 and 70 times before cell death. Each time the cell divides, the telomeres on the end of the chromosome get shorter. Studies have shown that people with long telomeres live longer and healthier lives than people with short telomeres. 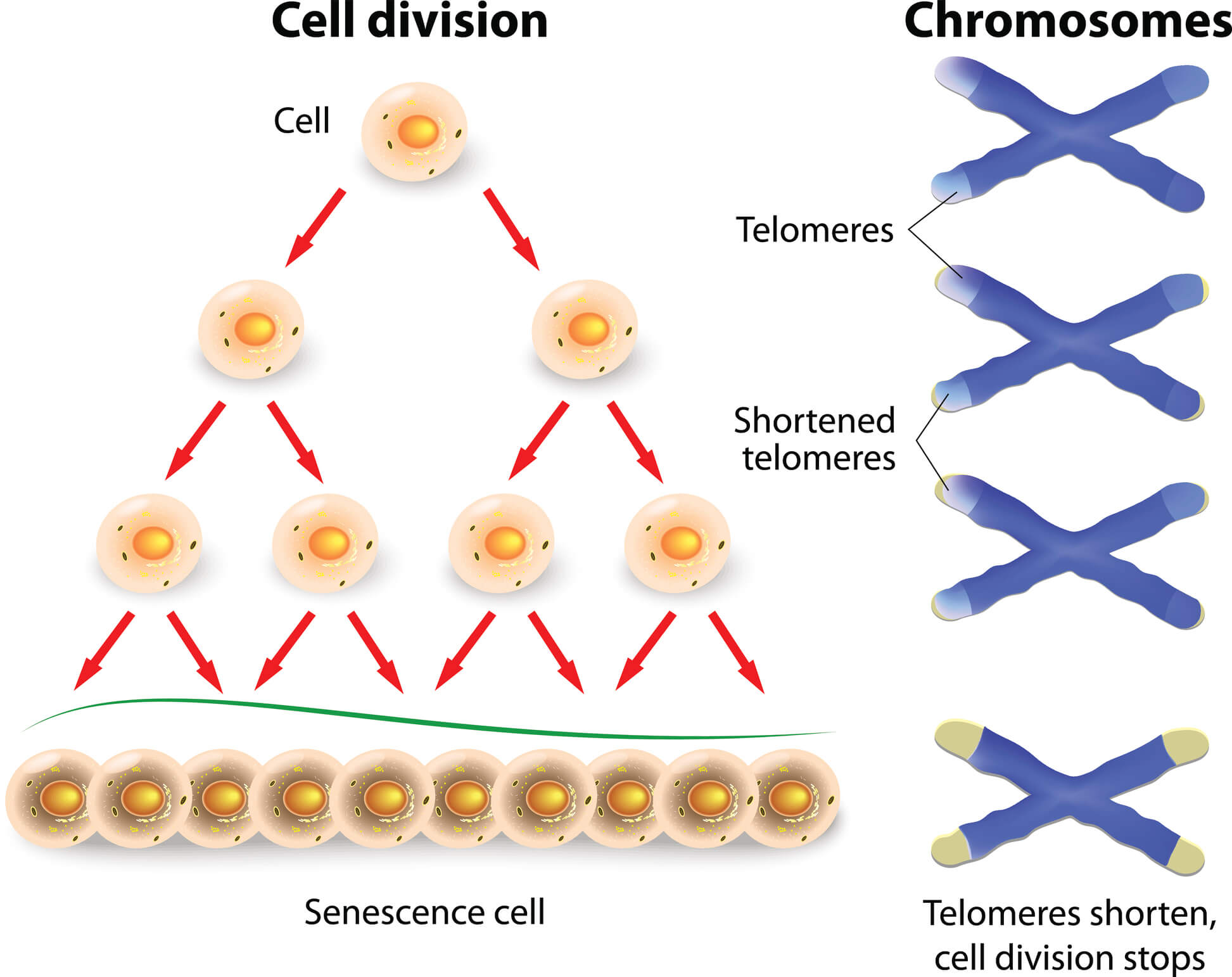 Telomerase Keeps the Chromosomes from “Fraying”

The telomerase enzyme rebuilds telomeres and keeps DNA from fraying. In 2009, scientist Elizabeth Blackburn was awarded the Nobel Prize for her discovery of telomerase, found in the roots of bristlecone pines but also in humans. (The oldest living organism on Earth is a 5,000-year-old bristlecone pine tree in the White Mountains of California. Bristlecone pines not only live long but also age well.)

How Can We Increase Telomerase and Protect Telomeres?

Many studies have connected plant foods to longer telomeres and higher telomerase activity. In a study published in the European Journal of Nutrition, data from 3,660 U.S. adults looked at diets rich in carotenoids and telomere length. The study found that a carotenoid-rich diet was linked to longer telomeres. Carotenoids are the organic pigments responsible for the bright colors of many fruits and vegetables.

In 2008, Dr. Dean Ornish teamed up with Blackburn and found that just three months of eating a plant-based diet significantly boosted telomerase activity. In a 2013 follow-up study published in The Lancet Oncology, Ornish noted that telomere length had actually increased in the plant-based diet group. While the group eating plant foods also exercised and lost weight, other studies have shown that even more vigorous exercise and similar amounts of weight loss have not affected telomere length. And in a 2013 review, fiber (found exclusively in plant foods) was associated with longer telomeres. Plant foods are filled with antioxidants that can fight the oxidative stress responsible for telomere shrinking, preventing and even reversing cellular aging.

Another antiaging mechanism involves the enzyme TOR, which stands for “target of rapamycin.” Rapamycin was discovered in the 1970s in Easter Island in the southeast Pacific Ocean. It suppresses the immune system and is given to transplant patients to prevent the body from rejecting the new organs, but it also inhibits TOR, an engine of aging and age-related diseases. When TOR is activated, cells grow and divide; but when it’s turned down, cells go into conservation mode and clean up and recycle old proteins. TOR-driven aging is likened to an engine on a race car going at 100 mph without brakes. When we are young, the engine runs at full speed, pummeling through the roads and soaking up fuel as we grow into adults. It’s then time to slow down, yet our “cars” continue at 100 mph.

Why? It’s how we evolved. In the wild, most living organisms don’t live long enough to age and thus have no use for breaks. In 1600s London, 75 percent of people died before they reached age 26. We evolved mechanisms to make sure our bodies run at full speed so that reproduction happens before death. But problems arise when the car continues at full speed. TOR is involved in cancer, heart disease, diabetes, Alzheimer’s, and other diseases.

How Can We Slow Down TOR, the Engine of Aging?

Changing our diet may be the best way to slow TOR down. Rapamycin can inhibit TOR, but it comes with side effects since it suppresses the immune system, making people vulnerable to infections. Caloric restriction also inhibits TOR, but eating too few calories can leave you feeling weak and hungry and is difficult to sustain. Is there a better way? Yes. Increasing your intake of plant foods can help. Eating less animal protein has been shown to hamper TOR activity, mimicking the effects of caloric restriction without the side effects. A 2012 paper found that the amino acid leucine, mostly found in animal foods, has the greatest effect on TOR signaling compared to other proteins. On the other hand, fruits and vegetables have phytochemicals that function as natural TOR inhibitors. The cancer-protective effect of plant-based diets is thought to be in part due to TOR down-regulation.

Aging is complex. Aside from telomere dysfunction and TOR signaling, other molecular pathways as well as genetics can play a role. But the food you eat makes a big difference in the length and quality of your life by affecting some of these pathways. We’re also learning that food can change the expression of genes involved in aging. Luigi Fontana, director of the longevity research program at Washington University in St. Louis, said that about 25 percent of your risk of death is due to genetics. Of the remaining 75 percent, diet is likely the most important factor.

People in the “Blue Zones,” or the longest-lived populations in the modern world, are less likely to succumb to age-related diseases. They eat plant-centered diets. In Okinawa, Japan, one of the Blue Zones, plates carry indigenous vegetables like purple sweet potatoes and bitter cucumbers along with other fruits, vegetables, grains and legumes.

Medical, cosmetic, and technological advances have allowed people today to look younger and live longer, but most people are not living better. To that end, plant foods are the best answer yet.

Montefiore Health System Now Plays Forks Over Knives and Serves Plant-Based Meals at Patient Beds
March 9, 2017
Most Doctors Want You to Get Healthier, and are not in Bed with Big Pharma
February 7, 2017

Dr. Shilpa Ravella is a gastroenterologist and assistant professor of medicine at Columbia University Medical Center where she directs the Adult Small Bowel Program, managing the medical care of adult intestinal and multivisceral transplant patients. Dr. Ravella holds a BS in Biology from MIT and an MD from the University of Pittsburgh and has advanced training in nutrition and inflammatory bowel disease. She also contributes to The Atlantic, Slate, Discover Magazine, PBS and TED-Ed.