I Stopped Eating Meat for the Animals, But Was Thrilled When Excess Weight and Health Issues Also Disappeared

I was in pretty good shape as a teenager, but once I hit adulthood, my pants size exploded. After high school, I spent most of my life glued to a chair, whether I was in college, at my IT job, or in my car fighting LA traffic. When hunger hit, I cruised into the convenient drive-throughs and ate out a few times a week at restaurants.

My kitchen skills were weak, so my homemade dinners consisted of Mexican-style skirt steaks, filet mignon, or marinated chicken cutlets on the grill with rice and a few vegetables. My Latino-American background meant that I enjoyed many traditional ways of grilling meat and using various animal parts and animal byproducts.

New! How to Eat Plant-Based

Back in stock – for a very limited time! Our brand new beginner’s guide shows you how to take charge of your health destiny.

I spent most of my 20’s fluctuating between being 30 to 40 pounds overweight. I had trouble sleeping and was frequently bloated, sluggish, and very unhappy with my physical appearance. I knew I had to start exercising and changing my eating habits, but I lacked motivation and knew nothing about nutrition. At one point, I joined a local soccer league and played weekends, but I was too slow and would quickly become fatigued.

One of my friends, a sociology professor, was a vegetarian. We had lengthy philosophical conversations about society and human cultures around the world. Eventually, the topic of veganism and the ethics behind it came up in conversation. I learned about the meat and dairy industries, factory farming, and all the needless animal cruelty that comes with raising animals for slaughter. He made me reconsider and reflect on how my earliest influences and culture shaped the way I view animals. I eventually overcame my own ingrained beliefs about raising animals for food and realized I didn’t want to eat meat anymore. However, I was still skeptical about the idea that I could meet all my nutritional needs with plant-based foods.

I spent weeks reading books and articles about plant-based nutrition, and deciding to make the transition turned out to be much easier than I thought it would be. In my research, I learned that millions of people all over the world live healthier lives by reducing or not eating meat and animal byproducts. I also realized that regular grocery stores were filled with plant-based foods (fruit, vegetables, whole grains) and that those staple items were cheaper than buying meat. So not only was eating a plant-based diet good for my health, the animals, and the planet, it was also good for the wallet. I made the switch to a plant-based diet about seven years ago, and I’ve never looked back.

After I made the switch, I was able to easily drop the extra 35 pounds I had been carrying around without dieting. In just a few short months, I was also sleeping like a rock and no longer felt sluggish. I was suddenly full of energy! I’m an entrepreneur who spends about six to eight sedentary hours a day working on my laptop, but it’s still easy for me to stay slim and fit on a healthy plant-based diet. I stay active but don’t have to kill myself at the gym anymore: I spend about four hours a week at the gym and go on regular walks and hikes with my three Siberian huskies. When I do push myself hard at the gym, I tone up and lose unwanted fat quickly.

I still sometimes have a vegan pastry with my morning coffee before I start my day, but I indulge and enjoy whole plant foods for lunch and dinner. I love anything with potatoes and sweet potatoes, and could have pancakes, oatmeal, and waffles for any meal of the day! I also love baking, so I’ve shifted to baking bread and creating my own plant-based desserts like a killer devil’s food cake without any eggs or dairy. My partner and I love making and sharing recipes, and it has even become part of our business.

It’s been about seven years since removing all animal products from my diet, and it is by far one of the best decisions I’ve made in my life. I’m extremely thankful to the friend who opened my eyes to the ethical and environmental issues in raising animals for food, as well as the health benefits of eating a plant-based diet. 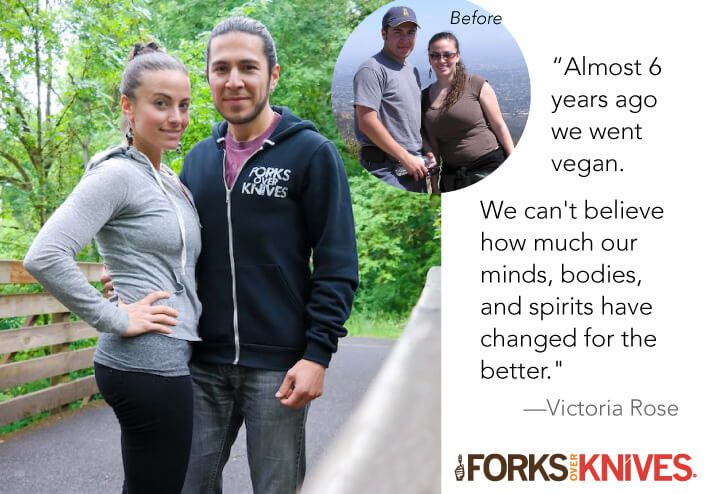 I Went Plant-Based for Glaucoma. Losing 110 Pounds Was a Surprise Bonus
January 3, 2020
Our Most-Shared Success Stories of 2019
December 30, 2019
I Overcame Chronic Fatigue After Going Plant-Based
December 9, 2019